Fighting games. It’s probably been a while since you’ve played one. Maybe you’ve seen a few releases here and there, or a trailer at a developers’ showcase. If you’re Australian, the last fighting game you probably played was Tekken 3, for the PlayStation 1.

I think that for some people, fighting games are a fad of the past. A popular genre in the 90s that died when the arcades did. However – the story is a lot more complex than that. Fighting games have never gone away, despite the turmoil that the industry has gone through over the years. This story is about the crisis that fighting games faced, the passion of the players who kept it alive and the future for a genre that is on its way back to prominence.

A Brief History of Fighting Games As Part Of Pop Culture

The story begins on February 6th, 1991. Capcom’s Street Fighter 2 is unleashed onto Japanese arcades, and then takes the world by storm. Every single arcade had a Street Fighter 2 cabinet. From there, the idea of a “fighting game” was strictly embedded into the head of nearly every single gamer on the planet. Two people stand on opposite sides of an arcade cabinet, controlling a character each. They each have a set of moves they can use to beat each other up and deplete a HP bar at the top of the screen. This simple concept took advantage of a basic human urge – the desire to compete.

Street Fighter 2 was so successful that it was credited with the revival of arcades at the time. The average Street Fighter 2 arcade cabinet was making nearly USD$1500 a week in America alone.

The game had become a household name. Fighting games had hit the mainstream.

Midway’s Mortal Kombat came onto the scene on October 8th, 1992. Developed with the intention of competing with Street Fighter 2, the game had numerous features that made it incredibly popular – but also, incredibly controversial.

The game had a unique control scheme and a striking visual style that had come from using digitised recordings of actors, instead of the 2D hand-drawn sprites of its contemporaries. However, it became clear that Mortal Kombat’s true popularity really lied in its most well-known feature “Fatalities”; a violent and bloody finisher that could be unleashed upon an opponent at the end of a round. In retrospect, these finishers are incredibly tame and cartoonish – but at the time, they were shocking. Fretful parents and moral guardians were outraged by this wanton and gratuitous violence and calls for censorship of video games soon became a hot-button discussion topic. As the controversy spread like wildfire, Mortal Kombat would only gain more popularity.

It became the biggest selling game on the PlayStation and raised the stakes for what fighting games could be in the public eye. Tekken would go on to see phenomenal critical success in its two sequels, Tekken 2 and Tekken 3. Both of these games are considered landmark titles for the genre, and they were both considerably more successful than the floundering Mortal Kombat franchise or the waning Street Fighter series.

For a lot of people – Tekken 3 was the end point for new fighting game releases. It was incredibly popular, had clean gameplay and dominated both the arcades and the home console market. As time marched on, western arcades started to die out. Entire genres of video games were dropping dead. Street Fighter 2 still had a presence at the arcades – but the series stopped releasing new games after 2000. Mortal Kombat was nowhere in sight. The slow disappearance of arcades meant no new fighting games were in the public eye, and the zeitgeist officially came to close – ending a chapter of video game history.

At least, that’s what it seemed like. However, under the hood of the changing mainstream, fighting games continued to hold onto relevance through the successors to arcades – consoles. Two franchises in particular stand out in this field – namely Tekken, which had established an incredibly strong console presence with PlayStation, and a brand-new franchise known as Super Smash Brothers.

Nintendo’s Super Smash Brothers was first released for the Nintendo 64 in 1999, and it instantly became a hit. A grand crossover between every Nintendo franchise meant that it had a pull unlike most fighting games at the time – Mario fighting Pikachu was a draw that few games could match.

When the game got a sequel in 2001 – Super Smash Brothers. Melee – it quickly became one of the most popular fighting games of the era and was the best-selling game on the GameCube.

The crossover appeal of Super Smash Bros. Melee saw it get tournaments almost immediately after release. This scene went completely unsupported by Nintendo. It was even condemned by the developers, who saw Smash Bros. as a casual experience. Nonetheless, it grew to an incredible size. While nearly every other fighting game was struggling, Super Smash Brothers. Melee was experiencing what is now known affectionately by fans as the
“Golden Age.”

Meanwhile, Tekken was still going strong. Tekken 4 and 5 both saw great success and were competitive mainstays. Despite the focus for most competitive fighting games being Japan and the United States, it quickly became clear that Korea had become very strong adopters of Tekken. Their arcade scene had never fallen off in the way that it had in the western world, and Tekken had become the face of Korean arcades. Throughout the 2000s, Tekken saw an eruption of international competition from Japan, Korea and the United States, all while holding down incredibly solid sales numbers.

On the sidelines, new fighting games were still releasing. Capcom was still releasing smaller yet still successful games like Marvel vs Capcom. Guilty Gear was starting to take a hold in smaller, niche communities.

Despite the long hiatus of the Street Fighter series, Street Fighter 3 still saw a lot of competitive play in both local and national tournaments. The committed players that were at the core of the arcade scene back in the day had never left – they had simply migrated to local tournaments run on a grassroots level.

In 2007, the fighting game world stood still for a brief moment when Street Fighter 4 was announced at a press event in London. Within two years, it was on consoles and in arcades. While the infrastructure for competition had been built over the last few years of comparative silence, Street Fighter 4 brought in millions of new players and eyeballs to a scene that was once thought to be relegated to the sidelines.

Some of the best players to have ever touched a fighting game like Justin Wong and Daigo Umehara made their triumphant returns as a result of this new release. The world was ready for the return of Street Fighter.

Street Fighter 4 sold approximately 9.3 million copies over its lifespan.  The number of new players was so extreme that the demand for competitive tournaments reached new heights. Suddenly, it seemed like every single place in the world was playing Street Fighter 4 – but this time, nobody had to compete with it. Instead, Street Fighter 4 became the gateway to an entire scene of fighting games.

People would enter to play Street Fighter, and then find themselves enamoured with Tekken, Guilty Gear or one of the many other fighting games that found themselves having a comeback.

Australian competition took off too. In 2009, Battle Arena Melbourne opened up – an inter-state fighting game tournament where Australia’s best would congregate to play, among other games, Street Fighter 4.

Today, smaller local tournaments are run all across the country. In Perth alone, numerous weekly fighting game events are held by various different parties – some hosted by official organisations looking to support a community, others are held by fans, who just want to see their favourite games thrive.

The explosion of fighting games has meant that the community has become more than just a place for competition – but a place to meet and connect with people who have similar interests.

The future of fighting games remains bright – both in Australia, and internationally.

In other words: Fighting games aren’t just coming back – they are here, and they are making an impact.

The same can be said for the people who compete. Even during the heights of the COVID-19 pandemic, online tournaments persisted and kept interest. As the world comes back out of isolation, the fighting game community comes back with renewed passion and motivation. Officially supported circuits like the Smash World Tour, Capcom Cup and the Tekken World Tour means that the publishers and developers of the biggest fighting games are financially promoting and supporting local tournaments – including ones in Australia. Battle Arena Melbourne is officially supported by the Smash World Tour as well as the Capcom Cup, for instance.

From 1991 to 2022, fighting games have endured the changing tides of the industry. From the top of the world in the 90s, to the underground in the 2000s and back on the rise again now, the passion of the broad fighting game community internationally has continued to ensure its relevance and success.

The community fostered around competing in fighting games has become about more than just winning or losing – for many people, including me, it has become a second home. 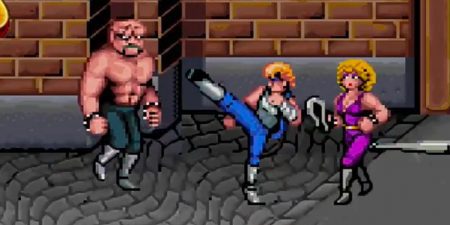 If ever there was an arcade game that could be considered the ’80s rock star of gaming, then surely, Double…