Final Fantasy XIV Online Announces A Plethora of Merchandise, But Are They Worth It?

While there were some fans who were expecting even more news about the next expansion, Endwalker, it was quickly pointed out at the beginning of the Live Letter that like other FanFest’s, this would be about content in the current expansion.

Along with news about Patch 5.55, which was also revealed to be launching on May 25, a large line of collectibles and collaborations were shown. Some of them are affordable while others will leave quite a hole in your wallet.

Yoshida, aka Yoshi-P, kicked off this section of the Live Letter with the announcement of a collaboration with Citizen watches. Two different watches were shown which tie into the theme of Darkness and Light which we’ve seen throughout the current saga on Final Fantasy XIV Online. 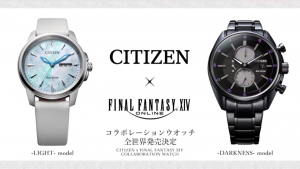 Yoshi-P was even wearing the Darkness-themed watch himself whick looked quite large on him. However, the reasoning behind this was because Yoshi-P wanted a watch to match with his style. Yoshi-P is known for wearing many rings and has sort of a chunky aesthetic about him when it comes to jewellery.

This lead to the chunky look of the watch, which may or may not be everyone’s style. The all-black watch features purple symbols in place of numerals on the watch face. While I personally find it aesthetically pleasing, I would probably pass on buying the watch just from how chunky it looks while wearing it. 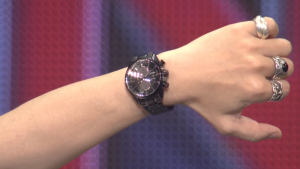 The Light model however is smaller in size and comes with two different bands – a basic white band as well as a sparkly band. The Light model also features illuminated watch hands. Both models come in very different boxed packaging and, surprisingly, different price points.

The Darkness model is priced at 44,000 yen while the Light model is cheaper at 38,500. Converted, Darkness would set you back just over $500AUD while Light would be around the $450AUD mark. But I wouldn’t be surprised if the localized price jumps up even higher than that. And unfortunately, we won’t know until a later date.

This sleek black electric guitar features a meteor emblem on the neck of the guitar, which is made of a special kind of wood called Dark Wood. It also features actual crystals embedded into the top and bottom of the guitar, with one end being blue while the other is pink. 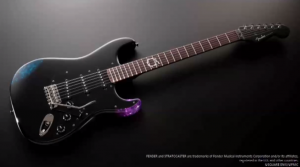 Another feature which scream Final Fantasy XIV Online is the second Tone dial. What I mean by that is that there are three dials on the special edition Fender, including a volume and tone dial. However a 2nd tone dial is also feature but doesn’t actually do what it’s meant to.

However if said dial is pressed in, it makes the sound “burst”. This is considered the “Limit Break” switch. However, we haven’t seen it in action just yet but can expect to see what all of this really means when it’s shown off during a performance by the band, The Primals, which will wrap up FanFest later today.

Before you start pre-ordering though, it’s going to cost Australians a lot of money. For American fans, they can pick up a Final Fantasy XIV Online Stratocaster for $3499.99USD while us here in Australia will be paying $6499AUD which even with the conversion rate is quite alot. It’s an additional $2000 on top of the converted yen price. There is a much cheaper option though as an in-game version will be made available in this patch.

A plethora of other collectible were shown during the Live Letter as well including some really neat items and some that were kind of questionable There were job stones in the form of magnets, foldable eyeglass cases with job symbols printed all over and a trio of wine glasses with Ascian Sigils printed on each. 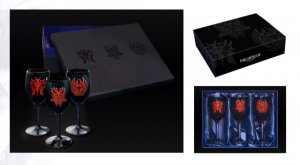 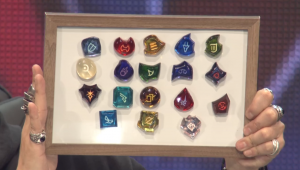 And then there were others which I personally didn’t feel would be worth it or wouldn’t be available to purchase from Australia. These included an “Eshay-style” sling bag, a glowstick (which is only available in Japan) and a key-case. Which I personally have never heard of until today.

A 4-vinyl LP set featuring music from the base game and the first 3 expansions was also shown but is an item I’ve seen before. It’s another very cool item but from what I’ve heard it’s an item that would be difficult for Aussie fans to get their hands on.

As a longtime fan, I’d love to get my hands on at least half of the items that were showcased. However, because of the jump in localised pricing and the difficulty in obtaining them in Australia means I probably won’t obtain more than one or two items.

But I do admire the work Final Fantasy XIV Online have put into their merchandise/collectibles. Especially the collaborations with Citizen and Fender. Even if they are the most expensive of the lot.