IT’S almost been seven years since 2.0 was launched, bringing a breath of fresh air to Final Fantasy XIV Online. After the rocky launch of 1.0 in 2010, the MMORPG was destroyed in and out of game and given an entire revamp. And the results show now with 3 expansions and 20 million registers players later. To celebrate the 7th anniversary of Final Fantasy XIV Online on August 27, Square Enix are giving players around the world a chance to have their favourite screenshots printed. The first 1000 players from each region to send their screenshots will have their screenshots printed in high quality and sent to them. The photos will also come with a commemorative border to celebrate the 7th anniversary.

However, there are certain conditions that must be met to be eligible. The lucky top 10 screenshots from each region will also be compiled for the anniversaries digital gallery. You can submit your screenshots for Final Fantasy XIV Online’s 7th anniversary here. 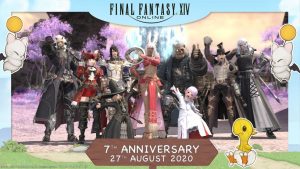