THERE’S still a little over four months until the launch of the new expansion for Final Fantasy XIV Online, Endwalker. However, there’s still a plethora of content to be a part of before the expansion launches on November 23. The most recent Letter from the Producer LIVE broadcast unveiled a plethora of content that’s part of the MMO’s roadmap between now and Endwalker’s launch. The benchmark software for Endwalker was also launched over the weekend for PC players.

The benchmark contains in-game area’s to test out on your own PC hardware to get an idea of how Endwalker will run for you at launch. An updated character creator has also been included for you to design your male Viera characters early and appear within in-game benchmark area’s. 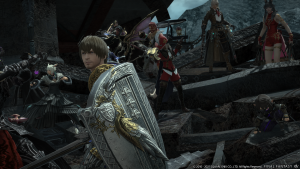 Outside of the benchmark, Final Fantasy XIV Online players will have plenty to do over the coming months with a myriad of events planned in-game. Starting with the Make it Rain event running from July 19 through until August 11. Players will be able to get their hands on a special “Vexed” emote by completing event quests during the campaign. On top of that, bonus MGP is rewarded when taking part on Gold Saucer activities. A day later, Patch 5.58 will be released which will also mark the beginning of Season 20 of Final Fantasy XIV Online’s PVP arena, The Feast.

Eorzea starts to heat up in August as the Moonfire Faire summer event starts on August 13. However the highlight for the month will be The Rising which begins on August 27. The Rising celebrates 8 years since A Realm Reborn launched, which reinvigorated the MMO for the better. In September, Noctis Lucis Caelum from Final Fantasy XV returns for another collaboration event. Starting on September 13, a new questline will be made available to those who are at least level 50 and finished the main scenario quest “The Ultimate Weapon”. A plethora of items will be rewarded during the event, including Noctis’ hairstyle and outfit and a four-person Regalia mount.

The Moogle Treasure Trove Event returns on August, allowing players to trade in irregular tomestones for rewards from October 19 through until November 19. And finally, Early Access for Endwalker begins on November 19 for anyone who pre-ordered the expansion. There’ll also be post-launch events taking place during November and December, All Saints’ Wake, Starlight Celebration and Heavensturn.