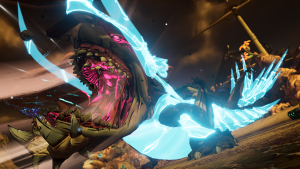 2K and Gearbox announced today that the first of four scheduled DLC’s for Tiny Tina’s Wonderlands will be released this Friday. The news of the first DLC, titled “Coiled Captors”, comes less than a month after Wonderlands’ initial launch. Available with the Chaotic Great Edition, Season Pass or as a standalone purchase, Coiled Captors will introduce a plethora of new content for players. Including new areas, enemies, loot and Legendaries. 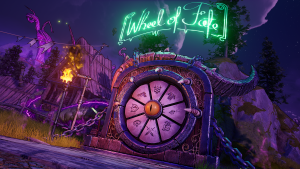 Coiled Captors takes players to a frozen new area called Dreamveil Overlook. From there you’ll be tasked with the mission of hunting down an Old God. The Coiled naga trapped said Old God within a new boss called Chum, a giant shark-like seawarg. And it’s up to you to free him. You’ll also meet Vesper, the fortune teller who sends you on your frosty journey. She also brings her Wheel of Fate, where you can spend Lost Souls to spin for Legendary loot and other items.

This new endgame content will also available within the Chaos Chamber once players finish the Coiled Captors campaign. And according to the trailer found below, the new challenges we face against Chum will evolve every week.

It was also announced over on the official Tiny Tina’s Wonderlands Twitter page the names of the next three DLC’s – Glutton’s Gamble, Molten Mirrors and Shattering Spectreglass. The release dates for each are yet to be known.