ONE of my favourite FMV games in the last few years is getting a sequel! Back in 2020 (yes, that’s a long time ago now) Wales Interactive released a dating sim called Five Dates, a game that in the middle of the pandemic, showed how people could still find love is now returning with Ten Dates.

A surprising game with fun acting and different characters to romance is now just in time for Valentine’s day and expanding with options from the original.

As the sequel to Five Dates, the live-action FMV game will star Misha and Ryan, two millennial Londoners in search of their special someone at a speed dating event. Ten Dates will star talent from an array of hit television shows including Rosie Day (Outlander), Kaine Zajaz (The Witcher), Charlie Maher (Conversations with Friends), Meaghan Martin (Camp Rock), Ellie James (I May Destroy You), and Rhiannon Clements (Death On The Nile), not to mention Paul Raschid (Director and Writer)

In the launch trailer, speed daters witness how their choices can strengthen or weaken relationships with potential love matches. As Misha and Ryan attempt to charm five distinct personalities each, they’ll face daunting ice-breaker challenges, shocking revelations, and plenty of awkward moments. Long conversations and deep questions lead to a variety of different outcomes. Streamers can take a moment to consult their audience before making game-changing decisions.

‘Attraction, dating and love are universal experiences we can all identify with,’ says director and writer Paul Raschid, ‘Our ambition for ‘Ten Dates’ was to expand the world of ‘Five Dates’ into a richer and more authentic range of dating options. The writing team included LGBTQ+ consultants who we worked with closely across the interactive storylines. We hope the result is a more inclusive experience which encourages people to try a variety of suitors. I’m really proud of what we’ve achieved and hope the audience will feel the same way.’ 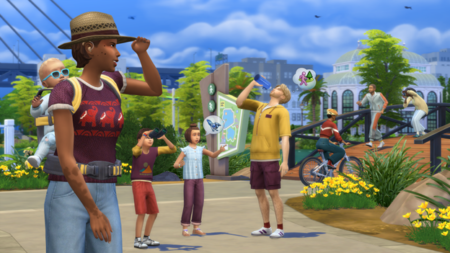 The Sims 4 Expands with the Growing Together Expansion Pack