Future of Borderlands 3 Revealed During PAX

Today marks one year since Borderlands 3 launched worldwide. Since then we’ve seen many free events along with four paid DLC launches, the most recent launching just two days ago which also came with bittersweet news. Psycho Krieg and the Fantastic Fustercluck’s launch saw the largest level increase for Borderlands 3, increasing the level cap for all players by 5. However, Gearbox and 2K also announced that this was also the last level cap increase for the foreseeable future. What was in the pipeline for Borderlands 3 had been shrouded in mystery…until now.

Coincidentally, the Gearbox PAX Digital Showcase was also held in the early hours of this morning. While looking back at the games first year, Gearbox and 2K also announced what they have planned for its future.

Straight off the bat though, crossplay is coming. Gearbox teased that in time we’ll see more news about in the future.

Of course, it’s no surprise with the launch of next-gen consoles around the corner that there would be news of a next-gen version. Borderlands 3 will also be available for Playstation 5 and Xbox Series X at an unspecified date. However if you don’t already own it, we might suggest you pick up a copy early if you see it on sale. Owners of the game on current-gen, along with any purchased DLC, will get a free next-gen upgrade. The next-gen upgrade will also transfer save files so you can instantly pick up from where you left off. Except this time will be in 4K resolution at 60 frames per second. Hopefully this also means a long line of content is being planned for years to come and it’s not just, “Borderlands 3, but make it next-gen.” 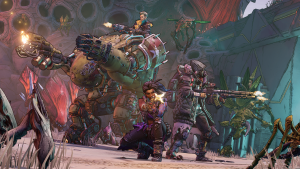 A much requested 4-player split-screen and 2-player vertical split screen for local co-op will also be added to the next-gen version, with the latter also coming to current-gen in a future patch.

Along with next-gen plans, more paid add-ons are on the horizon. But we’ve been told not to expect the usual DLC campaign. Gearbox mentioned that we’ll be getting a new game mode instead. Since the Season Pass has technically completed its life-cycle, it’s more than likely as a Season Pass owner that you will have to pay extra for this future DLC content.

Nothing more was mentioned about what the DLC or mode could entail and it’s going to be months before we find out more. However they did share how they’ll be expanding skill-set options for each vault hunter.

The future DLC will also contain one new skill tree per vault hunter. Unlike Borderlands 2 and The Pre-Sequel, we obviously won’t be seeing new vault hunters joining the new crew anytime soon. Instead, they seem to be filling in that void by adding more options to each vault hunter. Even though they’ve kept very tight lipped for the most part, Gearbox were kind enough to give a sneak peek at what additions they’ve given to Fl4k’s new skill tree aptly named “Trapper”.

Fl4k will have a new Action Skill called Gravity Snare, as the name suggests this a trap which throws enemies upwards and then slams the back down again. Like most Fl4k builds being played around with, this skill tree is all about survivability for both him and his pet. And since Fl4k has a new skill tree, this also means a new pet.

The Hyperion Loaderbot packs a mixture of ranged and melee attacks depending on the path you take in the Trapper skill tree. While shooting projectiles and charging at enemies already seems familiar, It’s WAR Loader option sounds like a lethal combination of powerful attacks. It’s an incendiary shotgunning, grenade throwing and homing missile launching mega combo of attacks rolled into one.

Keep your eyes peeled for more updates in the future DLC, new skill trees and what’s to come with the game mode.