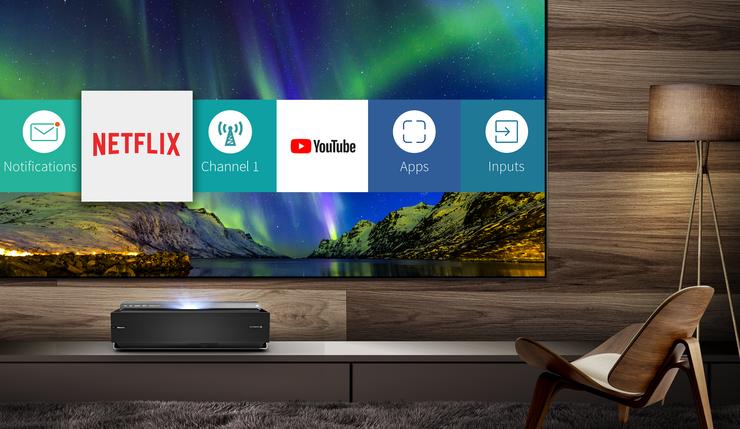 GIVEN we are now into the third decade of the 21st century, it’s only fitting we’re starting to see some space-age entertainment technology appear.

While most of us are familiar with LCD and LED TVs, one of the developments shown off at this year’s CES in Las Vegas was a laser projector TV from electronics and appliance manufacturer HiSense.

HiSense are well known for their flat panel TVs, and have recently branched into laser TVs (essentially projectors using laser rather than incandescent bulbs or LEDs).

The TriChroma Laser TV is the latest offering in the range, with 4K HDR resolution, vibrant colour and – this is the particularly interesting bit – truly massive screen sizes, witn the range starting at 100” and going via 120” to a 150” screen option, if you’re Bruce Wayne and need something to watch in your gigantic mansion.

As the name suggests, a TriChroma laser TV uses lasers in the primary colours of red, green and blue to create its images, and having seen the TV in action for myself at CES I can confirm it is extremely vibrant, sharp, and bright – the unit can output at 3200 lumens.

The result is a TV which is so large and so bright it’s probably visible to low-flying aircraft – it was certainly visible from the other side of the not insubstantial HiSense booth at CES.

The projector base unit also includes a built-in TV tuner as well as apps for the main streaming services, too, and according to HiSense, the TV’s colour gamut covers 90 percent of the colour space perceivable by the human eye.

From a gaming perspective, laser TVs have a ridiculously fast refresh rate equivalent – much faster than an LED TV – and the TriChroma model also has motion smoothing software on board too.

While I didn’t have a PlayStation or Xbox handy to hook up and see how it went, given how smoothly the unit displayed the sporstball it was showing, it would certainly appear to be quite capable as a gaming setup too.

The screen itself does not require any power – indeed, you could project directly onto a blank wall if you really wanted to waste the potential of your laser TV – but it has been specially designed to work with the projector, calibrated to catch the lasers at the optimum angle and so on.

From a sound perspective, the unit has 13 in-built speakers and a wireless subwoofer, running Dolby Atmos.

HiSense have confirmed the TriChroma Laser TV will be available in Australia in the second half of the year, with pricing still being worked out – but they did confirm it would include their “White Glove Service”, whereby a technician comes out to install and calibrate the unit.