LAST years NBA 2K20 was the first in the franchise to feature the WNBA. However they were only featured in one game mode, tucked away from being part of the more popular game modes such as MyTEAM and MyPLAYER. Fans have been begging for the WNBA to be given a much larger spotlight in the game. Up until now it looked as if we were out of luck for another year. But according to the latest Courtside Report, Visual Concepts and 2K have even more surprises up their sleeve in regards to the next-gen of NBA 2K21.

Senior Producer Felicia Steenhouse shares information about the extensions made to the WNBA League in-game while also revealing a brand new experience called The W. “You’re going to love this,” says Felicia. “Fully customizable. Multi-season. WNBA Franchise mode. This is MyWNBA!” MyWNBA expands from what the WNBA MyLeague mode was in NBA 2K20 and current gen NBA 2K21. Felicia explains in the Courtside Report how you can sit in both the GM and commissioner’s chair to create a fully customizable WNBA league of your own.

“From rules, to finances, CBA, draft, and everything in between. Use 2K presets for a different experience, or download shared settings from the community,” Felicia explains. “Skip the season altogether and get straight to the playoffs in Playoff mode. Want to play with friends? Got you covered with Online Leagues. Turn on role playing elements to experience the WNBA from a GM’s perspective.

The biggest addition however in regards to the WNBA will be what’s called The W, introducing a long awaited female equivalent of MyPLAYER. Most attributes of the MyPLAYER feature will be the same including full player customization via both in-game settings and the face scanning option through to player type and attributes. There are 18 player types including:

Felicia explains however that career progression happens off and on the court. “we felt it was important to let players experience what it means to be a WNBA player on and off the court. In order to do this, we built the mode on the foundation of a set of different pillars that track the progress of your MyPLAYER and the league.” says Felicia.

According to the Courtside Report, Progression via the use of MyPoints and Popularity seems to be the same. However its the addition of the WNBA Popularity, Player Wealth and Teammate Chemistry systems that make progression more interesting.

Off the court your WNBA MyPLAYER is able to take on one of five different jobs: Coach, Entrepreneur, Global Icon, Fashion Icon and Influencer. Each of these jobs also focus on a specific attribute to your players growth. Becoming either an Entrepreneur or Fashion Icon benefits your wealth. The latter can also boost your popularity, with becoming an Influencer or Global Icon doing the same. Going down the path of Coaching will mostly helpy with MyPLAYER progression as well as Teammate Chemisty. 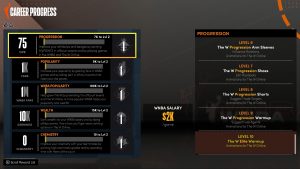 WNBA Popularity, Teammate Chemistry and Wealth all go hand-in-hand with each other. Increasing WNBA Popularity on and off the court not only means more opportunities to gain a larger League audience but will also increase your paycheck. Having a good rapport with teammates will also help with both popularity and wealth. It’s best to be humble about your success but also why not show it off by spending it on exclusive gear you can wear in The W Online.

Before you get too excited, The W Online isn’t the 5v5 experience you’d expect from the OG MyPLAYER. Instead these are 3v3 multiplayer matches very much like those in the Neighbourhood or Triple Threat. According to Felicia, unlocking level 10 gear is the pinnacle of your profession and apparently The W Online is the place to go to show the world what you’ve got.

Next-gen NBA 2K21 is becoming more and more exciting as we get closer to launch day. The expansion of the WNBA in-game shows not only how far we’ve come but also how the developers are listening to their fans.