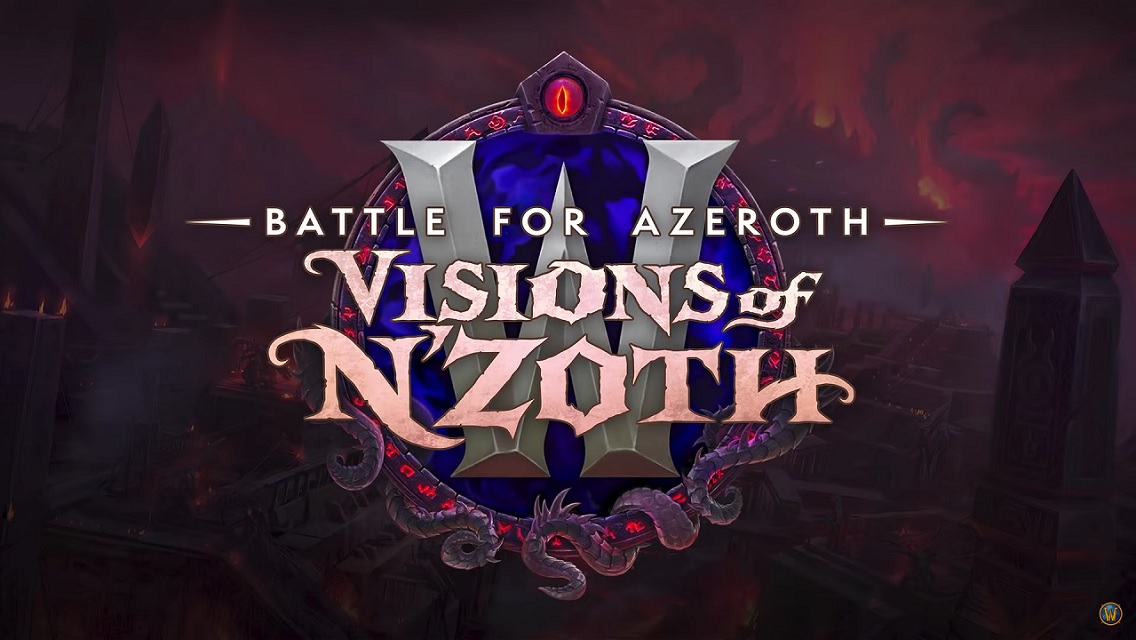 Early Tuesday morning, Blizzard published an 18-minute video with Game Director Ion Hazzikostas showcasing their next free update to World of Warcraft’s Battle for Azeroth, Visions of N’Zoth. Before we were given details of this update, a quick recap was given of the launch period of WoW: Classic. Coming later this year is phase 2 for the Classic servers containing Dire Maul, world bosses and the PvP honor system. Well, the legends at Blizzard are breaking protocol by giving us access to Dire Maul next week from October 15. World bosses and the honor system will come at a later date.

Patch 8.25 saw the end of the Battle for Azeroth war campaign. For those wanting an amazing recap of the action in all it’s cinematic glory that Blizzard are well-known, there’s a 23 minute collation of all the major scenes from the expansion. It’s amazing watch when it’s all tied together.

With that comes patch 8.3, Visions of N’Zoth. Whilst the war between Alliance and Horde may be over, there’s always a threat looming over the horizon. This time, it’s in the form of an Old God N’Zoth who has been unleashed in their dark fury, free of all shackles, threatening to tear down the thin veil separating him and Azeroth. The first sign we’ll witness this occurring is in the form of assaults by his minions on Titan facilities in Uldum and the Vale of Eternal Blossoms. The Vale in Pandaria has been cleansed and restored to its original Mists of Pandaria appearance. When the assaults are active, these entire zones will be overthrown into an alternate reality and plagued by N’Zoth’s lieutenants and minions. Players will need to work together to defeat them and solve puzzles to gain access to special treasures.

By completing assaults, you’ll be able to earn your way into the deepest and darkest corners of N’Zoth’s mind, in horrific visions. These horrific visions are 1-5 player content centered around the capital cities of Ogrimmar and Stormwind, showing alternate realities of what could happen if we don’t succeed against N’Zoth. Your first runs will end in quick defeat as your mind is taken over by N’Zoth’s assaults. You will retreat these early runs but you’ll leave with things you’ve learned along the way to build better defences for future runs.

You’ll work with Wrathion, son of Deathwing who will give you an upgradeable legendary cloak. This cloak will help you against N’Zoth’s mind-draining attacks, allowing you to go deeper into the visions, earning greater rewards and unlocking some of the mysteries behind N’Zoth’s power. Eventually this cloak will come in handy when you eventually face N’Zoth himself. These horrific visions can be played solo or with a group of up to 5 players, with the difficulty scaling to the size of the group.

All of this is leading to a showdown against N’Zoth within a new 12-boss raid called Ny’alotha, the Waking City. In addition to the upgradeable legendary cloak, the Heart of Azeroth will have new levels with passive benefits and a new essence slot. New essences are earned by completing assaults, horrific visions, mythic+ season content, PvP, the Ny’alotha raid and more. Mythic+ keystone affix will reflect N’Zoth’s corrupting influence. When it’s active and you go into a dungeon, you’ll see black obelisks than can be interacted with. This will pull you into an alternate world where you’ll need to defeat a lieutenant. Defeating the lieutenant will throw you back into then world at the location where you defeated the lieutenant, as opposed to where you found the obelisk, potentially allowing you to skip to places.

Two new races are being added with patch 8.3 – the fox-like Vulpera of Vol’dun for the Horde (sadly, no Alpacas), and Mechagnomes for the Alliance. Unlocking the Vulpera requires you to have completed the Vol’dun level up quest line and be exalted with the Voldunai. You’ll then be able to jump into Visions of N’Zoth, complete a quest line and unlock the race. For the Mechagnomes, they’ll require completion of the Mechagon storyline and Rustbolt Resistance, then you’ll unlock the Mechagnomes with the player’s choice of a robot arm or leg.

New heritage armour is being added for the Golbins and Worgen. Worgen finally get to wear a top hat! Blizzard are also overhauling the Auction House system which will be redesigned and rebuilt to remove single stack items, producing a more modernised, smooth and easy to use auction system. With this new method you’ll be able to purchase a portion of people’s stacks, as opposed to having to buy 3 from this person, 4 from the next, 10 from the next, and so on. You can also favourite items and create a shopping list for yourself of regular items, such as cloth for bandages, food for raids, and so on.

A lot of these changes are now live on the Public Test Server, with Multiplayer raid testing coming soon. There’s no release date yet for patch 8.3, Visions of N’Zoth but we’ll keep you updated when it drops! I reckon this is the kind of content that will get me back into playing regular WoW again. You can watch the full 18-minute preview below.