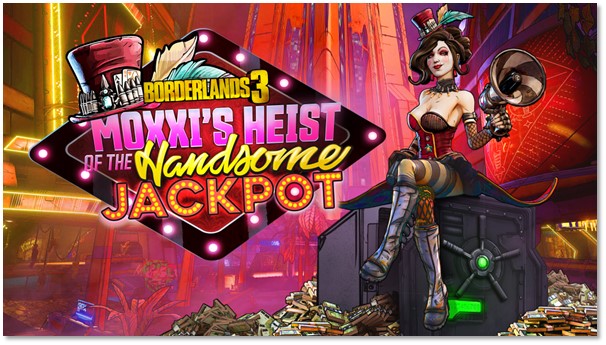 HANDSOME Jack’s legacy is being kept alive and it’s filled with loot, money and shiny neon signs. The first DLC for Borderlands 3, Moxxi’s Heist of the Handsome Jackpot, was revealed overnight on The Borderlands Show. Launching on December 19, the new campaign takes us to a derelict space station but it’s not the sort we’re used to. Handsome Jack built a gambling hotspot while he was still alive but stole all of the designs from Moxxi. And she’s recruited you to take it back.

It’s unknown how long the new campain is but it comes with a bunch of side quests along with never-before-seen enemies and new bosses to take down. And of course a bunch of new legendary weapons and gear as well as cosmetics. To access Moxxi’s Heist of the Handsome Jackpot you must unlock Sanctuary 3 and your character has to be at least level 13. Difficulty will obviously scale up for those at a higher level. Individual price for the DLC is also unknown but if you own the Season Pass or Super Deluxe Edition of Borderlands 3 than you’re already covered.

Also look out for the next patch for Borderlands 3 as it includes Takedown at the Maliwan Blacksite. This is new endgame content for squads of four max-level characters. And this is no walk in the park with deadly opponents and restricted respawn. Along with the new raid-style challenge Borderlands 3 introduces Mayhem 4, giving players only 2 random modifiers. One will affect them and the other will affect enemies. Playing in this mode will also drop legendary items exclusive to Mayhem 4.

A bunch more information was discussed during episode 3 of The Borderlands Show including dedicated boss loot pools, maximum bank space of up to 300 and Mayhem 2.0 which will be available next year. If you missed the episode you can catch it below.