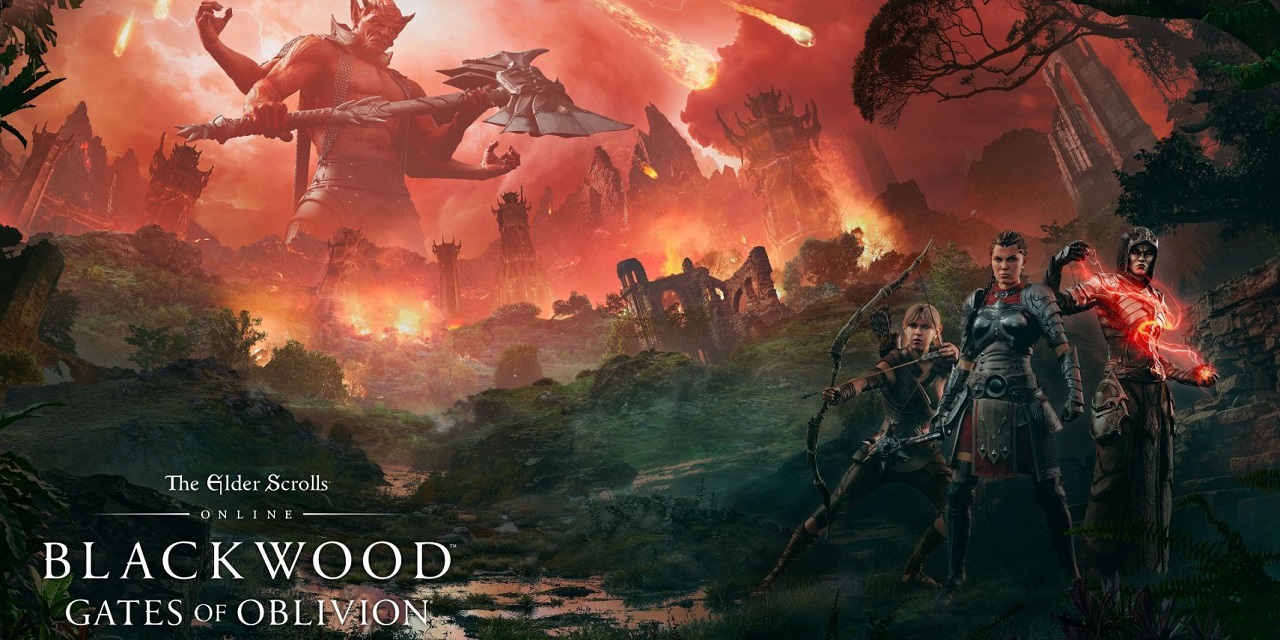 The Elder Scrolls Online: Blackwood is this year’s massive story chapter for the 7-year running MMORPG that boasts more than 18 million players as of January this year, which is incredible. The year long story approach is a great concept, with four major themed content drops to tell the story in pieces with dungeons, new gameplay mechanics and a major chapter update. This year we have the Gates of Oblivion year-long story and the next major chapter update is Blackwood which releases June 1, 2021 on PC/Mac and June 8 for Xbox/PlayStation. I was fortunate enough to be invited to a media preview and Q&A with ESO’s Creative Director, Rich Lambert, and get hands-on with Blackwood.

Set 800 years before The Elder Scrolls IV: Oblivion, Blackwood takes players to a zone between the Argonian homeland and the Imperial province of Cyrodiil. The region of Blackwood is beset by Daedric influence, and its people struggle to survive would-be tyrants and Oblivion-spawned evils alike. The zone includes the Imperial City of Leyawiin from Oblivion, the Niben Forest, the Blackwood Bog and more iconic locations, as well as many new ones to explore. This zone is yet another beautifully crafted area that amazed me at every new landmark I came across, and to see Leyawiin, a city I haven’t seen since playing Oblivion on the Xbox 360 in 2006/07. I didn’t want to spoil the story and lands to much for myself so I only spent a few hours progressing some of the delves and quests on the western side of the map.

With the last few ESO chapters, there has been new tutorials built to introduce newcomers to ESO and also give veteran players a chance to start fresh, playing right into the newest content lands and story. This time however, the tutorial has been revamped with Blackwood and once you get to the end of it at Keywright’s Gallery, you are given the choice of which content you want to start your new ESO journey into. The Blackwood portal is naturally the closest, but you can choose to go through any portal to any previous lands from the last 7-years of ESO content. It’s a great opportunity for players who have been out of the game for a while, to catch up on previous content of their choosing and at their own pace.

Once in Blackwood, I started doing quests and upon completion of one, I received 7 seals of endeavor. Under the group and activity finder menu ‘P’, there is a new option called Endeavors. These are optional daily and weekly quests to give players additional things to do when they log back into ESO. The daily endeavors are activities that you do not really have to go too far out of your way to complete, such as kill 4 skeletons or harvest 8 blacksmithing nodes. Obviously, the crafting or pickpocket ones may not suit your character/playstyle, but they are there if you want to collect more seals of endeavor.

The weekly endeavors are a little more demanding and thus provide 17 seals of endeavor as opposed to just 7 for each daily task. With the new Seals currency, you can acquire any of the currently available Crown Crate items. This includes any of the crate’s potions, XP scrolls, pets, cosmetics, or rare mounts. This will be the first time in ESO where you can acquire these crate items via gameplay in addition to finding them within crates. You can read more about the endeavor system here which is coming in update 30 in June.

Next comes the addition of companions, the Imperial male Bastian Hallix and Dark Elf female Mirri Elendis, which is this year’s big new feature. Last year we had the antiquities system and previously we have had a new class or new skill line. While a new class would have been amazing, the next best thing would be to have customisable companions. I have seen companions implemented very well in games like Guild Wars and Star Wars: The Old Republic, and I was very excited when I heard they were coming to The Elder Scrolls Online: Blackwood.

Companions in ESO can be used to enhance solo content and be useful in group scenarios. As examples, two players and their two companions are said to be able to take on 4-player dungeons, and six players with six companions are said to be able to take on 12-player trials. Alternatively, if you have a certain number of players, say eight for a trial, then there is space for four players to bring their companions to make up the numbers. I am unsure how this will work with the current dungeon finder or whether you will need to physically run to the dungeon entrances, as is the case with trials at present. We were also informed that it would not be likely that companions could contribute enough to take on the game’s hardest dungeons and trials and expect perfect no-death runs.

The only limitations to their use are that you cannot use them in PvP content nor in solo PvE areas like the Maelstrom Arena. There are only two companions at launch and you can raise or lower your rapport with them which will affect how they converse with you. Bastian and Mirri can be obtained by finding them in the Blackwood zone and once you have finished the starter quests (about 30 minutes each), you unlock them in the collections interface, under new heading ‘Allies’, and can then summon them anywhere in Tamriel. Once you have unlocked a companion on one character, it unlocks them on all characters in your account.

Having the two unlocked means you could spec one as tank/dps and the other dps/heals, or any combination you like. When you talk to them, you will get their next quest and there are two other talking options: talk to them about your relationship, and to enter the companion menu. I couldn’t see any other way to get into the companion customisation menu which became cumbersome really quickly, so hopefully there will be a shortcut key implemented. When you talk to them about your relationship, you can discuss how they feel about you and you can ask them about themselves. Bastion tells me he is handy with a destruction staff and good with sword and board, while Mirri loves lorebooks and is handy with a bow.

The companion menu shows an overview of the companion’s combat level, outfit, skills, perks and rapport status. If you have played Star Wars: The Old Republic, this information will be familiar to you, and assigning skills is comparable to Guild Wars. The companion skills are like your main character’s, with class, weapon, armour, guild and racial skills to specialise in, only there are fewer variations to choose from. Under the companion’s class skills, however, are damage, heal and tank specialisation skills. These particular skills are unique to each companion. The number of skills you can slot on a companion start off at 1 and increase as you level them up, though in our preview we had all five skills and the ultimate skill slot unlocked to try different skill combinations. The order in which you slot the skills is the order they will use them. So if you want them to use a buff skill before attacking, put that in skill slot 1. You can choose whichever skill combinations you like, whether you want them to be a full healer or be your tank while you support them.

They can also wear the same outfits and mounts that you’ve unlocked on your account, so you really can customise them how you like and create a pretty damn good looking dynamic duo. When you press ‘H’ to summon your mount and they’ll mount up also, which can be any mount you’ve unlocked. The biggest attraction for me with companions is when I play ESO with my wife. At present, the two of us will queue up the dungeon finder and be reliant on two other players to complete a dungeon. For normal mode it’s fine but in veteran mode, we’ve met many frustrating players for different reasons that’s been enough to end our nights. Now, it will be possible for my wife and I to run 4-person dungeons with the two of us and a companion each and could also look at taking on some world bosses/world events with less reliance on as many other players. I am not sure how viable that will be in veteran dungeons, especially ones with special interaction mechanics, but time will tell.

The other major content addition to The Elder Scrolls Online: Blackwood is new world events in the form of Oblivion Gates. These are not waypointed on the map and are found randomly in the world. I unfortunately didn’t see any spawn in my time playing this Blackwood preview but am keen to see them in action. Essentially they spawn in the world with a number of enemies guarding a portal. Once they’ve been defeated, you can click on the portal and travel to the Deadlands. Deadlands is a dungeon akin to completing a public dungeon making it a little harder than usual. There’s new loot to earn there and then you’ll teleport back to your entry point once completed. I was looking hard for these as I love all of the various types of world events in the other content zones, but am happy to wait until full release to see them in action. They sound exciting!

Overall I am very pleased and excited with what I got to see in The Elder Scrolls Online: Blackwood preview event. I purposely skipped a lot of quest dialogue as I don’t want to spoil it too much for when I run through it all with my wife at release. The general vibe I got from it was dark and exciting, especially going through the companion starter quests and getting to know a little of their backstories. The companions are going to be really cool to level up and customise and I am looking forward to being able to take on more dungeon and world events content with my wife.

For all the latest updates as we head towards release, be sure to bookmark the official ESO website. The Elder Scrolls Online: Blackwood releases June 1, 2021 on PC/Mac and June 8 for Xbox/PlayStation. 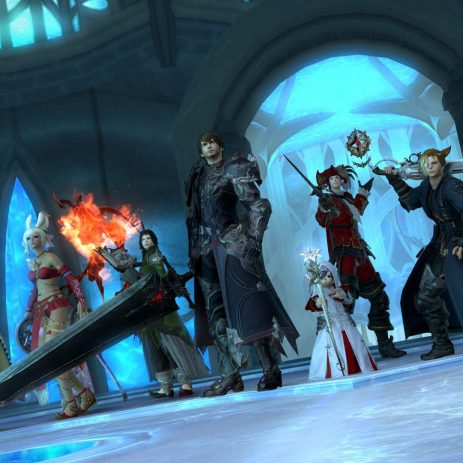