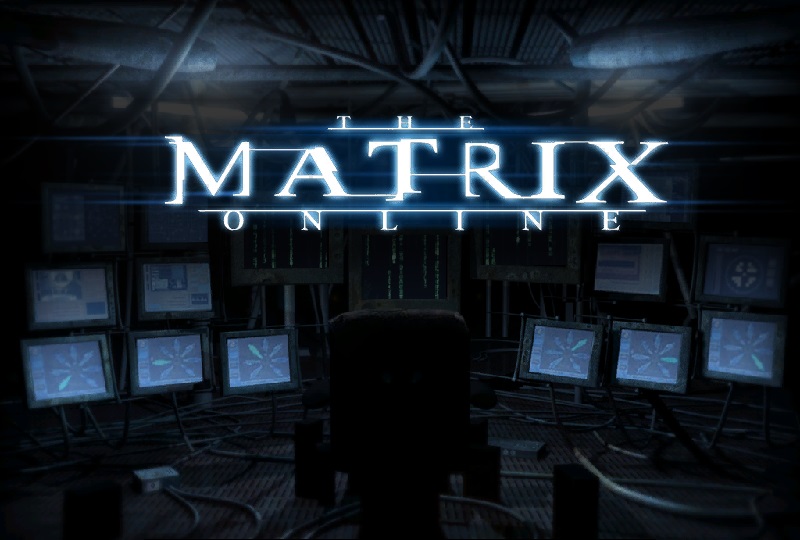 My favourite genre of games, and where some of my fondest gaming memories come from, is Massively Multiplayer Online Role-Playing Games (MMORPGs). I am going to take you down my memory lane as I explore my origins playing MMORPGs from the late 90’s through to today in a multi-part series. I’ve mucked around the chronological order a bit lately as I’ve come across emulators for these older games including a minimalistic one for The Matrix Online, which thus forms part 13 of this series.

When the movie The Matrix by the Wachowski Brothers hit cinemas in 1999, I didn’t really have any expectations going into it but what my mates and I watched was freakin’ amazing! We did however walk out of the cinema going, what the hell just happened?? We had to go and watch it again to understand just how deep the rabbit hole went. 2003’s follow-up releases of both The Matrix Reloaded and The Matrix Revolutions were good but not as good as the original.

In terms of video games connected with the series, Enter the Matrix was released in May 2003 to coincide with the release of The Matrix Reloaded and featured some live action scenes from the making of Reloaded and Revolutions. In 2004, a 10-disc Ultimate Matrix Collection was released which included all three movies on DVD with extras, The Animatrix, some live-action footage used for Enter the Matrix, and some promotional material for a new MMORPG, The Matrix Online.

The Matrix Online, shortened to MxO, is an MMORPG set in the Matrix universe that continued the story beyond the events of Matrix Revolutions. The game was originally slated for release in 2004 and was being developed by Monolith Productions and co-published by Ubisoft and Warner Bros. Interactive Entertainment. As reported at the time by Gamespot, Ubisoft pulled out of the co-publishing deal having doubts about the game based on the lackluster reception of the latter two Matrix movies and an overcrowded MMORPG market. We certainly did have a lot of choice at this point in time with at least ten other AAA MMORPG’s on the western market already, though I couldn’t get enough of them at the time! Closed beta testing for MxO starting in June 2004 and I was invited to the beta in February 2005. Sony Online Entertainment took over the development of the game in August 2005.

When starting a new character, players are given a choice of either taking a red pill or a blue pill, just like in the movies. The blue pill just quits the game, so by clicking the red pill you create a new character in the game that’s appropriately called a redpill. Character creation was relatively involved allowing you to alter the size, shape and look of your character’s RSI (Residual Self Image) which is projected inside the Matrix. Whilst physical traits can’t be changed after initial selection, you can change your clothing style multiple times throughout the game. You can choose multiple options of style for hats, eyewear, coats, shirts, gloves, pants, legs and footwear. For the one and only character I made in the beta I went with a beanie, some cool sunglasses, a purple trenchcoat and gold slackpants.

Once you’ve created your character, you are then ‘jacked in’ the game and you are faced with a familiar scene from the Matrix with everything represented in a series of numbers in a shade of green. After a few seconds the green slowly fades and colour materialises as you find yourself inside the Matrix in a place called the Mega City. Players run through a tutorial scenario to learn the basics of movement, interacting with npcs, obtaining missions and combat. Running around is standard for current MMO’s but jumping involved some forward tumbles and backflips and it was starting to feel like you were in the movies. However, the coolest things were yet to be discovered. You can repeat the tutorial if you didn’t get the hang of combat by ‘jacking out’ into the Loading Area. The loading area is where you can change the appearance of your redpill. You could go through the clothing options again and wear something different everytime you jacked into the Matrix. Here you can also manage your inventory, load new code/programs for your redpill that you found in the Matrix and enter Hardlines. As you discover hardline locations in new zones within the Matrix, these allow you to fast travel to areas by clicking them in the loading area. You can also buy and sell your looted items/programs in the Virtual Marketplace. Currency was not gold/silver, instead currency was called ‘Personal Information’. Once back into the Matrix, you will need to find and complete missions to earn XP and items. Missions are central to The Matrix Online as they are the first point of contact for the Zion, Machine, and Merovingian Organisations, and aree the best for a redpill to engage with the overarching storyline. You start the game with only Zion missions available. Later, other organisations start to take notice of your actions and approach you with missions. Completing missions for one organisation may have a negative effect on another organisation’s reputation and eventually you will be at war with another organisation.

The player opens the missions screen and can choose a controller to gain a mission. Once you click on the controller a waypoint will show on your screen showing their direction and distance. As you travel around the Mega City, you will pass many buildings with doors, elevators and phone booths. In other MMORPG’s and games in this era, these would normally just be art assets. However, in the Matrix Online almost every door/elevator was able to be opened and you could explore the interior of each building. As you explore these buildings trying to locate your mission controllers, you will run through bars and shops that have npcs that play music as DJs, dancers on a dance floor, shopkeepers and more. I saw a random NPC dancing, so I had to join in. As this guy had his shirt off, I thought I’d take both my shirt and pants off, cos why not, it was hot in here! There were many examples of these type of NPC interactions in the world, but it was interacting with npcs and other players where the action was.

As you run around, you’ll come across dangerous exile gangs, redpills working for other organisations and various enemies. One of the coolest parts of the Matrix movies were the various combat styles used while jacked in. The Matrix Online does well to reproduce these battles with a technology unique to other MMO’s called the Interlock Combat System. There’s nothing quite like going close quarters hand-to-hand (or gun-to-gun) versus an opponent in the kung-fu style which made it feel like you were playing in the Matrix movies.

Once in combat you are given the option to use either a standard combat skill or a special move. Special attacks are linked with specific Ability Codes that you can find in loot and unlock as mission rewards. You can only change your combat ability codes when you’re jacked out in the launching area. Like in the movies when Neo had to learn kung-fu, they loaded a program and within seconds he knew how to fight. The same happens in this game and it means you can alter your fighting style from one fight to the next, which made each character very versatile. It also meant that you never knew what kind of skills you would face against any opponent and so it made each fight exciting and risky. Whilst kung-fu fighting is cool, shooting guns and utilising slow-motion bullet-time was bloody good fun too.

As in any MMO, a redpill’s goal is to increase their xp by defeating enemies or completing missions, but you can also gain valuable xp by finding Access Nodes, successfully performing crafting actions, tapping Data Nodes, and a multitude of other activities unique to The Matrix Online. Once a redpill has gained enough experience, they will gain a capacity for greater Health, Inner Strength, Memory Capacity and additional Attribute Points to distribute. There were three main skill areas that you could choose abilities from – Coder, Hacker and Operative. Coders create a special “simulacrum” that fights for them. Hackers manipulate the code of the Matrix to damage or debuff enemies or to heal or buff allies. Operatives were the most common soldiers seen in the movies – Martial Artists, Gunmen, and the new Spy class which revolved around stealth fighting and knife throwing. Guns had unlimited ammo and you never ran out of knives to throw which was great for continuity. Whilst running around the Mega City you would come across restricted areas. These are areas you haven’t accessed nodes yet and there was a heightened risk that you would attract Agents to your position. These were difficult boss-like NPCs that were tough to take down if you were outnumbered. The video below is from Youtuber GammingGirl.

By far the best aspect of Matrix Online was the storytelling which was directed by the Wachowski Brothers. Further to this though was the presence of the actual actors/actresses that played the characters in the movies. People such as Lawrence Fishburne (Morpheus), Mary Alice (The Oracle), Gina Torres (Niobe) and Collin Chou (Seraph) plus many others all voiced the characters they portrayed in the movies and now in the game. This really connected you with the story missions and even more so because these story actions were live events run by the developers. The story told over these episodic releases extended what happened after Matrix Revolutions.

The story progressed in real time, with a chedule that included the following:

You can read back on each of the story releases via the game’s wiki page.

Unfortunately, sometimes good things come to an end and Sony Online Entertainment announced in June 2009 that the Matrix Online servers would be closing on the first of August that year. The days leading up to the closing, as well as the end of the servers themselves, were chronicled on the gaming website Giant Bomb in a video series titled “Not Like This” which was a reference to character Switch’s line in The Matrix movie. One of the Game on AUS community members, Alain Watson, didn’t know about the game shutting down. He bought the game and was excited to play. He installed the game and spent time patching it to the latest version but the next day he went to login and the game had shut down! Man, that would have been brutal! Thankfully he tells me he was able to take the game back for a full refund, legend.

You can watch the final moments of the live servers in the video below as everyone received a message in-game simply saying, “Wake Up”, and then everyone was jacked out of the Matrix for good.

I couldn’t write an article about the Matrix without mentioning a 2001 spoof film called Computer Boy. My gaming mates found this hilarious back then and still find it hilarious today. Here’s one of the better clips from the film and the full version can be found here. Language warning.

If you have memories of playing Matrix Online, I’d love to hear about them! Join the Game on AUS – God Mode closed Facebook group where you’ll be welcomed, and we can reminisce the old days.