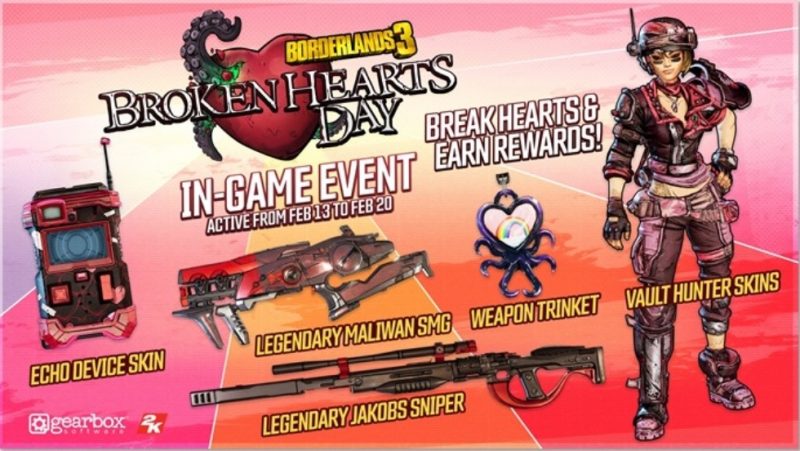 We hope you’re feeling the love, Vault Hunter, because we sure are! Gearbox and 2K shared a Community Love Letter earlier today, thanking fans for their continued support and revealing an update roadmap that includes a new seasonal event, a level cap increase, and a significant number of quality-of-life enhancements coming soon to Borderlands 3. This letter was also discussed on today’s episode of The Borderlands Show, which featured insider insights from Borderlands 3 Live Lead Graeme Timmins.

The new seasonal event – which is free for all players – is the perfect antidote for any Valentine’s woes: Broken Hearts Day! Particularly lovesick enemies across the Borderlands will soon have special hearts floating around them. These hearts take a variety of forms, and shooting them produces any of a number of unique effects, from buffing your party’s damage output to temporarily converting an enemy to an ally to simply exploding into a pile of loot. The more hearts you break, the more rewards you unlock, with five total rewards up for grabs – including special skins and Legendary weapons unique to this event.

Broken Hearts Day can be toggled off and on in the game’s main menu, allowing players to opt out of (or back into) the event at any time. The event will go live on Xbox One, PlayStation 4, Stadia, and PC once the February patch deploys later this month. You’ll then have exactly one week to break some hearts before this seasonal event ends. For more details, check out this helpful Broken Hearts Day blog, and for Broken Hearts Day assets, just click right here. 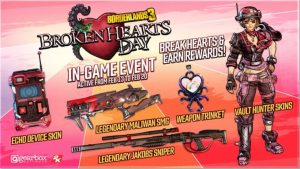 In addition to this new event, Gearbox also announced Borderlands 3’s first level cap increase! Timed with the debut of Broken Hearts Day, the maximum Vault Hunter level will increase from 50 to 53. This will give you three additional skill points to add to your skill trees, allowing you to enhance your existing builds or even experiment with additional abilities. We’ll have more information about future level cap increases later, and intend to make any level cap increases free additions to the game.

And that’s not all Gearbox and 2K announced today. The Community Love Letter also included new details on each of these upcoming enhancements:

It’s a massive, comprehensive look at the free updates planned for Borderlands 3 in the next few months, so for all the details, be sure to read the letter in its entirety right here. And for a look at the second paid campaign expansion, catch the Gearbox Panel at PAX East on Thursday, February 27 at 11:30 am PT / 2:30pm ET (Friday, February 28 at 6:30 am AEDT). You’ll get your first look at the next add-on, as well as a future content roadmap for Borderlands 3. The panel will be streaming live on the Borderlands Twitch channel.

Today’s Community Love Letter also served as the foundation for today’s episode of The Borderlands Show, which featured analysis from our regular hosts Greg Miller and Fran Mirabella, as well as expert commentary from Stream Team member and host of The Bordercast, Mitsu. Our hosts were joined by longtime Gearbox developer and Borderlands 3 Live Lead Graeme Timmins, who provided additional context around today’s update roadmap. To catch the full episode, just click right here.