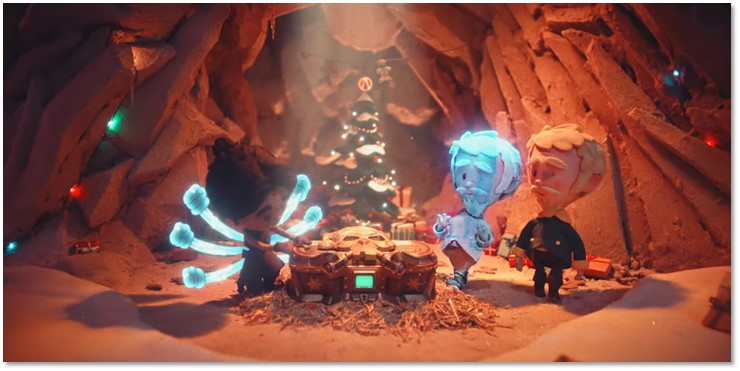 ‘TIS the season to cause mayhem! Christmas has come early this year, or at least in Pandora. Borderlands 3 is coming down the chimney with a sack full of awesome swag for both good and naughty vault hunters. But to get into the Christmas spirit, Borderlands 3 has a new stop-motion Christmas trailer that was revealed in Episode 4 of The Borderlands Show. Set to the classic Christmas carol, Silent Night, the new trailer stars all four of the new vault hunters and also spices it up with cheeky new lyrics.

Along with the reveal of my new favourite Christmas carol was the announcement of awesome Borderlands 3 discounts. From today through until January 7 there will be discounts of up to 35% off across Playstation 4, Xbox One and Epic Store. Discount dates and their respective platforms can be found below!

There’s plenty more goodies to come though. This weeks episode of The Borderlands Show marks the beginning of the Give The Gift Of Mayhem event. This event runs for a week and offers FREE in-game rewards. A SHiFT Code was also shared during the episode which includes free festive skins for all four vault hunters which can be redeemed up until 5:59pm AEST January 11, 2020. For more info on the event click here.

The BIGGEST gift of them all, which does come at a price, is the launch of the first DLC for Borderlands 3. Moxxi’s Heist of The Handsome Jackpot is now available for download across all platforms. Help Moxxi take back what’s truly hers from her now dead infamous ex. Set on a derelict space station, which is also one giant casino, you go up against killer bots and dangerous factions to take back the casino Moxxi designed many years ago that Handsome Jack took from her.

Owners of the Super Deluxe Edition or the season pass will already have access to the first of four paid DLC campaigns. You also have the option of buying the DLC seperately. To access Moxxi’s Heist of The Handsome Jackpot you’ll already need to have reached Sanctuary 3 in-game.

Oh, and one more gift, content drops are coming to Twitch which are available for free with your Twitch Prime membership. The Caster Blaster weapon trinket and 3 golden keys are already up for grabs! To learn more click here.