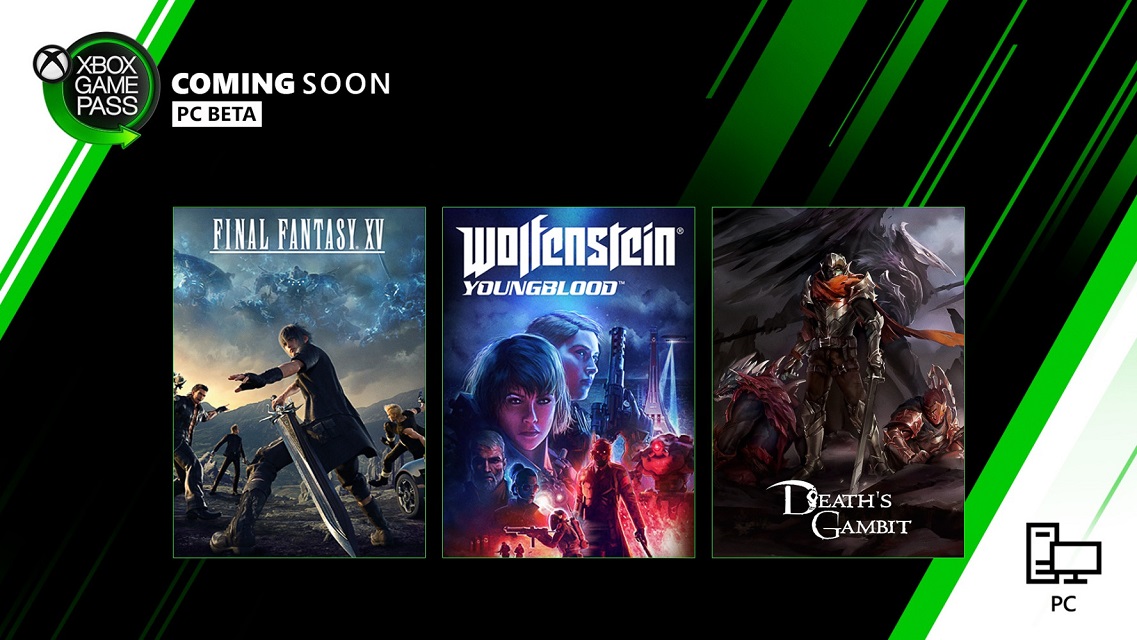 February is here already, can you believe it? Time flies when you’re having fun, and how else better to have fun than with new titles being added to Xbox Game Pass on a regular basis. This month we have some awesome additions in the form of Final Fantasy XV and Wolfenstein: Young Blood, which are coming to both consoles and PC catalogues. In addition, consoles will be getting Death Squared and PC’s will get Death’s Gambit.

Final Fantasy XV (February 6)
The Final Fantasy series is making its way to Xbox Game Pass for PC starting on February 6 with Final Fantasy XV! The highly anticipated next instalment in the legendary series that defined storytelling and adventure in video games. Featuring action heavy combat, innovative gameplay, and immersive graphics that push the limits of modern hardware. Final Fantasy XV is an awe-inspiring tale that transports audiences into its vivid imagining of a fantasy world based in reality.

Wolfenstein: Youngblood (February 6)
19 years after the events of Wolfenstein II, BJ Blazkowicz has disappeared after a mission into Nazi-occupied Paris. Now, after years of training from their battle-hardened father, BJ’s twin daughters, Jess and Soph Blazkowicz, are forced into action. Team up with a friend or play alone to level up, explore, and complete missions to unlock new abilities, weapons, and more to complement your playstyle and customize your appearance in the most open-ended Wolfenstein experience to date.

Death’s Gambit (PC – February 13)
The promise of immortality lies at the heart of Siradon in this challenging 2D action platformer with deep RPG elements. As Death’s right hand, challenge the undying guardians of the realm and endure the eternal struggle to purge their souls. But what reward awaits a faithful servant of Death?

Death Squared (Console – February 13)
Prove your teamwork skills in Death Squared as you solve puzzles together or die trying. Guide robots to color-coded goals while avoiding deadly traps and hazards. Players will need close observation and communication to keep each other alive and discover a solution together in this co-op puzzle game for one, two, or four players – best enjoyed with your friends and family with – featuring both a single-player, co-op campaign, and party mode.

February 11 has some killer DLC coming at you. Reminder that you can use your Xbox Game Pass membership to get up to 10% off DLC and add-ons!

For PC Xbox Game Pass players, there’s also an opportunity to play in the Bleeding Edge beta coming up February 14-16. What more romantic way could you spend your holiday than by gathering a team of loved ones to make a 4v4 team and tear it up in an electrifying online brawler where every fighter comes mechanically enhanced for mayhem?

Leaving Xbox Game Pass Soon
The following titles will be leaving the catalogue soon, so don’t forget that if you want to keep playing, you can use your member discount to save up to 20% off to purchase these titles: