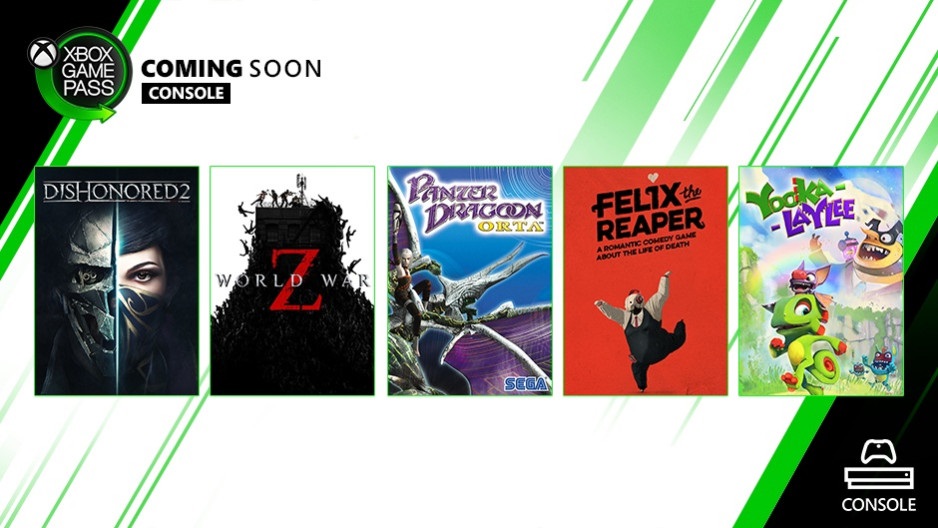 As the weather here in Australia starts to warm up as we get closer to Summer, the Xbox Game Pass catalogue just keeps getting hotter! Xbox recently announced the addition of six new titles and that only covers half the month! Check out the list below and start thinking about which game you’re going to play first. I know I’ll definitely be getting into Dishonoured 2 finally. Dates listed are US release dates.

Dishonored 2 (October 3)
Reprise your role as a supernatural assassin in Dishonored 2, the follow-up to Arkane Studio’s award-winning, first-person action blockbuster, Dishonored. Play the game your way in a world where mysticism and industry collide. Combine your character’s unique set of powers, weapons, and gadgets leaving the choice in your hands on how to eliminate your enemies and survive in this game’s dangerous world.

World War Z (October 10)
A heart-pounding, co-op third-person shooter for up to four players featuring swarms of zombies as you fight for survival amid an undead apocalypse. As the end looms, a hardened few bands together to defeat the horde and outlive the undead. You can also fight other players for survival across several intense player vs player vs zombies modes to complement the co-op campaign.

Yooka Laylee (October 10)
From open-world platformer veterans Playtonic, explore huge, beautiful worlds, meet (and beat) an unforgettable cast of characters, and horde a vault-load of shiny collectibles as buddy-duo Yooka (the green one) and Laylee (the wisecracking bat with the big nose) embark on an epic adventure to thwart corporate creep Capital B and his devious scheme to absorb all the world’s books… and convert them into pure profit.

Fallout: New Vegas (October 17)
Welcome to New Vegas. It’s the kind of town where you dig your own grave prior to being shot in the head and left for dead…and that’s before things really get ugly. It’s a town of dreamers and desperados being torn apart by warring factions vying for complete control of this desert oasis. It’s a place where the right kind of person with the right kind of weaponry can really make a name for themselves… and make more than an enemy or two along the way.

Felix the Reaper (October 17 – Day 1 release!)
From Daedalic comes the quirky Felix the Reaper, a 3D shadow manipulation puzzle adventure game of dance, dying people, and dangerous love. Felix dances his way through this game with ease and moves that make you consider joining in. But don’t let his moves fool you; he’s still a killer.

Panzer Dragoon Orta (October 17)
As the young girl Orta, ride upon the back of a fearsome dragon as you fight to save the world from destruction. Fly over spectacularly hostile terrain, engage in high speed aerial combat, and attack imperial strongholds with multiple weapons and various dragon forms in this classic Xbox title.

We mentioned Fallout: New Vegas, so it’s only appropriate that we get the hype train rolling as the next title from Obsidian Entertainment, The Outer Worlds, will release on Xbox Game Pass for Console and PC on October 25! I can’t wait to get stuck into this one.

There are a crazy number of amazing games in the Xbox Game Pass catalogue, however did you know that some of them were developed by none other than the best ANZ legends going around? Next time you’re browsing the game list wondering which title to play next, consider supporting local talent and selecting one of these legendary games.

Ashen developed by A44
Explore the darkness together in this third person action game where you must forge meaningful relationships to grow your settlement and survive in the remnants of humanity.

Void Bastards developed by Blu Manchu
Created in Canberra and inspired by BioShock and System Shock 2, Void Bastards is a revolutionary new strategy-shooter that will test your wits as well as exercise your aim.

The Gardens Between developed by The Voxel Agents
Fall into a series of vibrant, dreamlike island gardens and manipulate time to solve puzzles in this mysterious realm created by one of Australia’s most awarded studios. From Train Conductor to Puzzle Retreat, the stories created by the Melbourne based studio have been enjoyed by over 17 million players from around the world.

The Stillness of the Wind developed by Fellow Traveller
A quiet game of life and loss, this sad but incredibly beautiful Victorian-developed game challenges you to tend to your homestead and animals in a once bustling village, in which you are the only remaining resident.

Ashes Cricket developed by Big Ant Studios
Not impressed with the latest installment to this iconic sporting event? Create your own history in this sporting epic created in Melbourne.