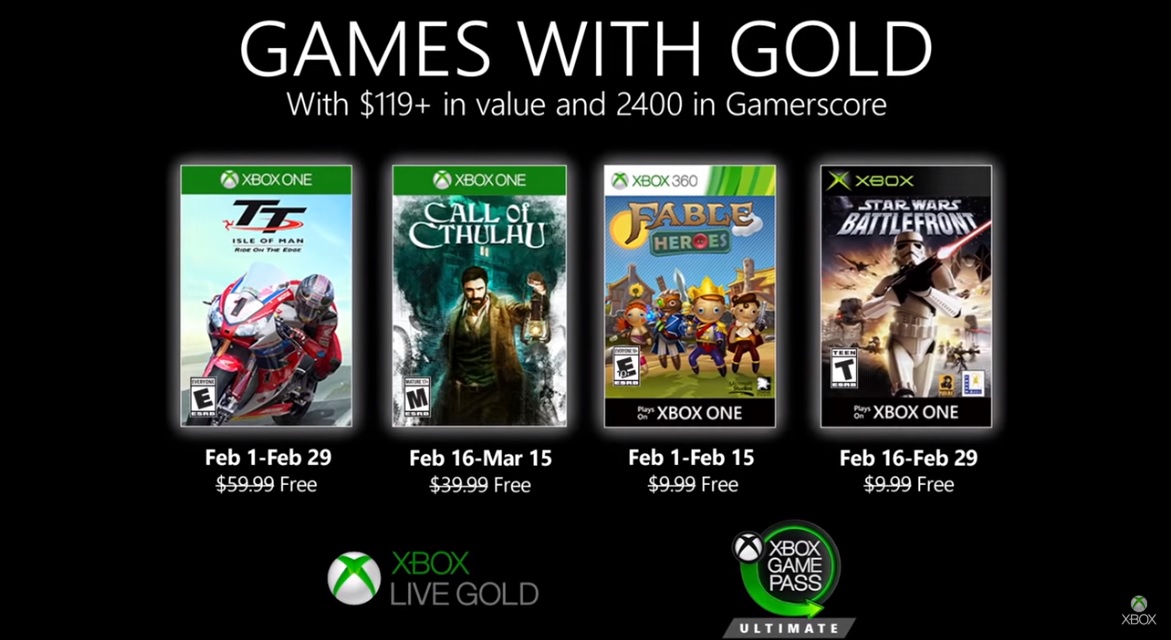 Xbox Live Gold membership gives you $1000 in free games including backward compatible Xbox 360 games for the Xbox One through monthly Xbox Games with Gold. The Xbox Game Pass Ultimate plan give you access to all the benefits of Xbox Live Gold, plus over 100 console and PC games as part of Xbox Game Pass. February’s Games with Gold line-up has been announced and features TT Isle of Man, Call of Cthulhu, Fable Heroes and Star Wars Battlefront, the Xbox original (some might say the best).

TT Isle of Man
Available free from 01 February to 29 February 2020
Originally released on 13/03/2018 developed by Kylotonn Racing Games and published by Bigben Interactive
For bikers, there are two types of speed races: the Isle of Man TT and the rest. No other race is as grueling for the motorbikes and demanding for the riders. Take up the challenge of the Snaefell Mountain course: all 37.73 miles faithfully reproduced with the champions and their bikes. Memorise each section of the course, round each bend to perfection, keep your concentration throughout the 6 laps, get the best time and write your name alongside the greatest champions.

Call of Cthulhu
Available free from 16 February to 15 March 2020
Originally released on 30/10/2018 developed by Cyanide Studio and published by Focus Home Interactive
1924. Private Investigator Pierce is sent to look into the tragic death of the Hawkins family on the isolated Darkwater Island. Soon enough, Pierce is pulled into a terrifying world of conspiracies, cultists, and cosmic horrors. Nothing is as it seems. Sanity is an irregular bedfellow, all too often replaced by whisperings in the dark. Strange creatures, weird science, and sinister cults dominate the Cthulhu Mythos, intent on realizing their mad schemes to bring about the end of everything.

Fable Heroes
Available free from 01 February to 15 February 2020
Originally released on 02/05/2012 developed by Lionhead Studios and published by Microsoft Studios
Fable Heroes is a fresh spin on the beloved Fable franchise in which up to four players play both cooperatively and competitively in this hack-and-slash adventure. Work together as heroes of Albion to defeat familiar foes and new enemies while collecting as many gold coins as possible to unlock upgrades, characters, and items in both this game and Fable: The Journey for Xbox 360.

Star Wars Battlefront
Available free from 16 February to 29 February 2020
Originally released on 20/09/2004 developed by Pandemic Studios and published by LucasArts
Experience an all-time classic with Star Wars Battlefront. Participate in memorable battles from the first six Star Wars films as you fight on the front lines with every weapon and vehicle you see at your disposal. Either by yourself or with an army behind you, the choice is yours to topple the Empire or crush the Rebellion. Note: No online gameplay support.