“Harvest Moon: Light Of Hope’s quests were what helped keep me playing right to the stories end.”

Over the years I’ve become less and less interested in the simulator genre. I become easily bored of tedious tasks that don’t have much of a real purpose. There’s only been one game in the last few years within this genre that’s tickled my fancy. Another farming simulator which had a cute retro aesthetic and fun gameplay mechanics. You can obviously tell which game I’m talking about here. It was inspired by the popular OG farming simulator series Harvest Moon. I’ve known of the Harvest Moon series from my younger years but never had the chance to experience it myself. Since Harvest Moon: Light Of Hope was my first, I only had the inspiration to really compare it with. But even while sharing the same overall gameplay, Light Of Hope brings its own unique feel.

Originally released in 2017, Harvest Moon: Light Of Hope begins with you waking up on Beacon Island without a clue of where you are or how you got there. You learn that the light from its lighthouse has been taken away, changing the island for the worst in the process. Buildings have become dilapidated and residents aren’t their usual chirpy selves. However you do remember that you’re a farmer and with these skills you help bring the island back to life. While also restoring the light that used to shine upon the island. Five stone tablets hold the key to restoring this light with some being easy to obtain while others are a bit more of a challenge. To do all this you do just as the title suggests, harvest. You harvest your little heart out to rebuild houses, businesses, bridges and source materials to progress through the story. However this starts the story off pretty slowly. 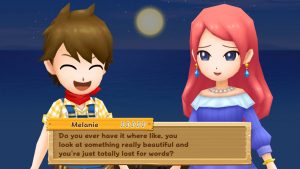 With little to do in regards to objectives I harvested for a few hours a day, became buggered and went straight to bed for the first week or so. But once I got over this hump the story opened up with more to do. I got to know the locals, bought some farm animals and started to source and grow my own materials. I also got a little extra help from completing requests the locals had given me. Having objectives around the story objectives was nice since story tasks were sometimes far between and took time to complete. Speaking of time, you have plenty of it to spare with no time limits set to these requests But when I wasn’t actively harvesting for either of these requests harvesting chores became slightly boring.

There’s only so much fishing, gardening and mining I could do. The latter surprisingly being the one of the more boring of the lot. I’m no fisherman IRL but I had a lot more fun fishing in my favourite little spot. BTW it was up in the north, you’ll find almost every fish you’ll require and early on was an easy way to make money. You’re welcome. Fishing didn’t feel like it had much of a challenge either. All you have to do is bash A. I never failed at catching any fish and there didn’t seem to be an array of options for fishing spots. Mining however was a tedious guessing game of finding the hole that descends to the next level. Over and over again. Apart from finding new mining ores every 20 odd levels there wasn’t much excitement that came from mining. And without a couple of Hoe upgrades this is a slow and painful process. But how does one upgrade their tools? Mining. As something I previously enjoyed in a much similar title, I was disappointed to find this mining experience such a let down. But like I said about fishing there are aspects of harvesting that I, to an extent, came to enjoy. 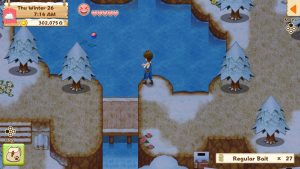 I ended up focusing less on digging and more on the farm and my barns full of animals. It became a large part of my harvesting system. The animals in handy when I needed certain materials for food, building and requests. And all those animal droppings helped my garden grow even better through every season. All that food I grew went straight back into feeding them. Real circle of life stuff right there. Some materials can be bought for a price but it felt more rewarding sourcing the goods myself. At the same time I am guilty of being a bit impatient. But I only bought said materials a hand full of times.

The story itself is just a small part of the game. With around 30 hours of gameplay under my belt I completed it with only 12% of the requests completed. It’s not the most immersive story I’ve come across but personally with this sort of genre the story was needed. After completing the campaign you’re able to continue thriving your harvest and helping out the locals. If you hit it off with one of them they’ll even be able to move in. But I’m not sure how to describe everything post story. It’s kind of like end game content but the story also feels like a large tutorial before you’re left to your own devices. Knowing that I still have a number of requests to do, a part of me wants to reach that 100% goal. At least this has given me a good reason to continue looking after my farm.

Aesthetically I was a bit disappointed in the graphics for Light Of Hope. Especially with the hardware it’s running on. The characters are all 3D models but live in a 2D environment. The last Harvest Moon title we got was for the Nintendo 3DS in 2016 where both characters and environments were in 3D. I’m not entirely sure why they went down this path. At first I thought this was from a different developer but Light Of Hope was also developed by Natsume. Some aspects of the environment are well done like water effects but overall it reminds me of an indie title. Apart from how you lay out your gardens there isn’t much in the way of making your character or farm your own. And don’t start me on what they call a “fence” or “stone wall” in this game. I’ll just leave an image of it here. 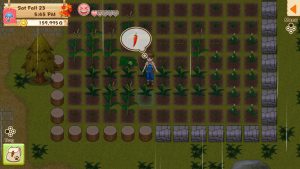 It may not have looked right visually but the controls definitely did. If you’re wanting to pick this up, make sure you get the Nintendo Switch version. Selecting items particularly while harvesting was a lot easier when using the touch screen controls instead of the joycons. Movement can be controlled via touch screen as well but personally I preferred to switch back and forth between joycons and my fingers. The Playstation 4 and Nintendo Switch versions also allows for local co-op where a friend can join in as a “fairy” and help you out around the farm.

Harvest Moon: Light Of Hope may have contained gameplay mechanics that could almost put me to sleep but its campaign and side quests were what kept me playing right to the stories end. And with the many more request from the locals, I’m sure I’ll return to my farm soon.

Harvest Moon: Light Of Hope is available on Nintendo Switch, Playstation 4 and Steam and I give it a 6.75 out of 10.