“Hearthstone Battlegrounds shows a unique approach to auto chess, if you can still label it as such”

“Blizzard needs to make their own auto chess,” is a statement that’s been said for months by not just myself but also friends I play other auto-chess games with. In a genre that’s forever growing in popularity, it’s the perfect universe to base a game around. Blizzard already created a MOBA with Heroes Of The Storm, why not auto chess? During BlizzCon 2019, our wishes had been answered. Well, kind of.

Hearthstone Battlegrounds was, in my opinion, the 2nd best announcement Blizzard made this year. I wasn’t even overly concerned that it was solely based within the Hearthstone world. It was a fresh new auto battler that I couldn’t wait to not only master but ultimately become addicted to. As you can tell I’m quite a fan of auto chess. Earlier in the year I wrote a mass review on the genre and try to fit in a few cheeky matches where I can. I think I’ve sunk more hours into auto chess in the last 6 months than games like Overwatch and Call Of Duty. Both of which have been my go to multiplayer titles for years. So it’s no surprise that Hearthstone Battlegrounds had me very excited. However my expectations seemed very different once I first caught a glimpse of how it played. 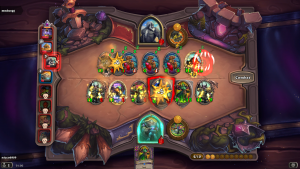 Traditional auto chess games have you choosing certain pieces to go with others that generally match with that class creating a synergy to work together and become more powerful. Then place anywhere on the board and hope for the best as RNGeesus takes the wheel. That is of course until you reach late game and have to think about positioning. For the most part it’s a mostly lazy process that can be done on auto pilot. For me it’s a nice chill game after a long day or on a low energy stream night. Hearthstone Battlegrounds however takes a different approach. Now my impressions at first glance was that it was going to be the lazy mans Hearthstone as everything pretty much looked the same. Placing any old card on the board while the AI makes the rest of the decisions for you didn’t exactly sound fun. I was expecting to be bored after half a dozen matches. However this wasn’t exactly the case.

If you’re not familiar with how Hearthstone or other card games work, it requires a bit more strategy than picking and playing the same class cards. The same applies to Battlegrounds. I learned very early that I can’t mentally switch off completely as I repeatedly had my arse handed to me, during early game no less. After many matches of being placed no higher than 6th I slowly realized that the real synergy of the cards didn’t just have to do with class type. Like a regular game of Hearthstone, I had to read what the cards did before playing them. You can still go class exclusive with your build but it’s building around each and every cards abilities that will take your opponent down. And you have seven of them, so you better bring You’re A-game.

Now at the time of publishing this review, Hearthstone Battlegrounds is still in Open Beta so there’s a chance of changes on the horizon. There’s no Casual Play or Ranked however there is a rating score which lowers or increases depending on what place you come in. Whether this changes or not, time will only tell. At the moment there are only 4 classes to choose from: Demons, Mechs, Murlocs and Beasts. This doesn’t give too much of a variety to play around with and I really hope that there’s a lot more at full release. The lack of gameplay variety is somewhat made up though with Hero selection. Every game gives you a random selection of 3 different heroes. And just like a regular game of Hearthstone, each come with their own abilities/perks. This kind of gives you a new way of playing your cards each time. Some heroes also include class specific perks but the majority can be played with any type. At the moment the Demon class is my go to and I ran them with almost all of these Heroes. In the end I came out with an average of 3rd place. 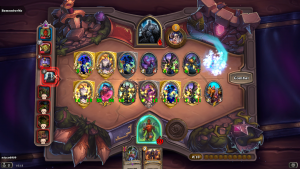 However the hero costs are all over the shop. Some come with a passive ability free of charge while others cost anywhere from 1 to 4 gold. In my opinion it’s a bit of a jump in cost when comparing some of the abilities. One heroes ability of giving a card furthest to the right +10 attack costs 2 gold while another hero gives divine shield for 4. It’s a little petty but I definitely wasn’t clicking on his divine shield ability much during that game.

Speaking of currency, you’ll find yourself currency juggling through most of the match. Unlike other auto battlers, your currency refreshes after every game and slowly builds up to a cap of 10. Again, just like normal Hearthstone. Along with watching what cards you play also be mindful of what you’re spending gold on. With a gold cap, it can be tricky to choose what to prioritize. Between playing/buying cards, refreshing card selections, hero abilities and leveling up I found myself making so many stressful last second decisions. If you already have cards that you no longer need, I suggest dealing with this cap efficiently by always spending as much as possible and then selling. Never the other way around as gold will never go over 10, no matter what. One huge gripe I have however is not being able to sell cards from my hand while having a full board on play. This. Needs. To. Be. Fixed. ASAP. Another gold spending tip I have is waiting for leveling costs to drop a bit before spending. But at the same time level up as fast as you can.

It’s a well known fact you don’t go hard on self leveling in auto chess. However Hearthstone Battlegrounds is the complete opposite. I highly recommend trying to level up every few matches otherwise much more powerful cards are going to steamroll your low levels. This obviously applies to card leveling as well. Luckily you only need to triple up your cards once to make them gold. This most likely has to do with the fact that these games of Hearthstone Battlegrounds are finished up a bit quicker.

Regular Hearthstone games have you start at 100HP while Battlegrounds gives 40. Except for that one Hero that has 60HP, which if you’re good enough player will give you a decent advantage. As they always say, a quick game is a good game. But auto chess is known for their lengthy game times. It can take anywhere between 30-45 minutes to wrap up just one game. Which has stopped me from trying to get in a game of Dota Underlords when I’m on my work break. I like a quick game. And sometimes I don’t have time for long matches. A prime example of this is Battlefield vs. Call Of Duty. Out of the pair, I’m a CoD boy through and through. Not just because I prefer how Call Of Duty plays but because I can be finished in a game within 20 minutes. This can also be said of Dota Underlords vs. Hearthstone Battlegrounds. While games are over and done with quickly, they don’t feel as cut throat or clutch towards the end in comparison. There’s some truly table shattering action no doubt. But none of it had me on the edge of my seat. Being able to see the numbers on my opponents cards either screamed victory or defeat early on.