SO far we’ve seen stunning gameplay and learned how Visual Concepts have rebuilt the way we move around the court in NBA 2K21. In the third and final Courtside Report written by Mike Wang, details about the games improved MyPLAYER and AI are revealed. Wang explains how player feedback helped them make changes by adding and taking features away.

MyPLAYER for example has had a big change when it comes to player presets by taking them pie chart away completely. Instead they give players control of individual stats allowing you to set each stat cap within range according to your vitals.

A plethora of badges have also been added while a lot of others have been benched. Those being retired include: Consistent Finisher, Contact Finisher, Cross-Key Scorer, Fancy Footwork, Fastbreak Finisher, Deep Hooks, Pick & Roller, Relentless Finisher, Showtime, Deep Fades, Flexible Release, Hot Start, Pick & Popper, Pump Fake Maestro, Range Extender, Quick Draw, Steady Shooter, Pass Fake Maestro, Flashy Passer, Lob City Passer, Lightning Reflexes, Moving Truck. Wang says the reason for cutting 20+ badges is because “they were either redundant, didn’t fit in the new design, or the community just didn’t like them”. The list of both new and returning badges can be found below: 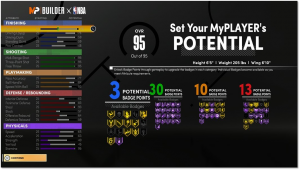 Takeover has also had a lot of additions in regards to its available abilities. The list has grown by three times its amount, however these are more so specified breakdowns of the eight already existing abilities. These new abilities are:

The next generation of Takeover will also work as a multi-tier system. Players will now have three Takeover bars to fill that will have two abilities of their choice, either same or different, while third and final bar activates all team members Takeovers. However missing a shot or turning the ball over will take all Takeover progress away. A special tribute to Kobe Bryant has also been included in the form of a new badge. Earning all your badge points will reward you with the Mamba Mentality badge which lets players change Takeovers whenever you want.

We’ve already seen a high level of realism coming the next generation of NBA 2K21 but Visual Concepts have also tapped into to making the overall game as real as possible. “NBA 2K21 continues to lead the way in accurately modelling its respective sport better than anyone else out there,” Mike Wang says, “That’s something we pride ourselves in and know that the true students of the game appreciate about the franchise.” Many changes to both Defense and Offence AI have been made which can all be found below: