If you’re reading this and you’ve already seen a John Wick Hex review by Game On AUS then there’s no need to be confused. Originally released on Steam and reviewed by my colleague Royce Wilson, John Wick Hex has recently been released on consoles. Since this is a double up on an already reviewed title, I’ll try keeping this short and sweet. (EDIT: this didn’t happen.)

John Wick Hex takes place before the movies so there’s no need stress about not knowing important plot points. But to give you a heads up, Helen is John Wick’s wife. After a criminal mastermind by the name of Hex abducts two members of the New York Continental, master assassin John Wick is sent to the rescue. That also means taking out Hex’s deadly henchmen along the way. 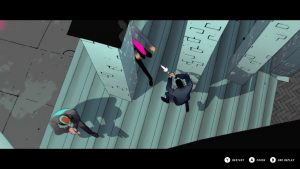 Doing so requires a lot of planning and patience. John Wick Hex is a mixture of puzzle and strategy where Hex is more than just a name. Wick moves through environments using hexagonal-like placed markers, stopping whenever you’ve reached your desired location or spotted by enemies. It sort of reminded me of games like Lara Croft Go and Hitman Go where similar kinds of movement and planning mechanics are used. I found myself getting creative with my kills instead of just shooting enemies when I could. Luring enemies, sneaky melee takedowns and throwing punches/guns both saved bullets and opened up a chance to escape my own death.

However most of your actions will and should be planned using the games Timeline system. This is similar to other turn-based combat games that use time as a means of when players/enemies will make their next turn. Just as it would in real life, every single action in John Wick Hex takes time to fully execute. This means every single decision matters. From moving, healing and even picking up weapons, they all have a fight or flight risk to it. I personally enjoyed how the action always keeps you on your toes. However every decision you make will also affect the remainder of your time in that current location. That’s the kind of stress I was not a fan of.

Survival skills are also a key part in successfully making it to the end of each level. Ammo and health are a scarce supply, more so in regards to the latter. Chances are if your assassination skills are anything like mine, you’ll find yourself fighting your way through to the end of a location with low health. And as it doesn’t refill upon death, it means you’ll have to take what you’ve already learned about your surroundings and apply it to your next attempt. And there will be many attempts if this is the case. However the fight to the end is worth it with the amount of satisfaction it brings, only to do it all over again. 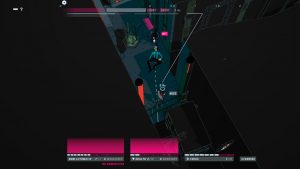 As an added bonus, you can also watch a replay of the level you just completed with all of the stops and starts cut out. It’s the same end-of-level replays concept I saw in Katana ZERO last year, bringing out the fast-paced action also seen in the John Wick films.

John Wick Hex absolutely feels like it belongs on console, particularly the Nintendo Switch. With its similarities to the Lara Croft/Hitman Go games on mobile and short-ish level lengths, it’s the sort of game that’s perfect to play on-the-go. However my experience wasn’t all smooth sailing as there were a few occasions where a game error had occurred. While a little annoying, the errors didn’t greatly affect my time with the game except for one occasion. Errors usually happened at a death screen apart from the one time where I was watching a replay of the level I just finished. Unfortunately I back into the game to discover that it hadn’t saved at the end of the level, pushing me back to its beginning. Because of this, I ended up finishing said level with less bandages than I was meant to. Every decision may matter but this was one that could have been avoided. No such fix has been released either.

Smart, frustrating and satisfying are a few words I’d used to describe John Wick Hex. Technical difficulties aside, I highly recommend this for anyone who enjoys strategic turn-based games with a twist.

John Wick Hex is available on Nintendo Switch, Playstation 4, Xbox One and Steam.