Getting a ball in the hole sounds simple, right? Actually it sounds more like golf. But I assure you this new title by Spanish indie studio Devilish Games has nothing to do with hitting the green. Kolumno is a challenging new puzzle game for the Nintendo Switch that will test both your reflexes and your patience.

Your task in Kolumno is to transport a ball from the top of a column into the hole below. A very simple concept presented in a minimal way. Kolumno presents itself without the need of obnoxious titles or menus. Seamlessly transitioning from the title screen and into the game, it starts by making you feel somewhat zen. Teamed with calming background music, you’re presented with your first challenge. But of course, it’s not going to be as simple as dropping a ball into the hole. Or stay zen for that matter. 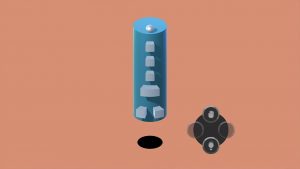 Progressing through the first chunk of the 75 levels in total, you’re introduced to the games core mechanics. Between the top and bottom of each column are various moving obstacles you’ll have to navigate. Sometimes they’re fast, sometimes they’re slow. And sometimes they’re both. But since gravity plays a big part, controlling the ball is a little more complex than changing directions on the fly. The game slowly teaches you the 4 different ways the ball transforms to successfully reach the bottom. Again, this is done in a very simple manner with very little vocalized instruction. The way Kolumno’s “tutorial phase” is executed makes the game continuously flow without making it feel like another dreaded tutorial. And it teaches you in the simplest of manner, making it easy for anyone to pickup.

But as I finished dealing with only one ball transformation at a time, I knew what was going to happen next. As you continue to progress, Kolumno’s puzzles start to rely on a couple of ball transformations at once. It’s around here that the zen feeling from earlier starts to disappear as the puzzles start to rely on planning and precise timing. The ball in its original states takes just under 2 seconds to fall from top to bottom. Trust me, I timed it. That’s a small amount of time to put a plan into practice while making sure you’re hitting the right buttons at the right time. There were dozens of moments where I either dropped or transformed the ball half a second too early or too late. The background music is soft, slow and calm but it was a huge contrast of what I was hearing in my head. Which I will not be repeating in this review.

Did I start to feel overwhelmed? A little. Did I wrongly choose to begin this game at 10PM knowing that my brain wouldn’t cope well? Probably. Kolumno was surprisingly a game I had to put down a couple of times and walk away from. And it’s the same way I deal with boss fights. I’ll fail a boss encounter a dozen times and walk away from it for a day. When I return, I’ve somehow managed to beat the fight in one go. You might end up feeling defeated either from lack of brain power or just pure frustration but taking a break is going to help you get past those more challenging levels. 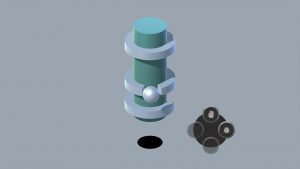 Since the games UI is practically non-existent, there aren’t any constant updates on how many levels you’ve completed. But I was surprised when I checked the level selection with how fast I was closing in on the finish line. But that overwhelming feeling was coming back again. I’d already tackled multiple of the more challenging levels but I knew the real challenge was putting all four of those ball transformations into practice. I was stressed enough as it was dealing with two. However the long stretch home wasn’t as horrible as I was expecting. The last chunk of levels obviously still require a certain level of planning but I somehow didn’t feel as overwhelmed as expected. Maybe it had something to do with my body being in more of an aware state. Or I had just become so used to the games mechanics and became progressively better.

After finishing Kolumno, a part of me wanted more. Whether that’s from future updates or a follow-up title. It’s not the longest of puzzle games but it’s a definitely worth the price point as well as a great workout for your reflexes.

Kolumno is available now on the Nintendo Switch eShop.