The clip is from a movie called Groundhog Day. It was a hit in the 90’s and it still has a cult following to this day. It’s about a self-centered douchebag named Phil (Bill Murray) who is stuck in a purgatory time loop. It’s a quality film that has many different deeper meanings threaded throughout. The movie goes through his ups and downs while stuck in the loop. One dark but funny moment is when he takes a bath with a toaster, only to wake up the next day. While you’re still dealing with the shock and guilt from laughing, the alarm clock starts playing “Put your little hand on mine” beginning his day once more. Playing DayZ is similar because it’s comically dark sometimes. But the big difference is every time you play it’s like taking a bath with the toaster.

DayZ is an open world zombie survival game. It’s created around a fictional post-USSR island called Chernarus. A plague has turned people into aggressive and murderous zombies. Being one of a few survivors left, you will scavenge, loot and kill to stay alive. It’s a dog-eat-dog world. I was initially reluctant to play this style of game wholeheartedly. Looking for new challenges is something we “Gamers” have in common, but what was the cost for this type of game? Would I give up a piece of my humanity? The outcome of the conflict was complicated but predictable. In this game, you become fully immersed in the role of a somewhat soulless being just trying to stay alive. 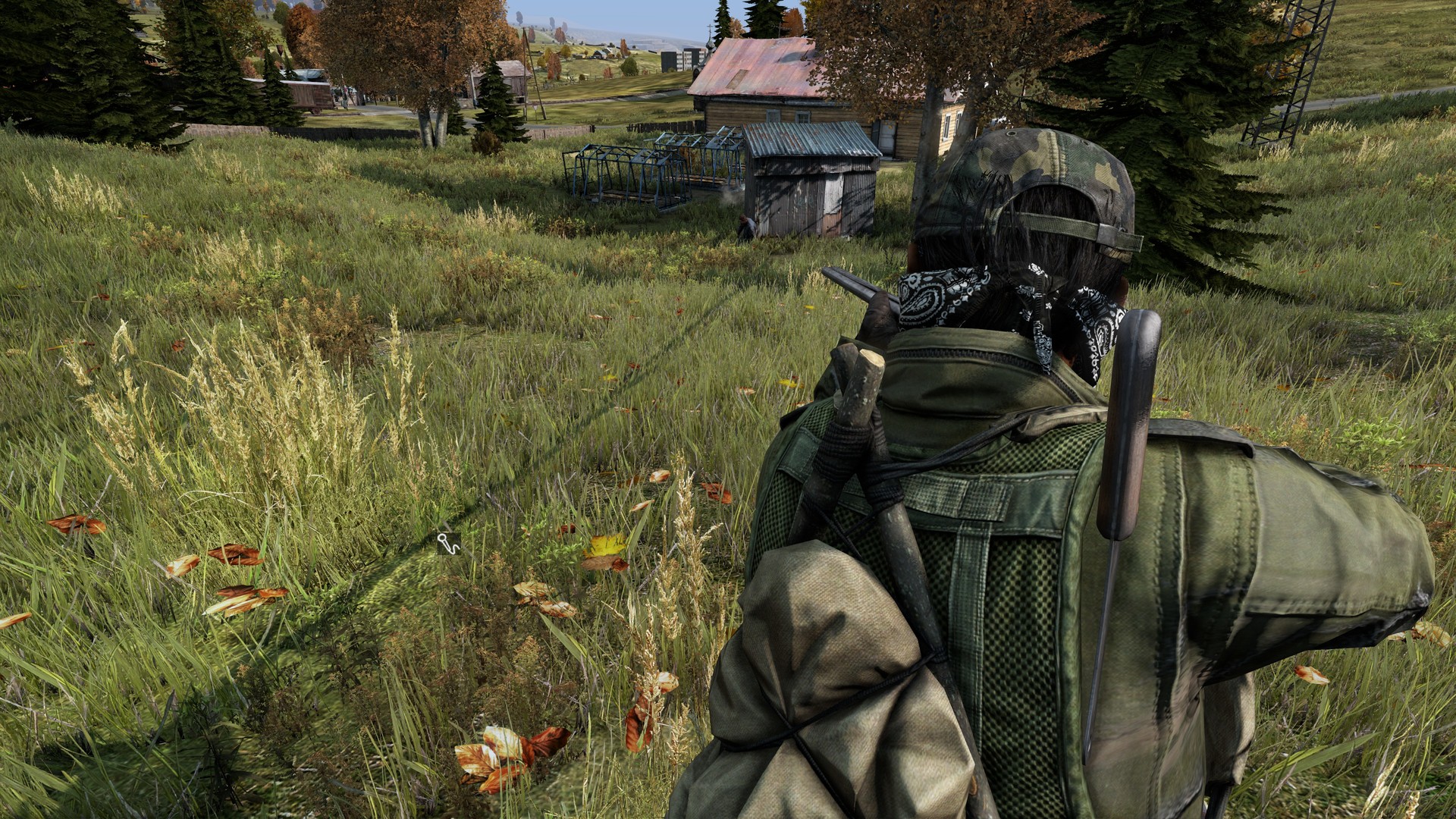 Survival in DayZ isn’t as straightforward as using a Medpack and getting your full health back. There are a number of different ways to die in this game. From being shot, dying of thirst, eating bad food, using the wrong blood type for blood transfusions, starving to death, there’s also the dire prospect of a gang of people catching you, handcuffing you, then storing you in a makeshift jail. They will also create their own all-or-nothing arena, where you need to fight another player to stay alive. All the while they watch. It’s weird!

To stop all of the above from happening you need to scavenge and loot. You don’t have to kill everyone on site, but after you’ve been betrayed a few times your trust in others becomes seriously diminished. I rapidly became a jaded lone wolf in this game.

There are different types of armour and guns to pick up. It ranges from pistols to assault rifles, also helmets, backpacks and body armour. Crafting and vehicles have also been introduced. You’ll find all of these items in different random spots in houses and buildings. It’s a lot easier to find items in larger cities but the risk is that someone will be waiting for a victim like you to drop by. So be careful and plan ahead. The zombies in the game are more of a nuisance than anything. Unless there’s a large pack of them.

You don’t get to choose where you spawn in the map and sometimes it means travelling a fair way to get where you want to go. In this particular game, I spawned in the middle of the island and needed to work my way across to a spot called Riphy. Riphy is located on the North East coast of Chernarus and is home to a beached cargo ship that’s broken in two. It contains useful loot without the dangers of a major city. It didn’t attract a lot of players as it was a little bit of a trek and cars hadn’t been introduced yet, meaning you had to run everywhere! So I scavenged, looted and took out other players for five days on my way to it Riphy. I also had a bit of luck and ended up with the best gear you could get, baring a few small items. 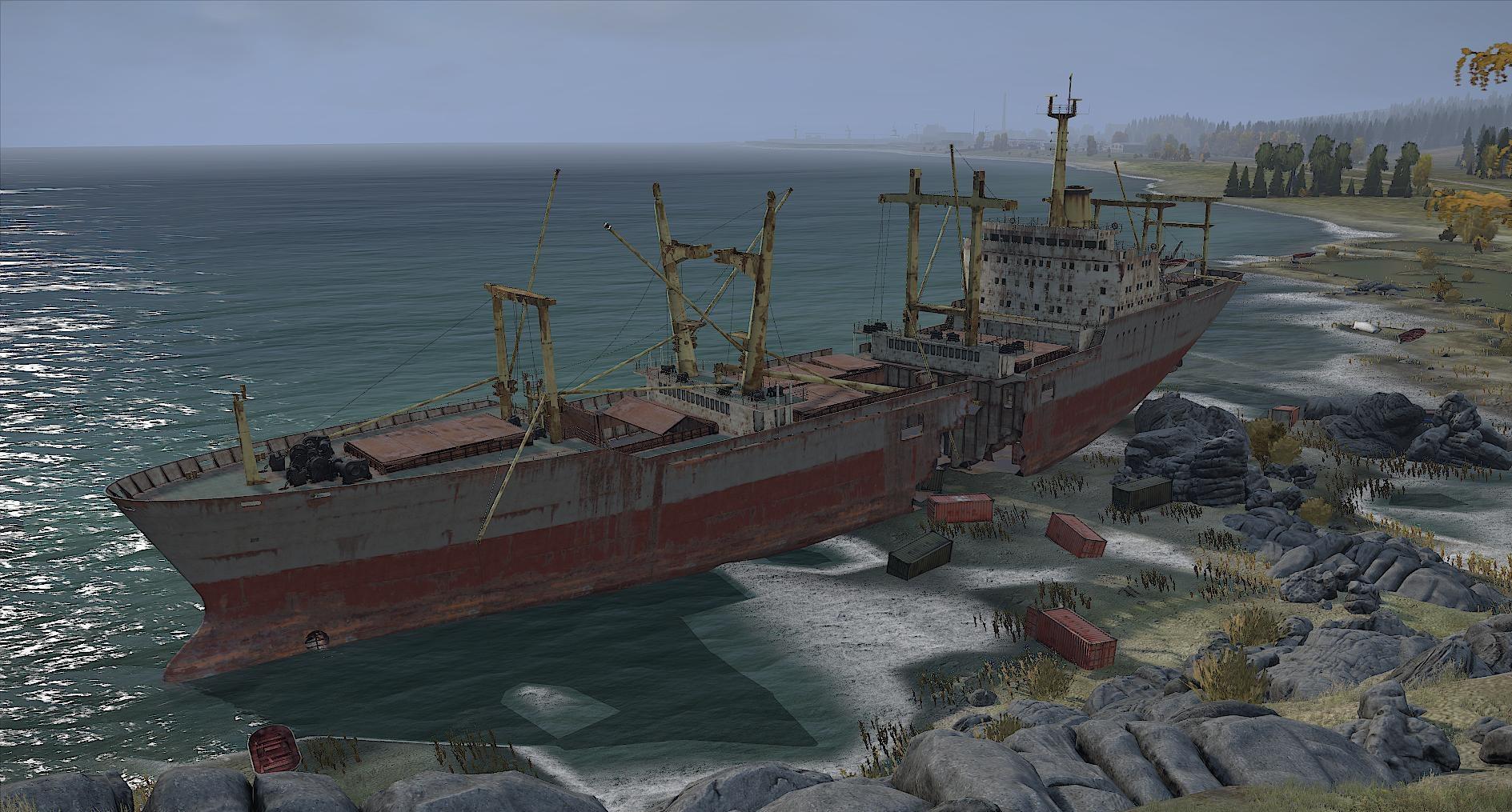 When I arrived I went through the motions of checking the area so I moved around the outskirts while waiting for other enemy players to arrive. It was easier and safer to wait for players to come out of the cargo ship area and then attack than going in yourself because some cheeky players would camp in the ship waiting. Also there were still a fair amount of fatal game bugs. For this reason, I waited on the hill near the cargo ship for someone to venture in. I stopped my stalking because I noticed movement off to my right. I turned to look and two players were slowly making their way to the broken ship. They didn’t stop to check the area and ran straight in to see what they could find. I found a rock and crouched behind it. I needed to wait until they came out. In my spot to my right was a stretch of beach and to my left, the woods with a few hills. After exiting the ship they would head for the hills and trees as they would have more cover and it will be harder to take them out. If they went that way I’d leave them alone and wait for another day. If they headed down the beach, I’d have a chance as there’s no cover along the beach and I’m sitting behind a rock. Also the beach is a more direct route to a main city called Berezino. The beach slopes away from the road so it can give you a little bit of cover, so if someone was on the road they couldn’t see you. My musing was broken as multiple pistol rounds broke the silence: bang bang bang!, then the brrrrat brrrrat of a submachine gun! A deadly silenced followed. After a few minutes the two players come strolling out as the victors. They had found another player in waiting and had taken him out.

They turned towards the beach and started running. I shot at the first players legs, trying to hit around equipment so I could take it later. I took the first one out. He went down quickly so he must have been the “bullet magnet” in the cargo ship I could hear earlier. The other player started zig-zagging to dodge the next round. I knew it would take longer as his health wasn’t as depleted as the last player as well he would have the benefit of knowing where I was shooting from. I forfeited the idea of gathering loot and out of desperation flailed body shots. Luckily, a couple of shots connected but he soon discovered me. With the economy of purpose he raced straight for me. This player was not going out without a fight. He ran around like a crazy man, I tried to hit him but his zig-zag was epic! He got closer, jumped and shot at the same time and hit me. Predictably, he jumped again as it’s a common trick and I got him. All my muscles had bunched up, I took a breath and said to myself “Holy balls, that was close”. My gear probably took a beating as my health wasn’t too bad. I checked my inventory and my vest had been destroyed.

Then I ran over to loot the bodies but disappointingly they didn’t have much and most importantly, they didn’t have vests. I would need one pretty soon as it was obviously what saved me from being the looted body myself. I thought I could check the container ship and see if anything was missed. But I would need to be careful and exit through the woods. Doubling back, I entered the cargo ship slowly.

With trepidation, I tiptoed through and eventually found a vest on the floor above me. I would need to climb a ladder to get it. I start climbing up each rung hoping I wouldn’t die. Eventually, I stepped off onto the second level. I then grabbed the vest and started to climb down the ladder. On the first rung down, the game glitches and the screen jittered. Then I’m dead. I could feel the rage rise up the back of my neck. There was no going down in glory, there was no nail-biting battle with back and forth volleys and hunting. The bad game design killed me. Over and over again, this had happened. I had just had another bath with a toaster. Only this time I left DayZ for good and I’ve never gone back. I had a choice where Phil didn’t.

P.S. Watch this series by Frankie. It’s awesome and shows the good side of DayZ. Also this review is based on it’s initial relase in 2014, the game has come along way since.

P.S.S. I made a mistake, you can’t jump in DayZ :(. My old memory is fading… Just replace it with “He charged it towards me and shot twice” Thanks to Reddit community for pointing this out.