A Sonic superfan who submitted a concept to LEGO Ideas about bringing Sonic The Hedgehog to LEGO has had her dreams come true. 24-year-old Viv Grannell from the UK submitted the design to LEGO Ideas, who allow LEGO fans to submit their our creative designs in hopes of becoming brickform. Taking the Green Hill Zone from 2017’s Sonic Mania as inspiration, Viv’s approved design gained the prerequisite 10,000 votes it takes to become a reality. This also comes at the perfect time as 2021 marks Sonic The Hedgehog’s 30th Anniversary. 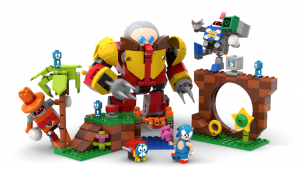 “At SEGA, we’ve always encouraged fans to take part in the legacy of the Sonic franchise through their own creations and it’s wonderful to see the tradition continued through the LEGO Ideas® program,” say’s Jason Rice, Director of Brand Licensing at SEGA® Europe Ltd, about the collaboration. “We’re thrilled to partner with Viv and the LEGO Group, and hope to inspire fans to continue creating their own unique Sonic the Hedgehog™ experiences for generations to come.”

Talking about the winning idea, Viv Grannell said; “I’ve been invested in the world of Sonic for almost my entire life, and it’s such a perfect fit for the LEGO system that I spent about a year rallying support for it to happen. Having 10,000 people back my design was overwhelming enough, even with friends and family behind me, but having it be selected for further development was the most exciting secret I have ever had to keep!”