For those gamers that like physical releases, Limited Run Games will be holding a press conference as part of E3 2019 on Tuesday June 11 at 5am AEST. Limited Run Games was founded by Josh Fairhurst and Douglas Bogart in 2015 and is a publisher of limited run physical games for PlayStation Vita, PlayStation 4 and Nintendo Switch. CEO Josh Fairhurst stated at their first E3 press conference last year,

“LRG publishes small issue print runs, typically in the 2,000 to 10,000 copy range, of previously released digital only titles onto physical media. We do this because one day, all of these digital games will be removed from the servers they currently reside on. These games deserve physical preservation ,and you, the players, deserve permanent ownership.”

It’s a worthy cause considering the likes of the recent Telltale games being removed from digital sales, and therefore almost disappearing from the market. Last year’s show started off a little cringe-worthy but 18 indie titles were announced to be available in limited run physical form. When they say limited run, they mean it as once the games are sold out, that’s it and no others are made. Titles announced last year were Observer (PS4 physical), Salt and Sanctuary (PS4/PS Vita physical), Yooka-Laylee (Nintendo Switch physical), Exile’s End (PS4/PS Vita physical) and Dust: An Elysian Tail (Nintendo Switch physical). Some of the games currently listed on their website have sold out and some only have limited stock left.

Tune into Twitch on Tuesday June 11 at 5am AEST for some “huge reveals, including the entirety of our PSVita lineup!” According to Fairhurst, there’s plenty to be excited for. 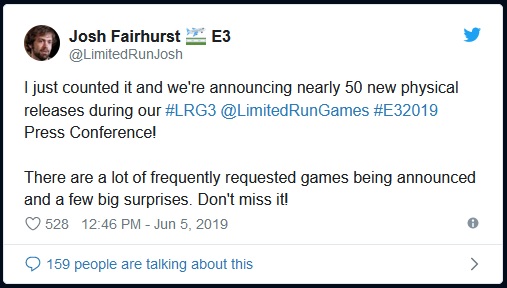