DON’T get me wrong, I do love wired headsets, but there’s just something about wireless headsets that make me gravitate towards them more.

I’m not sure if its the new found freedom of being able to roam the home with my headset still snug on my scone, or the lack of wires making for a more visually pleasing office space, but once I went wireless a few years ago with the RIG 700HX, I’ve found wired headphones far less appealing to use on my PC.

In saying that, my beloved RIG 700HX are in dire need of a replacement, so I thought now would be the best time to complete my Logitech peripheral setup with the Logitech G733 Lightspeed Wireless Headset, a quality headset that prioritises the things that matter when using a headset – namely, comfort and performance.

The G733 is posed in the Logitech catalogue of headsets as a premium wireless headset, with its design comparable to the more affordable wired G335 headset model.

It features an almost identical plastic build with thick cushioned earpads, and also makes use of an elastic headband strap, which is designed to take pressure off the top of your head. It’s also rather lightweight, weighing in at only 278 grams, and connects to your PC or console such as PS4/PS5 and Nintendo Switch (when docked) via a USB dongle.

The Logitech G733 comes in four colours, Black, White, Blue, and Lilac, which thankfully was the colour of the unit I received for this review. Each headband also has a welcome splash of colour on them, and can even be reversed if you find yourself wanting to switch things up, as both sides have a distinct pattern on them.

If RGB lighting is up your alley, you’ll be happy to know that the headset has that as well, with two RGB lighting zones placed on the front of each earcup on the headset. By default it just runs through a cycle of colours, but can be adjusted through the Logitech G Hub software that is available on PC and Mac. If bright lights aren’t for you, simply toggle it off.

As is standard with Logitech peripherals, the Logitech G Hub companion application is a must have if you want to get the most out of the G733. Customising the lighting is nice and all, but also available is the ability to adjust with the acoustics of the headset, toggle on surround sound, and tinker about with the microphone also. There are plenty of options to mess around with the customise both the headsets sound and microphone, however if you just want quick and easy customisation, there are a welcome bunch of preset options that’ll likely do the trick.

You can also assign functionality to the single G-Shift Button present on the headset, which is initially set to mute your microphone, but can be set to do countless different macros or commands. As someone who loves getting up throughout the work day or a gaming session to make a coffee, I loved using the G-Shift button to allow me to Play and Play audio or video content that was running on my PC.

The microphone is removable which is a welcome feature for those keen on using a different mic or those who simply don’t want to talk.

Unlike other Logitech high-end products such as their Superlight mouse and G915 wireless keyboard which charge with the outdated relic that is Micro-USB, the G733 thankfully adopts USB-C connectivity for charging.

If RGB lighting is active, the battery will last for roughly 20 hours, which means you’ll more than likely get a few days use out of the headset before needing to charge it. If RGB lighting isn’t your style and you decide to turn that off, battery life extends to an estimated 29 hours, which is again more than enough for a wireless headset.

The headset as I mentioned strives to be comfortable and usable for long play sessions, and I definitely believe it succeeds in that. The memory foam cushions are welcome pillows for your ears, and the adjustable head strap takes a substantial amount of pressure off the top of your head.

I’m going to preface as I do with my headset reviews that I don’t have an audiophile level of critique when it comes to sound, however I can tell when things sound good or bad.

When it comes to the sound of the G733, I found myself with nothing to really complain about. It performs well in either the default stereo mode or the surround sound mode you can toggle in via Logitech G Hub, and its sound isn’t just good for gaming, but is also great for listening to music, as it has no problem handling bass. 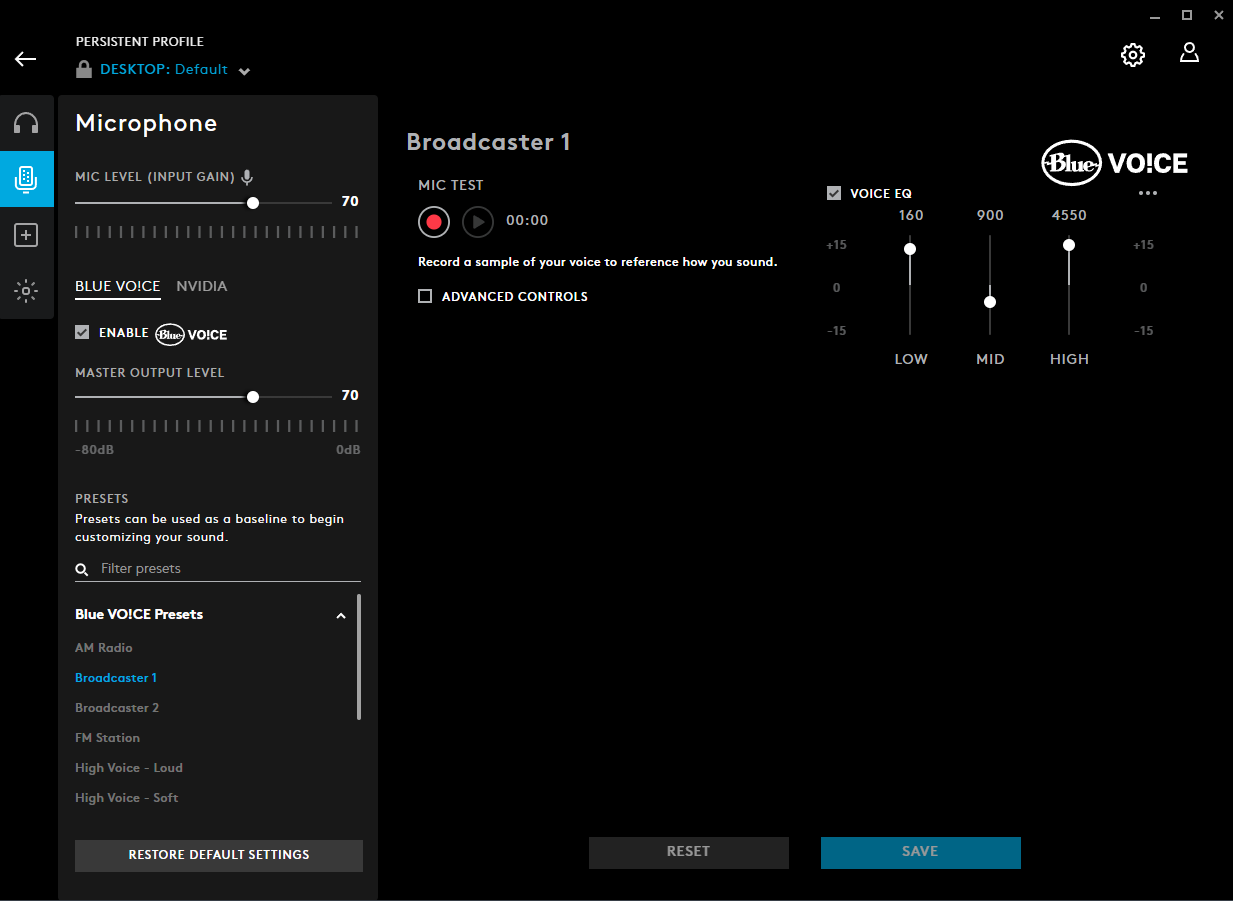 The audio from the microphone sounds fine out of the box, but is significantly enhanced by enabling Blue Vo!ce in the G Hub software, as it uses custom presets to better utilise the microphone, resulting in an impressive sound that your buddies on Discord or in-game are going to appreciate.

Performance wise, the Logitech G733 does what it should, providing high quality sound through its PRO-G audio drivers, while also providing a detachable microphone that performs admirably by default, but even better when used in conjunction with Blue Vo!ce.

Although the G733 has a lot to like, it isn’t perfect, and there are a few minor gripes I have with it. Firstly, I find the headsets’ reliance on a chunky USB dongle to be just a tad disappointing, as having additional bluetooth functionality would make it far more reliable for use across a myriad of devices.

I also can’t help but wish that the headset was built for more than just a PC in mind. As I mentioned, the headset does work on the PS4/PS5 and Nintendo Switch (when docked), but only in stereo mode without the ability to adjust things such as the RGB lighting, which cannot be turned off when used on console. The fact that they work on consoles is better than nothing, but it would make them a far more ideal product if they worked on consoles to the level they do on PC.

If you’re gaming largely on the PC, then I would recommend the G733 if you’re after a reliable and comfortable wireless gaming headset that will withstand countless gaming sessions. They look great, sound great, and offer plenty of welcome customisation options through the G Hub software. They are quite pricey with an RRP of AUD$299.95 but seeing as they’re often on sale for as low as AUD$180, they’re more than worth the price of admission if you can nab them for that much.

If you play predominantly on console, or exclusively on console, then I find it hard to recommend the G733, especially at the premium price. There are countless other headsets designed for consoles that will likely do more than the G733 for less. It’s still a solid headset on these devices, don’t get me wrong, but you’re paying a premium for features you can’t use, like surround sound and Blue Vo!ce to name a few.