2K and Hangar 13’s official social media accounts have been flooded with Mafia posts today as the game series turns 20. Concept art and giveaways have taken up social media feeds to celebrate the games 20th anniversary. Originally released in 2002, Mafia went on to become a trilogy of games. And were also remade, remastered and re-released in 2020 as a Definitive Edition.

But out of all of the appreciation posts, one stood out among the rest. A job advertisement for Hangar 13’s next project. 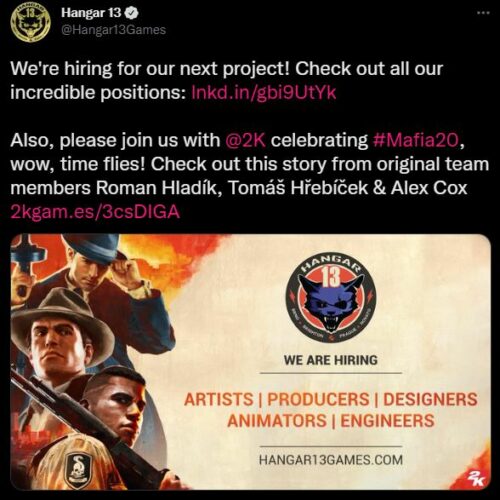 Clearly, Hangar 13 have confirmed that Mafia 4 is happening! Or at least another Mafia game. Of course, we’re years away from its completion and we’re not going to see any major details about it for a while. But it’ll be interesting to see where the next Mafia will go.

The Mafia Trilogy has told stories across four different decades. The first Mafia was set in the 1930’s mobster era, Mafia 2 between the mid 1940’s-early 1950’s and Mafia 3 set in the late 1960’s. A story set even closer to today would be interesting to see.

2K and Hangar 13 have also teamed up with Steam to help celebrate Mafia’s 20th birthday. Between September 2nd and September 6th, the original Mafia will be available on Steam for free! And to clarify, this is the OG version of Mafia, not the remake.