Originally released in 2010, Mafia II was recently put through the remastering process thanks to D3T Limited. Mafia II: Definitive Edition is part of the Mafia: Trilogy bundle made available for current gen consoles and PC. But this bundle has a slightly unconventional release being split into two parts. With Mafia’s built from-the-groundup remake still months away and Mafia III realistically only being a re-release, the second installment of the popular trilogy by Hangar 13 is currently the standout title.

Mafia II’s story revolves around our protagonist Vito Scaletta’s rise in the criminal underworld. After fighting in World War II, Vito moves to Empire Bay, New York which has obviously taken a lot of design inspiration from New York City among other locations. Monuments such as the Chrysler Building and the Brooklyn Bridge are also present within Empire Bay. The overall design teamed the music of yesteryear that I fell in love with playing the Fallout games truly sets the tone. Once in Empire Bay, Vito learns of his late fathers hefty debt which is yet to be paid back. And $2000 is, for 1945 standards, a hell of a lot of money. And as well as enough of a reason for Vito to do anything to pay off his fathers debt, even if it means being made into a mob family. The story of Vito’s introduction and work in the criminal underworld spans from the early to mid 1940’s and into the 1950’s. It also takes almost as long in game years for the action to truly kick in. The first half is mainly spent driving the streets of Empire Bay going from A to B, visiting NPC’s and just generally learning the ropes in regards to gameplay mechanics. The second half however is all about the action as Vito strengthens his reputation within the mob. 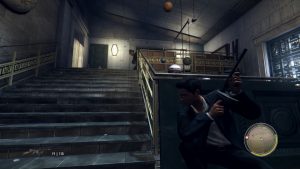 While it looks like a Grand Theft Auto that’s set in the 1940’s/50’s, Mafia II’s very linear in comparison. Creating a story within a large openworld but not offering side missions or any worthy activities to take part in is a bit of a letdown, apart from the very NSFW Playboy collectibles and Wanted posters scattered through out Empire Bay. Overall I think of it as Openworld Lite. This isn’t to say the story missions weren’t fun though. The campaign offers a wide variety of gameplay including car chases, gun fights, fist fights and stealth. However the add-ons included with Mafia II: Definitive Edition showed off what the openworld setting should have offered. The Betrayal of Jimmy and Jimmy’s Vandetta involve a new protagonist named Jimmy. Progression through his story feels similar to that of the first Assassins Creed game. While you do have somewhat of a choice in mission activities, the missions themselves don’t last very long. Each mission is a race against the clock for completion and includes a leaderboard to compete against as well. This kind of cheapens the experience and gives it an arcade game feel. The third add-on, Joe’s Adventures, does away with the openworld choose-your-own missions and returns to the linear style of Mafia II’s campaign. Honestly I would have loved if they made the scenarios in from add-on content the side missions for the base game, minus the arcade-like mechanics. 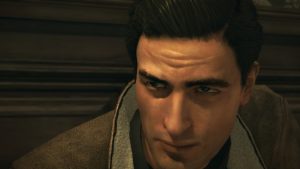 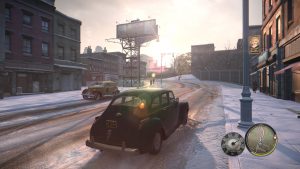 But a lot of you already know what to expect from this decade old game and are here more so to read about the remastered product. I reviewed Mafia II: Definitive Edition on my OG Playstation 4 so keep in mind there weren’t any high-end PC ultra 4K graphics. From what I saw however were some very nice visual upgrades with certain aspects showing their age. Character models obviously look a lot more polished with details such as hair and faces looking more refined close up than last gen consoles could. Finer details in environments such as roads, dirt paths, etc. Also showed improvement. But elements like buildings and objects in the distance didn’t seem as breath taking. While Mafia II: Definitive Edition does look like nicer overall than its original release, I do feel that it’s best experience on a high-end rig. My console did show its age in regards to how it performed during my playthrough as well. I’m unsure how it would run on a PS4 Pro but there were quite a few moments where frames got a bit jumpy. Unfortunately my consoles/PC and displays are due for an upgrade and since this is as a remaster I would have loved to have played this on a high-end PC or higher grade console to see its true potential. 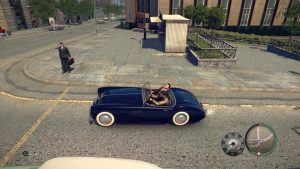 Unfortunately there were a couple of bugs during my time with Mafia II: Definitive Edition as well, none of which were game breaking but were more so glitches. Most involved my car clipping while it was parked while others involved songs played during cutscenes repeating on themselves over and over even after going back into the gameplay and NPC glitches. Vito’s best buddy Joe for example became completely inanimate when he jumped into my car on one occasion. Usually he would interact with you and have a chat but this time around he looked as if he passed out with his eyes open. I also noticed during a mission where Vito and Joe had to plant a bomb and the bomb and its wiring seemed to be invisible. It is sometimes expected straight out of it’s first release but I’m yet to notice any patch updates to have come out for it.

A part of me kind of wishes that Mafia II was getting the same remake treatment as its predecessor. But the Definitive Edition is still a worthy enough installment for fans of the original and those who are new to the game. Again, I do recommend checking this out on a high-end PC or console in 4K if possible.

Mafia II: Definitive Edition is available now on Playstation 4, Xbox One and Steam and I give it a 7.5 out of 10.