“Mage’s Initiation: Reign of the Elements is a fantastic point-and-click hybrid adventure RPG inspired by the Quest for Glory series, with a focus on playing as an elemental mage.”

Mage’s Initiation: Reign of the Elements is a point-and-click hybrid adventure/RPG developed by Himalaya Studios and released on January 31, 2019. Mage’s Initiation took inspiration from Sierra Online’s Quest for Glory (QFG) and King’s Quest series’. I recently reviewed Hero-U: Rogue to Redemption by Lori Ann and Corey Cole, two legends in the adventure game genre who developed the QFG games. Playing Hero-U really hit the nostalgia for me, so when the opportunity came along to review Mage’s Initiation, I jumped at the chance.

In 2001, a not-for-profit company called AGD Interactive, founded by Britney Brimhall and Chris Warren, made a name for themselves by developing remakes of King’s Quest I, II and III, as well as a remake of Quest for Glory II. Britney and Chris later founded Himalaya Studios in 2011 and, similar to the Coles’ path of development for Hero-U, created a kickstarter campaign for Mage’s Initiation: Reign of the Elements in 2013. Over 3000 backers helped Himalaya reach a respectable funding target which almost met all their stretch goals, and fast forward 6 years, the game was finally released on Steam, GOG and the Humble Store.

The story centres around D’Arc (pronounced ‘dark’) in the world of Ele’wold. D’Arc has been training for years under the Masters of Iginor’s mage tower overlooking the town of the giftless – the non-mage human citizens. D’Arc has turned 16 and must complete his initiation to become a fully-fledged mage. You first talk with a fellow student named Bort who is an earth mage and looks after the Records Hall. Conversations are fully voice acted with most characters having their own detailed portrait featuring great lip syncing. There are over 9,000 lines of dialogue which is very impressive for this type of game. 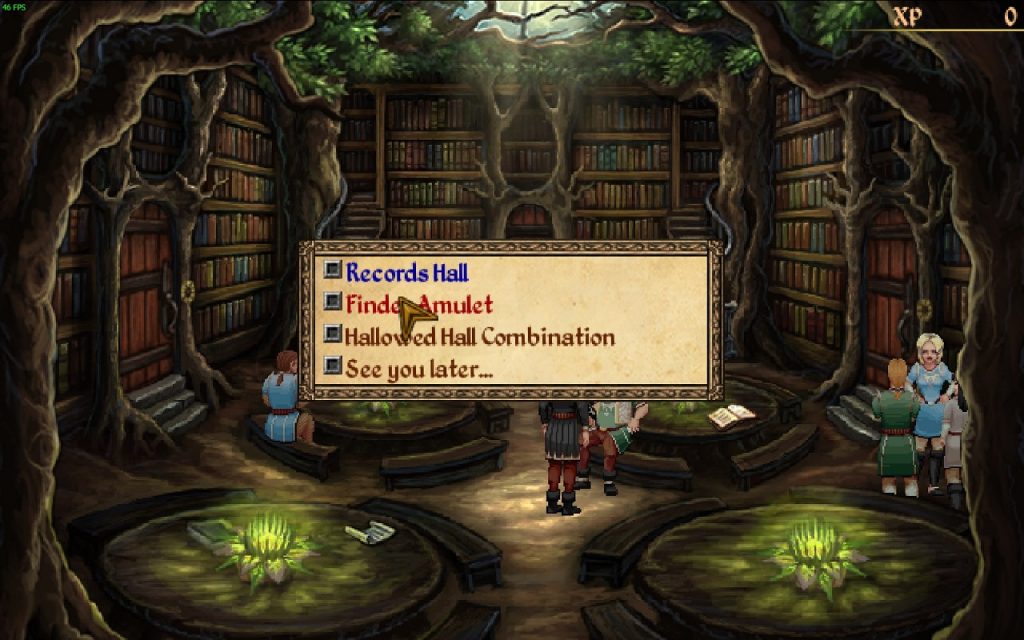 As is the case with most adventure games, it’s worth exhausting all conversation options before moving on which will inform you of important details and possible side quests. Bort tells you the combination you must enter on the magical doors to access the Honored Hall where the Masters reside. Once you visit one of the tower’s halls, you can freely travel between them without having to enter the code again, phew. The Mage Masters ask you several questions and depending on how you answer them, will determine which of the four elements your mage will be attuned to. My answers attuned me to a water mage, but you can choose to ignore the suggestion and choose from earth, fire, air and water manually. My robe changed to a blue colour representing water. 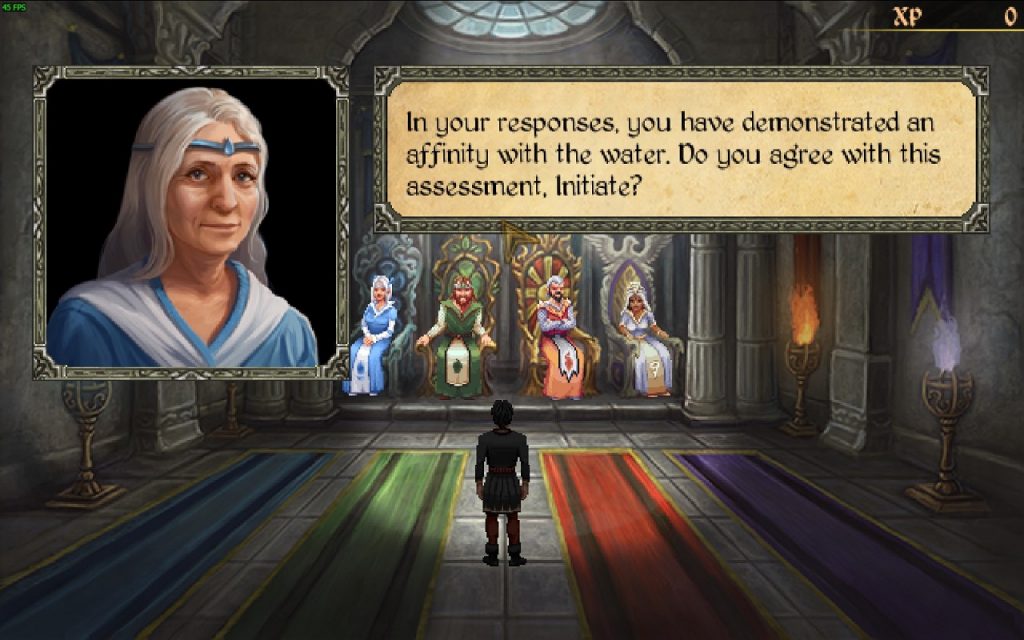 D’Arc is tasked with retrieving three items which will test his abilities as a mage, and these must be returned before the day is out:

Next you are sent to the Training Hall where you are given a Conductor which is a device mage’s use only in defence, and it is forbidden to use magic against the giftless humans in town. The conductor has two sockets which can be loaded with magical crystals and artefacts found through the game. These magic items will give you bonuses to your stats, making your spells stronger and increasing your health/mana points. You start with two base spells and two combat spells, and these will be different depending on which element you are attuned with. I utilised the teleport spell frequently once I had unlocked all the teleporters in the lands. Some of the base spells will help you solve several class-specific quests spread throughout the game. Situations such as a water mage using a jet spray of water to knock something down from height or a fire mage melting the lock on a chest. This gives the game some great replay value. 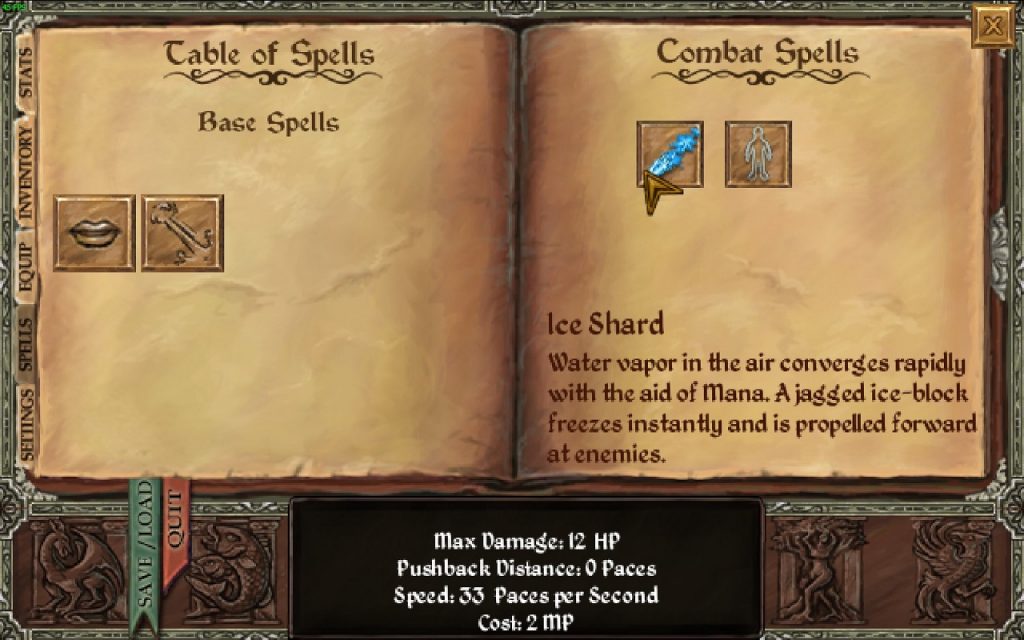 You are given an opportunity to spar with fellow students and this is where we are introduced to the combat system. It is an active combat system like the early QFG games. Once combat starts, both you and the enemy are free to move and cast spells at each other. You can pause combat by moving the mouse to the top of the screen which is handy to change spells or drink a potion while you learn the hotkeys. My first combat spell, Ice Shard, can be cast even if you run out of mana and becomes your go-to spell for majority of the game. The second spell is a protection spell which comes in handy, especially if you accidentally cast hail on yourself. When you are fighting monsters further into the game, you must be aware of your surroundings and can use items in the environment to block line of sight. Like in QFG, you can run off-screen if you need to regain some health, though be mindful that they will chase you. Similarly, monsters will run away from you when their health is low, so keep firing! I was bested in training combat on my first few goes as it was clunky to move around and try dodge incoming spells.

It would take me until about halfway through act 2 before I was confident in the combat system which isn’t a complaint, it’s just a bit of a learning curve, especially when you get to the last fight of act 2. Heal and mana potions can drop as loot or be bought cheap in town. Occasionally loot such as gold and crystals will land on the ground but will be obscured by a nearby tree or shrub, preventing you from picking up the items using the mouse. Thankfully you can walk up to the corpse and press ‘e’ which will pick up the obscured loot. A big note here that I recommend in every game and is echoed as the sign off by Pete and Dan on the Game on AUS podcast – don’t forget to save the game! I fell victim to this a couple of times again, losing 30-45 minutes of gameplay forgetting to save. Will I ever learn?!

I did find that over the course of the game I had looted a fair number of crystals. I sold a few early on to make some gold, but I only swapped out my crystals when they were almost completely damaged, which wasn’t often. Some of the brooches you find in the game have almost too powerful stats, buffing your health and mana, which makes them hard to replace. If your crystals or brooches do become damaged, make sure to take them to the Blacksmith in town who will repair them for a small price.

As your character gains experience and levels up (max level 10), you can distribute points into the four main stats of strength, magic, intelligence and constitution. Your hitpoints and mana will increase, as will the strength of your spells. Regarding xp, this game uses a points-based system like in QFG however you only earn xp points the first time you do something. If I kill a goblin for the first time, I’ll gain a point, but killing subsequent goblins won’t gain me any more xp. 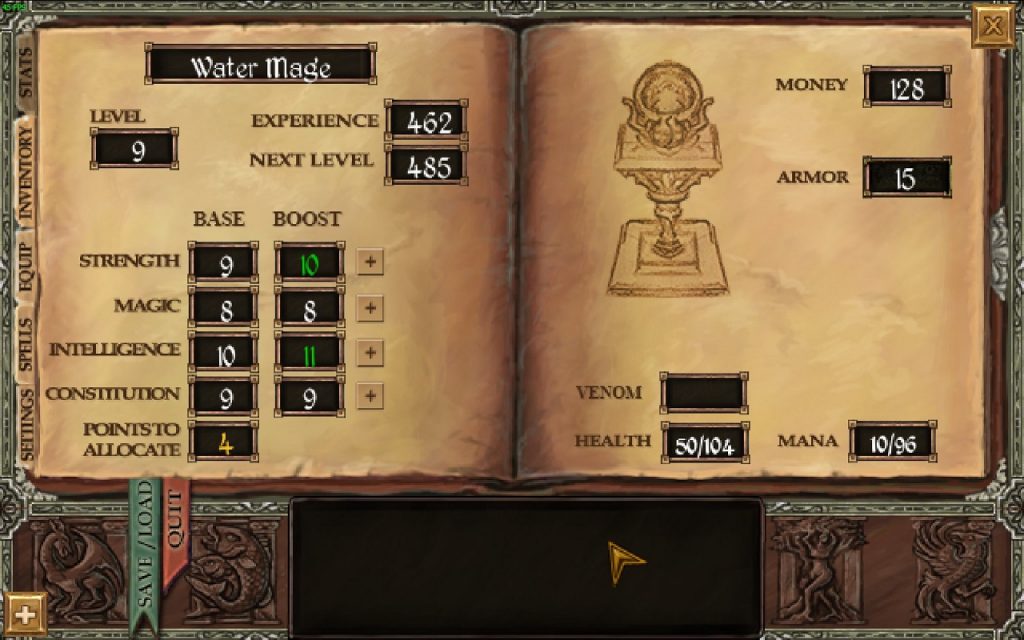 One thing that modernises this game is having three options for the user interface. You can play traditionally where you use the mouse to click-move, and right-clicking the mouse will change the mouse icon from walk to talk, look, pick up, cast spell or use the item you last picked up. I often found I would right-click too fast and then would skip past the option I wanted, so would have to click through the options again. Putting the mouse at the top of the screen will drop down a context menu where you can view your character stats, inventory, spells, options menu and so on. You can choose to change the interface to use a verb coin or a compact interface. The verb coin brings up a circular dial interface with all options around the mouse pointer, though this took up a lot of screen space, often blocking the item. The compact interface is like the verb wheel but is rectangular with small icons only, taking up less screen space, but overall the traditional setuo was the least intrusive to the gameplay. 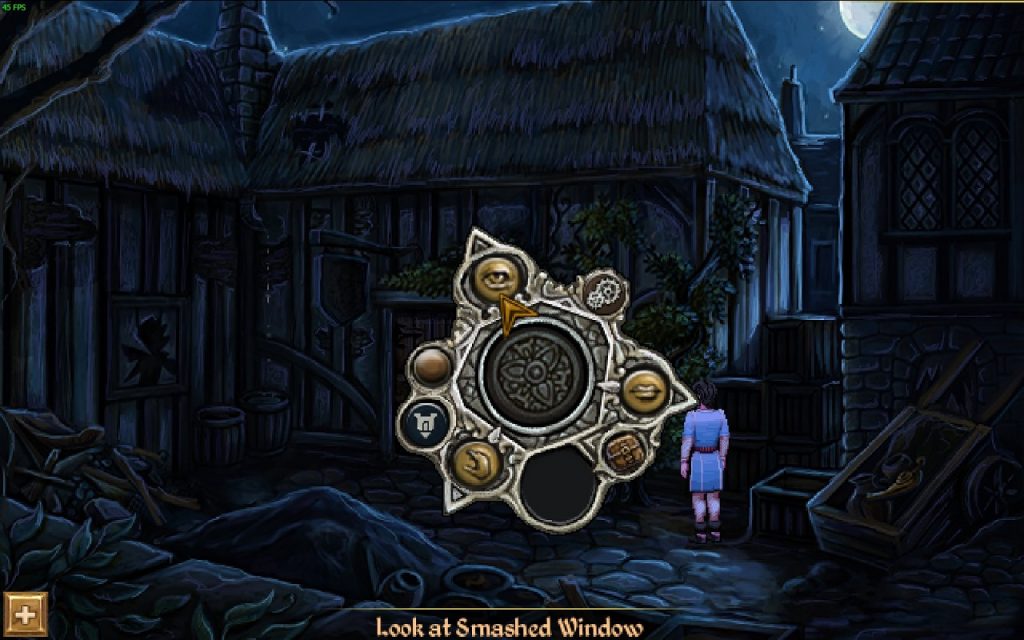 The game is split into three acts reflecting the three tasks which are written on a piece of parchment in your backpack. This is one of only a few items of reference in your backpack. There’s no other form of journal, so I was writing a lot of notes as I went along. In the forest and wasteland especially, I started to draw a mud map of the area, though thankfully I found a Steam guide which contained some awesome maps! There were other times where I would have days between playing the game and when I loaded my save game, I had forgotten what I had to do. I’d love to see some form of basic journal in future games, even if it’s just a header topic like “ABC NPC wants you to collect XYZ item.” 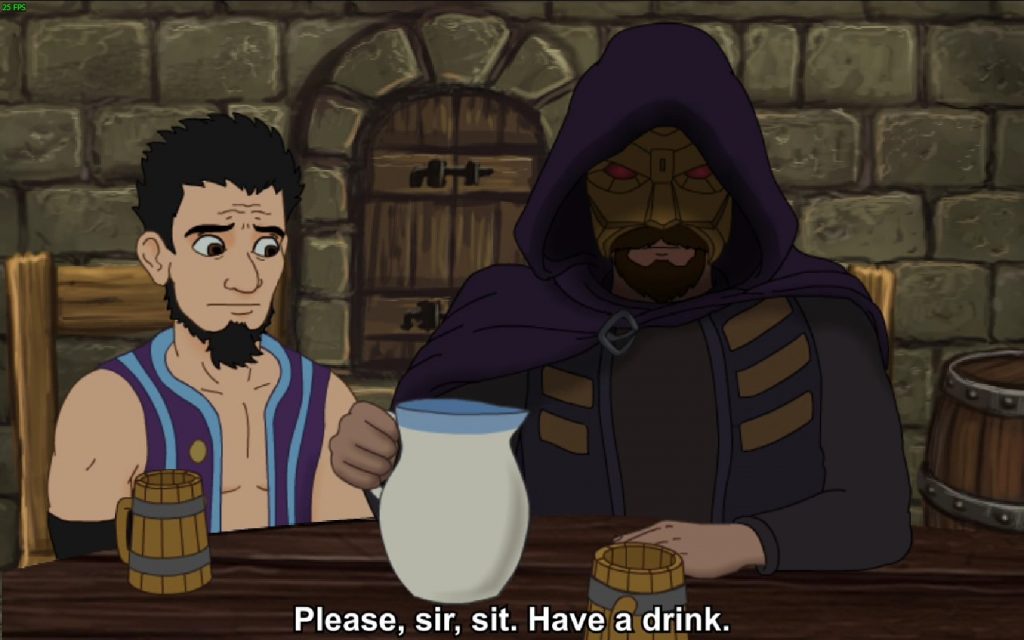 Each act is very fun to play through with some fantastic storytelling and funny moments along the way. The artwork in these environments is well done with some beautiful scenery and the music was very well suited. In between each act, there are cutscenes which look like they’re cartoons. I initially wasn’t fond of this cartoon-style but the scenes for act 2 and 3 were great. I do however think the game is stretching the limitations of the engine it was designed in. As per the game’s pre-start options, its native resolution is 640 x 400. I ran the game in a window which was using a scaled-up resolution of 1612 x 1008. This caused some pixilation in some areas but not badly enough to take my focus off what I was doing. I am a big fan of classic games like this, so I didn’t mind this ‘drop in quality’, however modern gamers may be turned off by this. 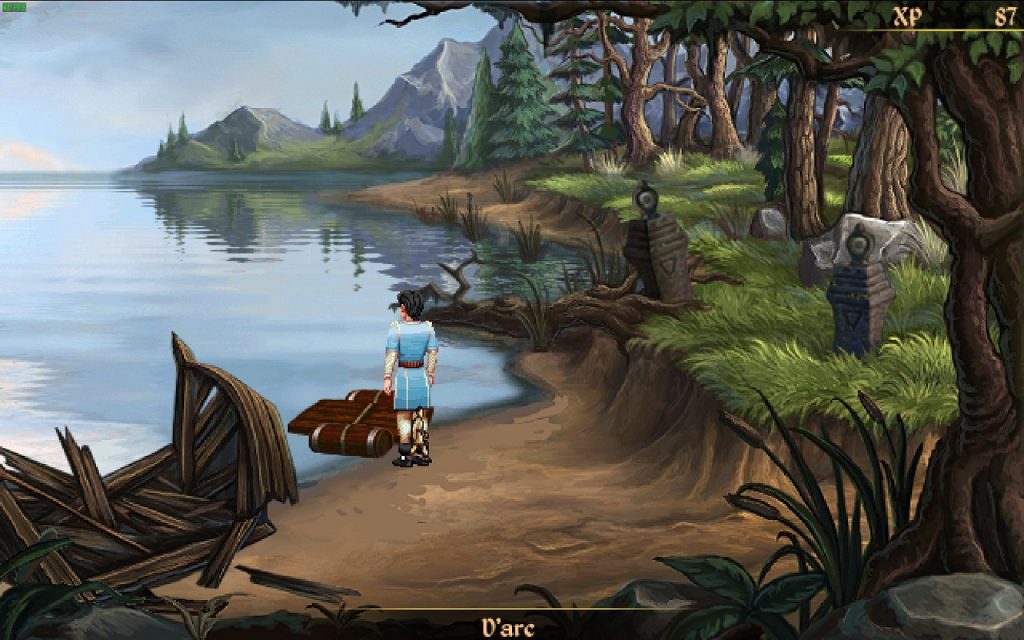 When I completed my first playthrough with 493 out of a possible 500 xp points (so close!), the game prompted me to create a save game which can then be imported into future games in this series. This, along with a sneaky end-credits scene gives me hope that there’ll be more games to follow. I very much hope Himalaya Studios is supported enough to do so.

Overall, I gave the game a 7.5/10. Mage’s Initiation: Reign of the Elements is a fantastic point-and-click hybrid adventure RPG inspired by the Quest for Glory series, with a focus on playing as an elemental mage. I enjoyed the great storytelling and fully voice-acted and lip-synced characters. The absence of an in-game journal and clunky combat may frustrate modern gamers, but for those of us that grew up with these types of games, there was a good balance of challenge, thinking and fun throughout the game.

This review utilised a game code provided by the publisher and was played on PC with 14 hours of gameplay in the Steam version of the game.