As previewed by Alasdair last month, Mario Kart Tour released on September 25 and already has smashed through 10 million downloads worldwide. This is a huge achievement for Nintendo, with Super Mario Run only reaching 4.7 million on it’s first day. The biggest non-Nintendo launch day numbers went to Pokémon Go with 6.7 million downloads, so it’s clear there has been a clever marketing drive in the lead up to launch day. The sales numbers will climb as more users become aware of it’s release and no doubt we’ll see more records broken. However, not all is ‘Peachy’ with the game, as there are many microtransactions, ‘loot pipes’ and a subscription paywall to get the best karts. 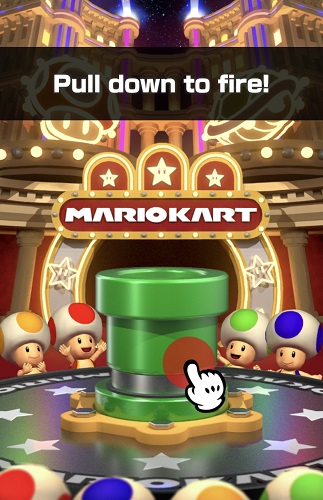 After downloading the game from the App store (or Android), you will need to link your Nintendo account, or create a new one, before being able to play. Once in, you are prompted to open a loot pipe to claim your first driver character. Mine was Toadette and a tooltip informed me she has a special ability called Triple Mushrooms. This gives you three mushrooms to use in one go for a long-lasting boost. Next you get to choose a control method from simple or drift mode. Simple means you simply slide your finger left or right to steer, and drift mode means you will drift when you slide your finger left or right. I chose simple but you can change this later in the game’s settings. 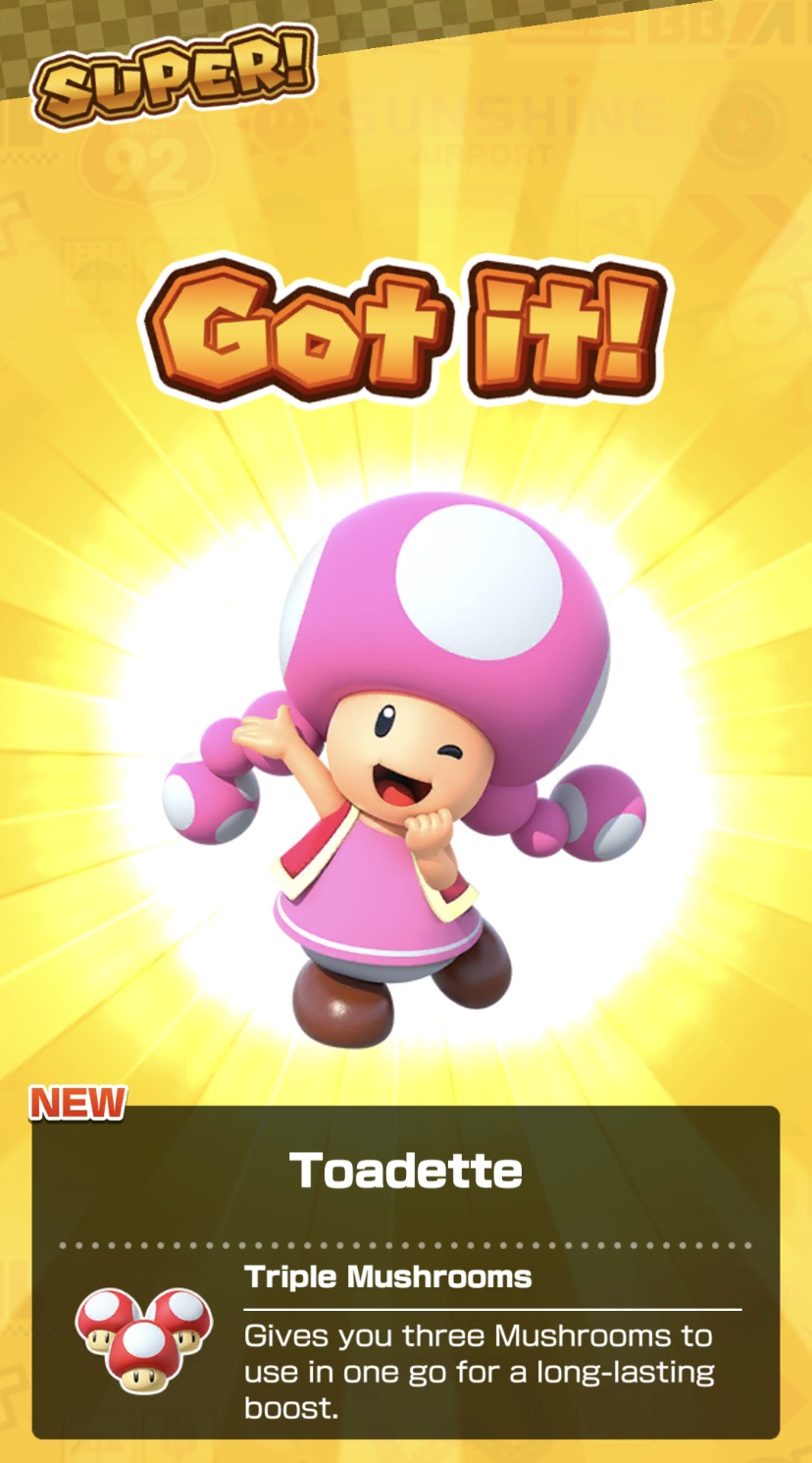 Next you are shown the first group of races, the New York Tour – Mario Cup. After selecting the track, you then need to select the character to race with, the kart and the kite. At first you are limited to the character you spun out of the loot pipe and a basic kart and kite. What you can see here are three tiers per selection. The top character tier gets three items per Item Box found in races, the second tier gets two items and third tier where Toadette is, gets one item per item box. When choosing a kart, the top tier gives bonus points x2, second tier gives bonus x1.5 and third tier where my kart is gets x1 bonus points. Finally, my choice of kite was limited to Toadette’s default which was a tier 2 kite. Tier 1 gives combo bonus x3 and big combo-time boost, tier 2 gives combo bonus x2 and combo-time boost and tier 3 just gets combo bonus x1.

When you confirm your selections, you are placed into a lobby while the game assigns 7 other players to your game, then it loads you onto the track. I realised these are not real players you’re racing, rather just their avatars, as I had a call come through halfway through a race. After finishing the call I switched back to the app and resumed racing. I have a brand new iPhone 11 so the graphics look crisp and the music gives me those Nintendo nostalgia feels. A tip you learn after about 4 or 5 races is, similar to playing Mario Kart on other Nintendo devices, once the counter gets to two you can hold your finger on the screen, then release it just before the counter reaches zero and you’ll get a speed boost. Acceleration is automatic, so without knowing this on my first few races, I was cursing the couple of players that got the starting boost. Once you’re off, it’s a matter of sliding your finger left or right to negotiate the race turns and a semi-transparent arrow shows your orientation. It took me a couple of races to fine tune my finger sliding to make the turns and also drift. Running over an item box will cycle through the usual items such as red and green shells and bananas. You can activate mushrooms by pressing the screen and you can fire off shells and bananas by sliding your finger up or down depending on which way you want to fire them off. 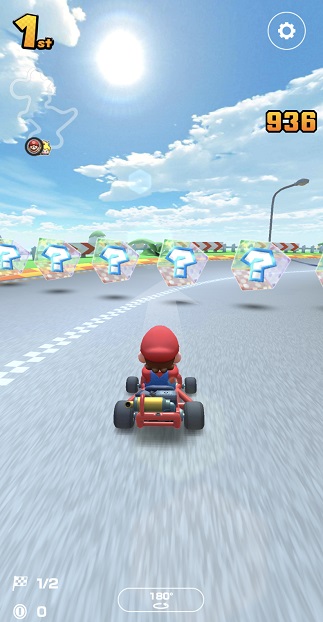 Remember that I earned Toadette as my first character and her special ability is triple mushrooms? If you have a character unlocked that is tier 1 for that race, when you run over an item box it will give you three items to use. If you get triple of something, when you use them you will go into a frenzy and gain boost which can earn you back a few places or extend your lead. Once you finish a race, you character, kart and kite will earn position points. The position points earned will increase depending on the cc of the kart and your race position. There are generally five star ratings with a position points requirement, and in the first few races I easily earned enough points for five stars. These stars are used to unlock additional cup tours. You will also earn player level from races. You will gain or lose experience based on your position in the race and you’ll gain more experience when racing a wider variety of courses.

With this comes level up rewards in the form of coins, rubies and other items. Rubies can be used to fire off the loot pipe or to play Coin Rush (a race filled with coins which is a great way to build up your coin stocks and unlock more characters, karts or kites). It costs 5 rubies to fire off one loot pipe, or 45 rubies to fire off 10 pipes. This is where microtransactions start as and you can buy rubies for real money from $2.99 for 3, up to paying $109.99 to unlock 135 (105+30 bonus). There are daily login rewards to tempt you back each day, and earning enough experience to unlock levels 2 and 3 will unlock 100cc and 150cc karts respectively. However, to unlock 200cc karts, you are required to purchase a Gold Pass for a monthly subscription of $7.99 per month, and this was a real disappointment for me. There is a 2-week free trial for the first time you sign-up for it but the fact remains you need to subscribe to play the best kart. Also with iOS users, if you do take up the free 2-week trial, be sure to cancel it with more than 24 hours remaining. In the notes section of Gold Pass it does say you will be charged if you cancel with less than 24 hours remaining in the trial. 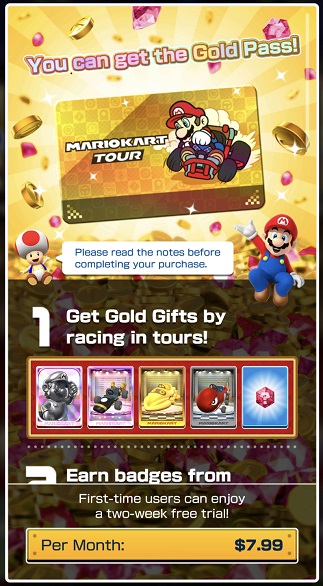 I’m no stranger to paying subscriptions for games, having started paying game subscriptions way back in 1997 to play MMORPG’s like Ultima Online. However in this day and age, money is precious and with so many games coming out in succession across all platforms, not all of us can afford to buy or subscribe to everything. You can play a lot of Mario Kart Tour without having to spend a cent, however it’s unfortunate that the best karts are locked behind what’s becoming an all-too-familiar pay wall of today’s games. When looking in the main menu, there are a couple of features either unlocked by progress or not yet released. Challenges are unlocked once you complete seven cups, and a friends feature will unlock when ranking is available. There’s also a multiplayer option coming soon in a future version update, so we look forward to being able to play with/against mates.

For more information about the game, head over to the official Mario Kart Tour website.