Nintendo confirmed the release date of Marvel Ultimate Alliance 3 : The Black Order. The game will release on July 19 exclusively for the Nintendo Switch console.

Initially announced back in December at The Game Awards and will see the first entry in the game series for 10 years. The team up game will feature characters from The Avengers, Guardians Of The Galaxy and X-Men team up to stop Thanos and The Black Order from retrieving the infinity stones. The box art features new additions like Black Panther, Venom, Miles Morales, Spider Gwen and Quicksilver to the mix.

The game will feature four player drop in/drop out co-op that can be done locally or online. You can also play with just one joy-con controller so playing with friends locally will be easy.

Nick Chavez, Nintendo of America’s Senior Vice President of Sales and Marketing, has said the following in a press release today:

“MARVEL ULTIMATE ALLIANCE 3: The Black Order brings gamers and Marvel fans together in a new action RPG exclusive to Nintendo Switch. With a huge cast of Super Heroes to choose from, assembling your ultimate team, strategically combining skills to unleash powerful attacks and preventing galactic devastation with friends has never been more fun or immersive.”

A little more info has also been provided:

In this new story, Super Heroes unite in a race across iconic locations in the Marvel Universe to find the Infinity Stones before Thanos and The Black Order use them to unleash cosmic chaos. Up to four people can play together in local* or online** co-op, with the ability to drop in and out at any time. 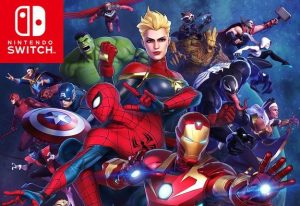