Dinosaur Polo Club has continued to expand the features available in Mini Motorways since release. The latest update includes new Expert and Endless modes. This article is a review of the PC version of the game including the new update.

Despite a simple gameplay concept, Mini Motorways is strategy gamer heaven. Your goal is to create roadways to direct cars to their colour-matched destination.

As time passes more garages and destinations appear on the map resulting in more cars utilising your carefully planned roadways.

The strategy of the game lies in managing your limited resources to balance the demand on the roadway network. After each week of in game time passes, you will be offered and choose between motorway upgrades, like roundabouts, traffic lights, bridges, tunnels, and highways, as well as additional road tiles.

The controls on PC are easy to pick up. You place roadways and other upgrades using the left mouse click. You can remove any misplaced road tiles or upgrades using right click. The controls are customisable, and the developer has included other accessibility features like a colour-blind friendly option. Gamers can rejoice as there is also a night mode!

There are many maps to unlock based on cities around the world. Each city also has challenge scenarios to test your motorway building strategies.

For gamers who like thrive on competition, there are world wide score boards for each map, with additional daily and weekly challenges to see how you measure up against the best of the Mini Motorways player base.

The audio design for Mini Motorways is similar to that in Mini Metro, which is unique and difficult to describe. Each event on the map has a unique sound attached to it. A cute xylophone-style bing when a car arrives at their destination, a lower pitched ding when a destination marker appears, rustling sounds as cars travel on the roadway, with a background of gentle percussion and humming tones – while charming at first, all of these sounds build as your city grows, becoming chaotic, discordant, and overwhelming.

By design, I can see the audio is intended to create intensity, but during longer sessions playing the game I found myself turning down the volume of the game sounds.

The minimalistic and colourful art design in Mini Motorways is cheerful and clean – perfect to aid quick and strategic decision making. 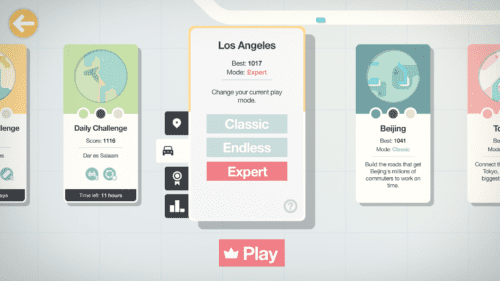 The new Expert mode is for players who are seeking more challenging gameplay. In Expert mode road and upgrade positioning is locked a short time after you place it on the map. This adds an additional level of difficulty as you can not change your placement to adapt to new garages or destinations that appear as your city expands.

In Expert mode you also only receive special motorway upgrades for the first eight weeks of the scenario. After the eight weeks have passed, you will only be able to choose road tiles for your weekly upgrade offering. 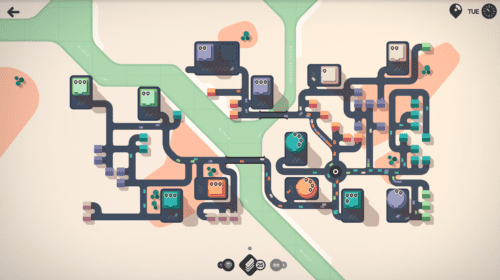 The new Endless mode allows players to create without restrictions of game-ending conditions. In this mode you continue to receive motorway upgrades to design your dream transport network.

Endless could be described as a sandpit mode – built for gamers who don’t like to worry about scores and competition, and enjoy the long term strategy of a scenario without the worry their plans will be foiled by a game over screen.

Mini Motorways is recommended for players who appreciate simple gameplay with a heaping of strategy. As an avid strategy gamer, this is the kind of gaming experience I lose myself for hours in. The new Endless and Expert modes add to the gameplay styles available making this an accessible and flexible title for gamers seeking casual or challenging gaming fun.