There are a few of us in the Game on Aus community that have been playing games together since we were kids. My favourite genre of games, and where some of our fondest gaming memories come from, is Massively Multiplayer Online Role-Playing Games (MMORPGs). We are going to take you down our memory lane as we explore our origins playing MMORPGs from the late 90’s through to today in a multi-part series over the next few weeks.

In Part 1, I explained the origins and wonders of Ultima Online (UO) that I still play today. You can read that article here. In this Part 2, I will give you an overview of 1999’s EverQuest (EQ). At that time I was so hooked on UO, running my own emulated servers from 1998-2000, that I never actually played Everquest or even Asheron’s Call (AC) at release. I will cover AC in the next article, but both EQ and AC cannot be forgotten as they really laid the foundations for the 3D graphics engines, user interfaces and gameplay of MMORPG’s that we play today. 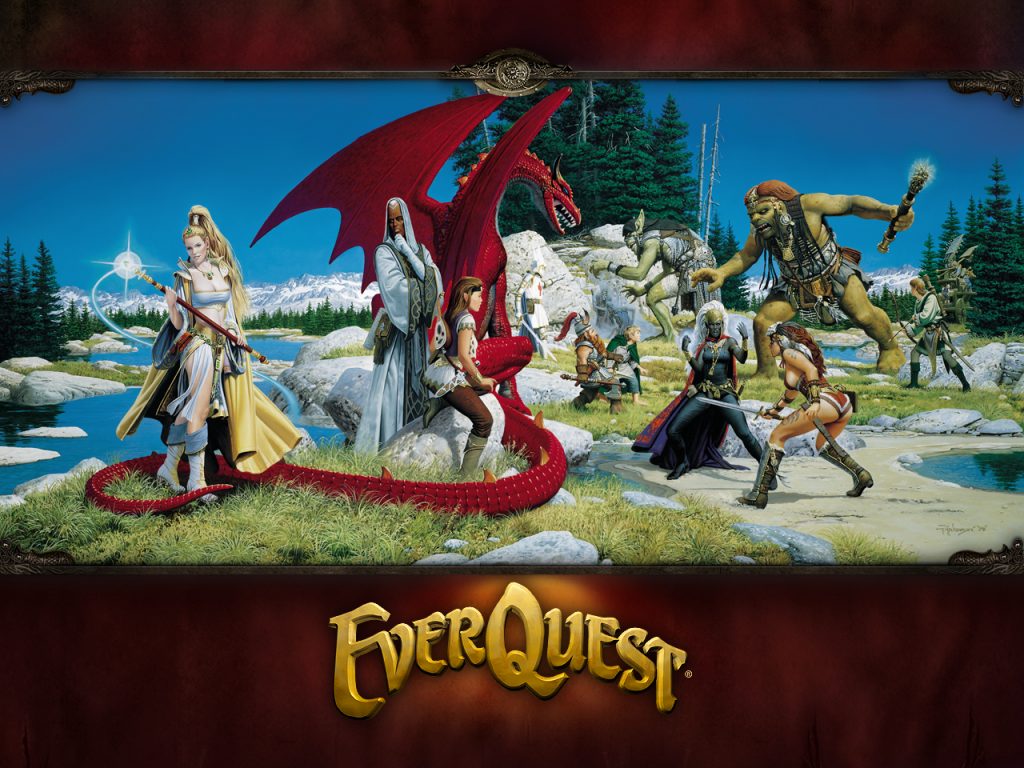 EverQuest was launched in March 1999 by Sony Online Entertainment’s (SOE) video game branch, Verant Interactive. SOE would later be sold and renamed Daybreak Game Company in 2015. In 1999, EQ was the first MMORPG to use a 3D game engine and it’s success exploded that year. It was reported that by the end of 1999, subscription numbers for EQ had surpassed that of market leader UO. The term ‘EverCrack’ was often used to describe EverQuest given it’s highly addictive online gameplay, however in my opinion this addictive nature can be said of any MMORPG as they are so immersive.

EverQuest would go on to release 24 expansions and can still be played today as it went Free-to-Play (F2P) in 2012, on it’s 13th anniversary, and is available to play through Steam. The F2P version that we can play today gives you access to the first 21 expansions worth of content which is amazing if you’re willing to give the game a go. You can optionally pay a monthly subscription which not only unlocks perks within EverQuest such as spell ranks, additional character slots and loyalty rewards, but also gives you access to several of DayBreak’s other games such as the sequel EverQuest 2. I will cover EQ2 in a future article. I downloaded EverQuest F2P to see what the experience was like in the world of Norrath. 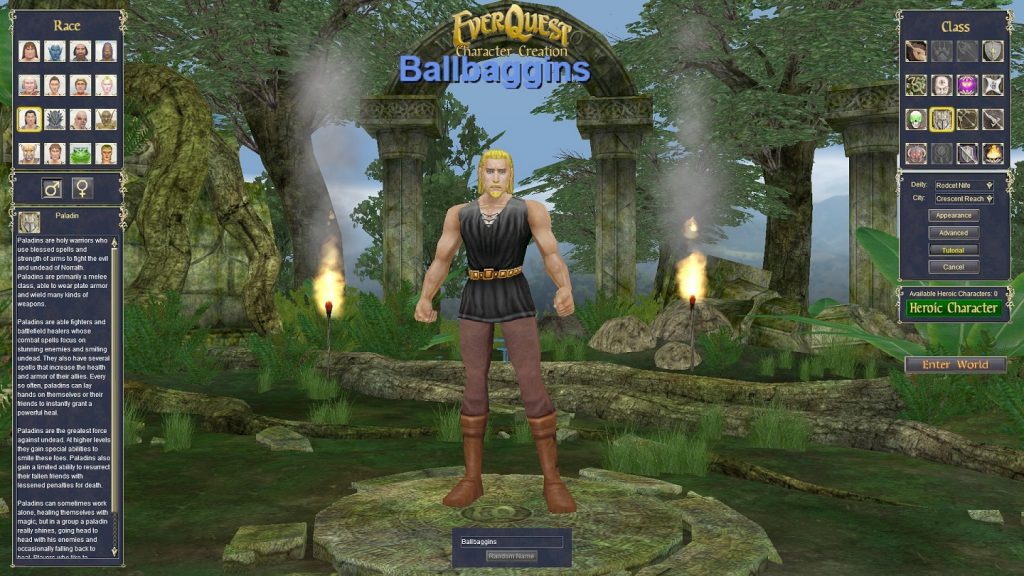 In Everquest, players created their character, or avatar as they were better known back then, and at release could choose from 12 races and 14 classes. The picture above shows today’s version of the game that features 16 races and 16 classes, some of which were added with subsequent expansions. Each race only had certain class combinations available to it. For example, my Human hero, the mighty BallBaggins (Inferno was taken), could choose from 13 out of 16 classes and so was restricted from making a Human Beastlord, Berserker, or Shaman. Lucky I love Human Paladins! There’ll be more on my love affair with Human Paladins in a later article.

Limiting certain race and class combinations was an important gameplay element back then as, not only did it mean you were encouraged to make alternate characters (alts) but also it promoted playing with other avatars. Where UO was more focused on your avatar, how you can interact with the world and featured open-world full-loot PvP, EQ was focused on co-operative teamwork with other players and PvP only occurred via consensual dueling or on designated PvP servers. 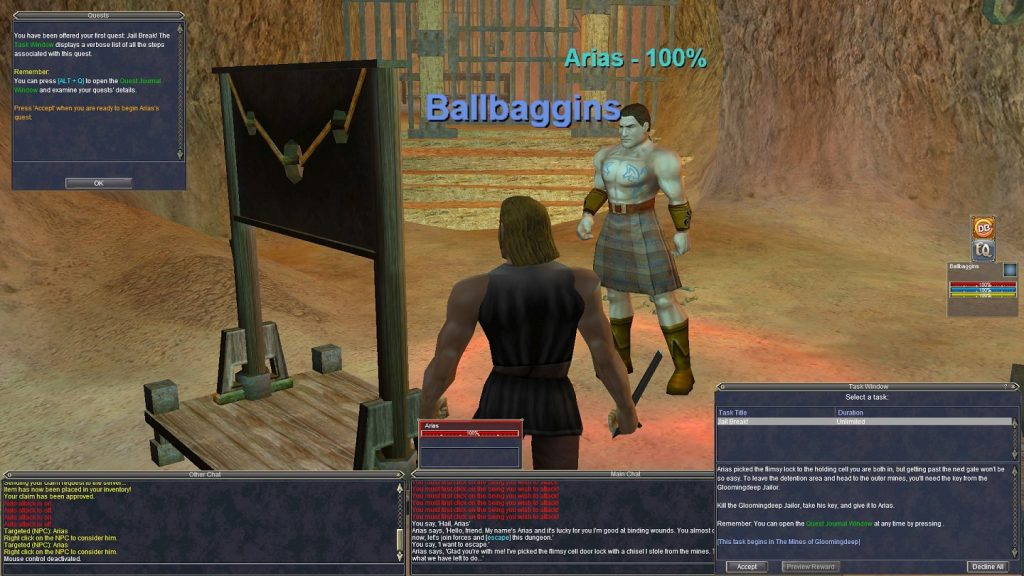 The game hasn’t aged well by today’s standards, but comparatively neither has UO. Upon entering the game there is a new player tutorial which thankfully guided me through movement, interacting with NPCs and started my first quest to escape the prison. The user interface appears to have hardly been updated after all these years. This newbie quest seemed to either bug out or I wasn’t saying the right words to Arias as once we killed the Gloomingkeep Jailor and I handed the key to Arias, we just stood there doing nothing. It took me a couple of re-logins to be teleported to the starting area of the human starting city of Crescent Reach.

Three hours later I’m still only level 4, and I’m not complaining at all. I have been running around doing errands for NPC’s as I earn favour with the council before I can speak with them to become a fledged citizen of Crescent Reach. This is where I found you had to be a patient player and to read everything the NPCs say, as the quest log is nothing like in MMO’s today. It will tell you the name of the NPC you need to find and a vague location and it’s up to you to figure out. There are no quest markers on the zone map like in modern MMO’s, and the map is very simple with only outlines and a couple of names listed for the banker and some merchants. There was certainly no hand-holding beyond the first tutorial. 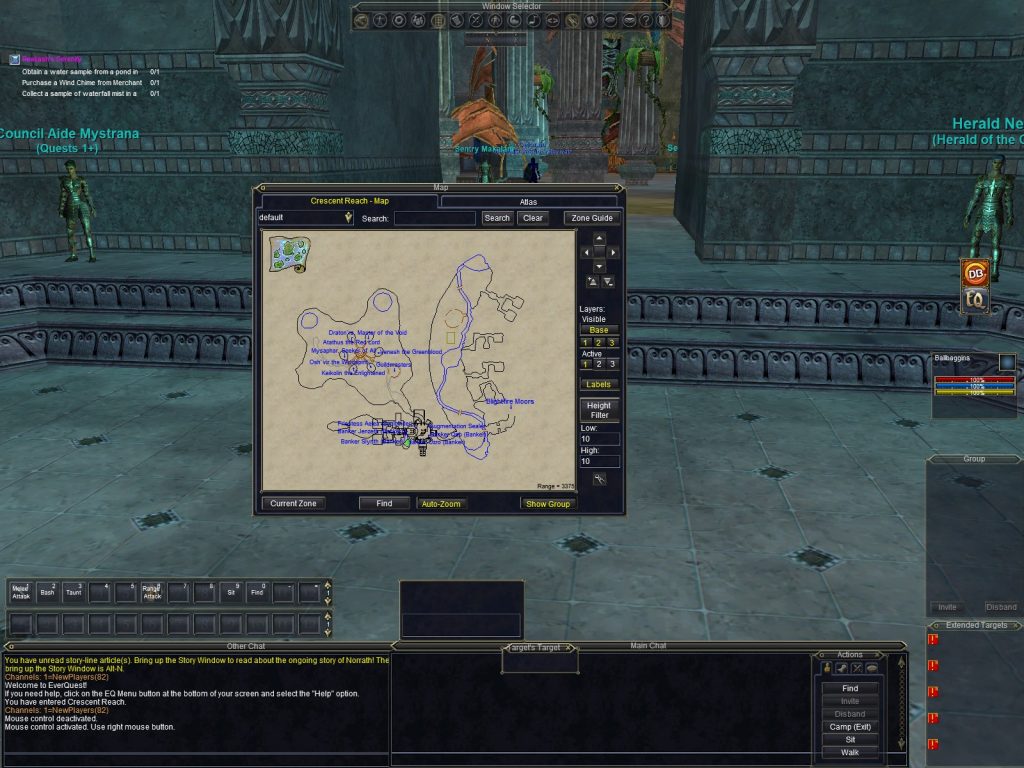 I eventually stumbled my way around the city taking mental notes as I went but at times it was frustrating. Only twice in those three hours did I have to go kill a monster for a specific loot item. The rest of the quests were fetch and talk quests. They do slowly teach you more about the game, such as how to user tailoring to craft a city banner using a sewing kit, thus proving your pledge to become a citizen of the city and please the council. I can see today’s MMO gamer not having the patience and not putting up with the very dated graphics which is understandable. 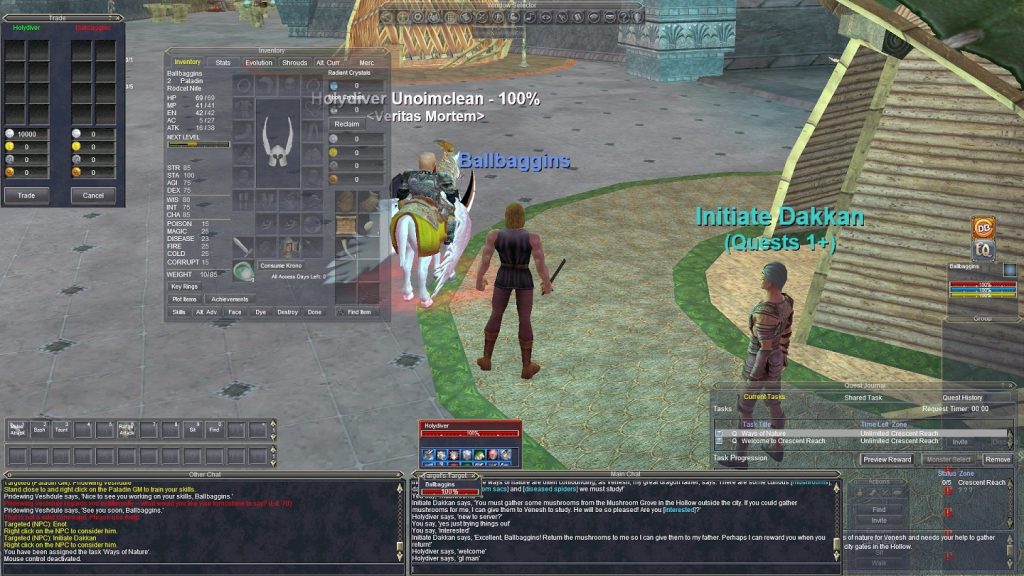 Something really classic that I find often happens only in MMORPG’s occurred to me when I was playing. I was standing at a quest NPC figuring out how to turn in my quest. Two players run up to me and ask if I’m new to the game, to which I said yes. They said, “Welcome, gl (good luck) man”, then opened a trade window with me. The first player gave me 10,000 platinum, which is the highest currency in the game. The second player gave me a chest armour piece and a sword that was miles better than my newbie ones. I thanked them and they said, “If you get bored, pass it onto the next newbie.” That good will towards new players, who are complete strangers, is another reason I love the social aspect of MMORPGs.

For me 19 years later, the nostalgia of playing these old MMO’s is still there and having now played some of the early EQ levels, part of me regrets not playing the game at release to experience the revolutionary wonder that this would have been back then. As I mentioned at the top of the article, I was busy having the time of my life in Ultima Online, and that’s what’s most important with MMO’s, enjoying your time in them as you have invested a monthly subscription. In later articles you will hear my thoughts of being caught in the hype train playing other MMORPG’s at their release dates and how MMO’s evolved over the years.

If you have great memories of playing the original EverQuest, I’d love to hear about them! Join the Game on AUS – God Mode closed group where you’ll be welcomed and we can reminisce the old days. In the next article I will round out the last of ‘big three’ MMORPG’s of the 90’s with Asheron’s Call.