Moving Out. It’s something I had to endure nine times before the age of 30. I count myself lucky, for now, that I’ve only ever had to do it locally with no more than half a house worth. Regardless, it’s a total pain in the arse and I loath having to do it each time. Ironically I’m absolutely stoked however to finally get my hands on the moving-simulator, Moving Out.

This is the birth child of Australian developer SMG Studios, who were behind last years O.T.T.T.D, and Swedish developer DevM Games. Moving Out is a fast-paced experience that requires efficiency, speed and strategy to get the job done. As a Furniture Arrangement & Relocation Technician, you’re sent all over town packing up houses and getting everything on the truck before time runs out. Moving day’s a mad dash and it’s very easy to become overwhelmed and panicked midway. You’re not alone though, multiple F.A.R.T’s can help out with up to three friends capable of joining via couch co-op. But in a world where quarantine and isolation is currently the norm, is Moving Out playable without friends? And more importantly, is it as fun and rewarding being a lonely F.A.R.T? 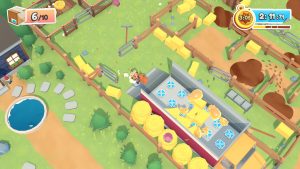 Marketed mainly as a couch co-op game, Moving Out can be played the entire way through solo. After customizing your character and a brief training rundown on being a successful F.A.R.T, you’re left to your own devices as you’re sent out on various moving jobs. Moving household items from A to B is easier than expected. You’ll be moving everything from small cardboard boxes to large odd-shaped couches. Sometimes objects are inanimate and other times they’re live and moving. Things get real interesting when it comes to being a F.A.R.T. And whether or not you have a spare F.A.R.T. hanging around, getting an L-shaped couch down a hallway and out the door is going to take a little more effort. Large scale items like fridges, couches, beds, photocopiers, etc. can be a struggle at first as well as a super clunky process trying to move them out. You can definitely feel the weight of them in comparison to a cardboard box. You’re not just dragging around a simple game object. Big items will only allow you to pull not push and can easily get stuck in doorways, etc. leaving me in multiple fits of frustrating as the clock kept ticking.

Getting all those items packed up before time runs out may be the main goal but that would be too simple, wouldn’t it? The pressure of being the best F.A.R.T. is turned up a notch with each house having bronze, silver and gold medals depending on how fast you complete them. Getting every item item out of the house as fast as you can requires every trick in the book and a lot of practice. Playing around with different strategies is half the fun of Moving Out. Even if it means lobbing boxes across rivers, pools, front yards and out of windows. There’s also plenty of different obstacles to tackle including moving vehicles and spooky ghosts. As long the item you’re moving make it in one dry piece, you’re golden. But was I gold medal F.A.R.T. worthy? My first mission was stressful, granted it was my very first Moving Out experience. The second mission was a little easier, I started to get used to organizing the back of the truck to make sure everything would fit. The third mission I went right back to feeling stressed. Half a dozen missions in and I still didn’t get the gold. During my time with Moving Out I only once came very close to getting a gold medal, being a mere 10 seconds too late. But coming first isn’t everything, or so I thought. It’s not as if the game fails you if you’re not a top ranking F.A.R.T. However I still really wanted those gold medals as they unlock in-game VHS movies from the video store. Which is a sentence I never thought I’d say in this day and age. 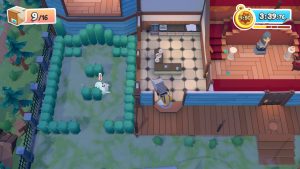 Moving Out is heavily 80’s inspired with a plethora of references including Atari, Transformers and Ferris Buellers Day Off just to name a few. There’s even a Frogger inspired level, which isn’t as crazy as one would expect but boy did it give me nostalgic feels. Along with a video store there’s also an arcade where coin awarded from completing bonus objectives help unlock new arcade games. This with the combination of the video store gives players a reason to replay houses and possibly brush up on their skills if they didn’t walk away with gold at first. A lot of the levels are definitely worth playing a second time purely because of level design. The first half of the game stays true to the standard house layout which gets kind of plain after a while. But they slowly start evolving during the second half delivering some really fun levels to race through.

So, to answer my earlier questions, is Moving Out playable without friends? Absolutely. While frustrating at times I enjoyed my solo playthrough and was thoroughly impressed with the second half.

Is Moving Out as rewarding being a lonely F.A.R.T? Not so much, surely if you practice enough the possibilities of a gold medal are definitely there. However it does offer a good opportunity to play through the levels again.In saying that it’d be a lot more fun to play with friends. Not just for the rewards but also for the social interaction which I’m more than keen to try out once isolation has been lifted. Couch co-op make for great party games with plenty of laughs and I can predict plenty of laughs with this one.

Moving Out launches April 28 on Playstation 4, Xbox One, Nintendo Switch and Steam and I give it a 8.5 out of 10.