“Mutant Year Zero: Road to Eden stands out amongst the turn-based XCOM-style games by giving you the ability to stealth around the map, scouting positions of the enemy and working out the best angle of attack based on your party’s mutation abilities.”

Mutant Year Zero: Road to Eden is a tactical adventure game developed by The Bearded Ladies and published by Funcom. It was released on December 5, 2018 here in Aus for PC, PS4 and Xbox One and is based on 2014’s original tabletop RPG. You are in control of a team of mutants in this isometric game of exploration, stealth and strategy, with XCOM-style turn-based combat. Only this game gives you more freedom to stealthily scout the battlefield and place your characters in the best positions to utilise their skillsets. You must navigate through a post-Human area called the Zone with ruined cities, collapsed caves and overgrown forest areas and scrapyards. 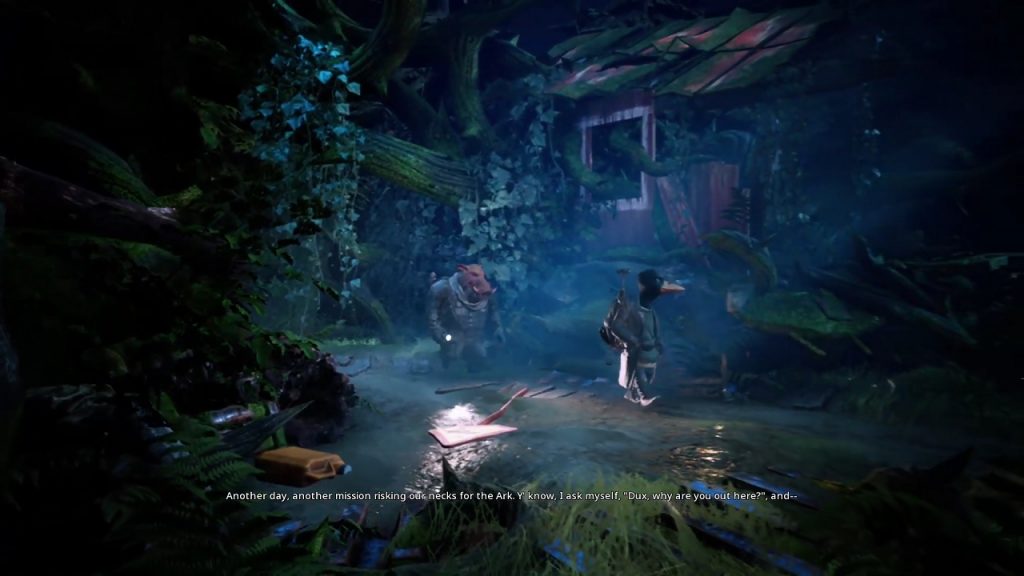 You start the story playing as Dux and Bormin, a mutant duck and warthog respectively. I love the banter between these two characters as they carry out a scouting mission to find scrap to fix the Ark’s water pumps. The Ark is humanity’s last outpost after our inaction from the ice melting, plagues and nuclear bombs. The Elder is leading us to create a new civilisation and tells us we’re safe if we never leave, given the dangers of the Zone. Our food and water supplies are running dangerously low and so relies on stalkers, adventurers who leave the Ark to explore the Zone scouting for supplies and resources. 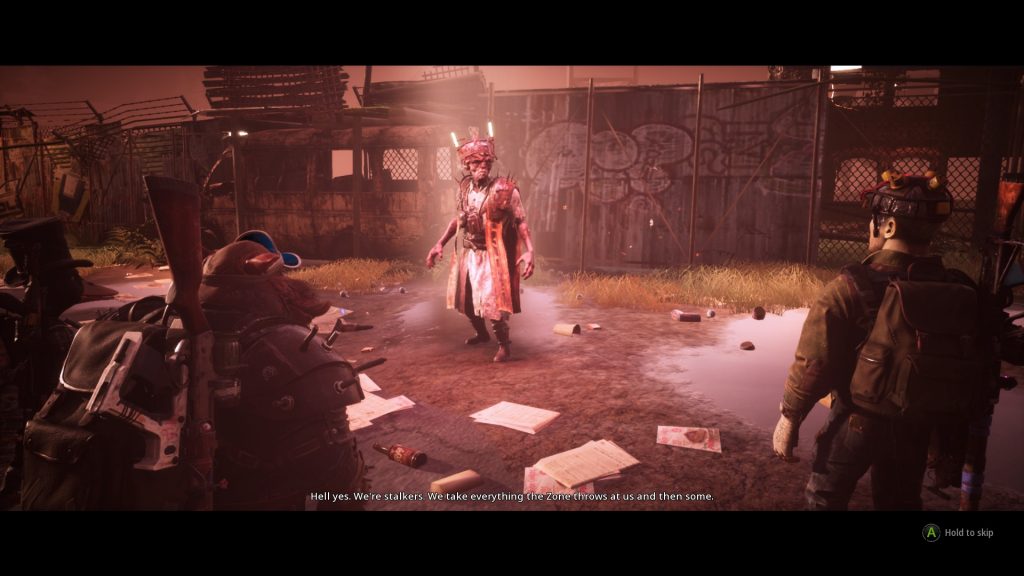 Once you take control of the characters, the music and the scene in front of you gives you an eerie intensity and almost cautions you before progressing forward. You carry torchlights and can only see in a limited circle of view around you – beyond that is hazy fog. You find some scrap which can be exchanged for weapons, consumables and outfits in the Ark shop. You come across two enemy zone ghouls and this is where you learn about stealth and positioning prior to combat. 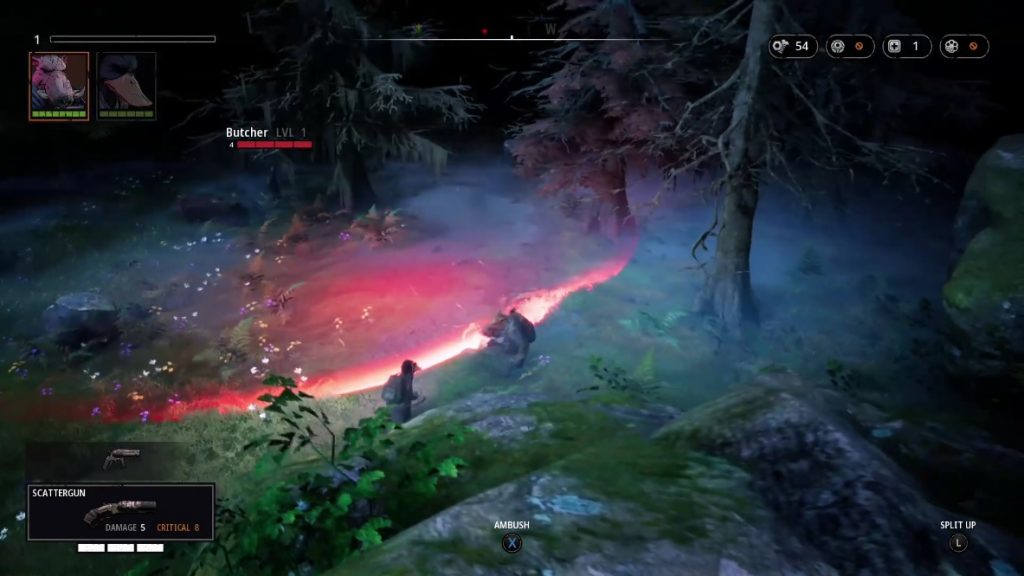 The red circle is the view range of each enemy npc. If you cross into it, they will discover you and then they’ll get the first initiative in combat. This is not ideal as you want the upper hand, so you put your torch away to go into stealth mode and this reduces the enemy’s field of vision. I was discovered a few times as I got used to this system. I highly recommend you save often prior to fights as I didn’t early on and died a lot, so had to replay through areas I had spent time scouting/looting. This was frustrating but totally my fault, so as Pete and Dan always say on the Game on AUS podcasts, don’t forget to save!

When you enter stealth mode, you have the freedom to roam around the area scouting enemy positions and npc patrol movements, as often one enemy may move further away from the main group. This is ideal because you can try to take him out in one combat turn using silenced weapons so that he has no way of alerting the others in the group. Also, some npcs like Shamans will summon three additional npcs if you don’t kill them in the first combat turn, so it’s best to try scout these npcs first and take them down quickly. This stealth mechanic is one of the main features that sucked me in and kept the game feeling dynamic, having to analyse every fight to work out the best angle of attack, hoping for stragglers to pick off. 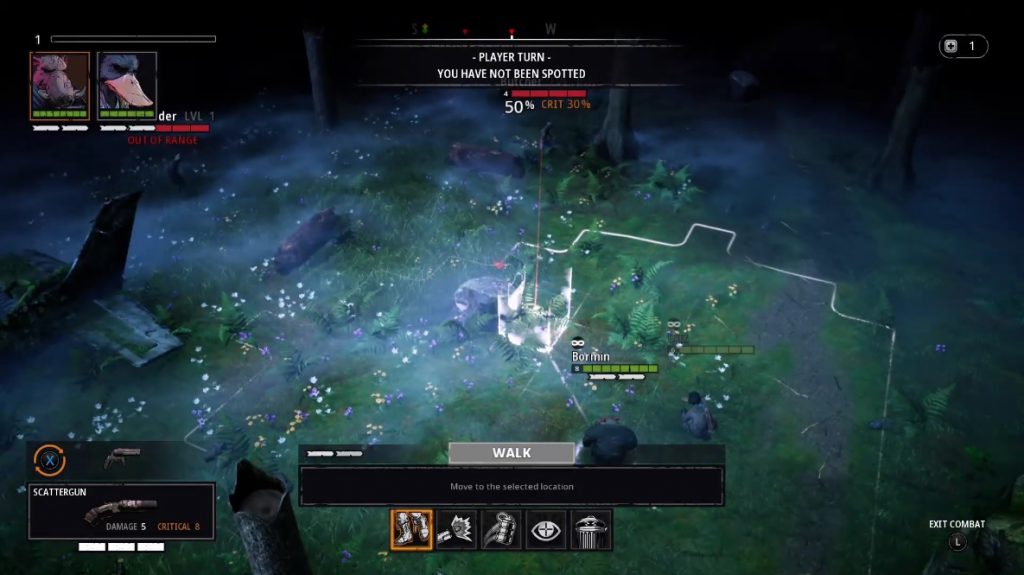 When you’re happy that you’ve scouted the area and placed your stalkers in good positions (you can split the team up and place them to suit the terrain and cover), you commence combat and it is then very much like playing XCOM. You have cover you can hide behind, both with low cover (25% defence bonus) and full cover (75% defence bonus). Each stalker in your team (max of 3) has two ability points they can use per turn. Some actions like shooting, throwing a grenade or sprinting will end that stalker’s turn. You can move the cursor around the combat field to see what line of sight you would have to the enemy before you move, and what percentage chance of hitting them you’ll have. 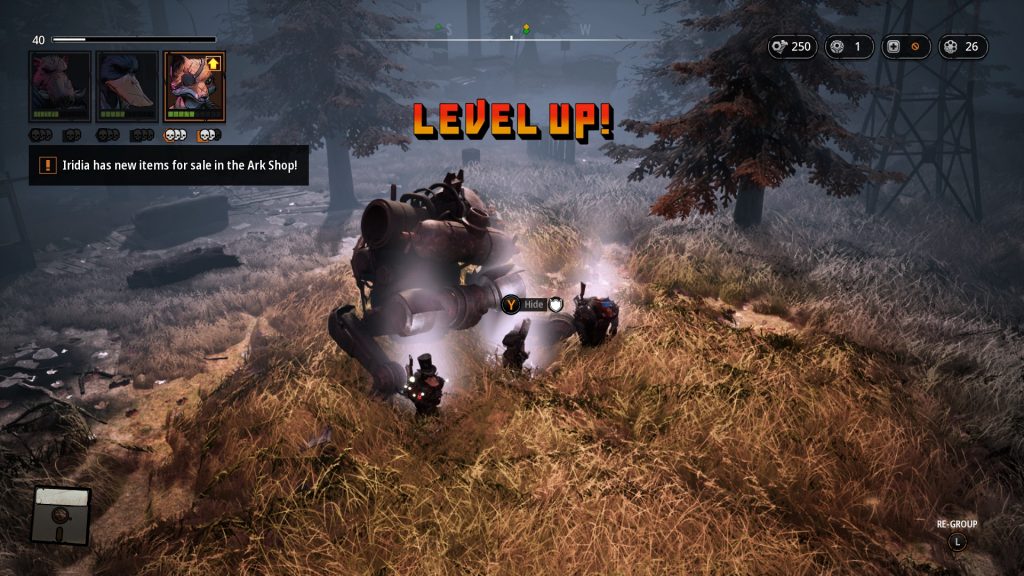 Once you have taken down all enemies in that scene, you can loot their corpses for scrap, weapon parts or weapon mods. In some battles there may be a loot chest and within these are powerful helmets, armour pieces and weapons for your stalkers. Mods and weapons/armour that you’ve looted can be switched any time in the inventory screen, but you can only upgrade weapons back at the Ark. Your stalkers will also gain XP from the kills and each level up will gain mutation points which can be used to unlock powerful combat mutations (both passive and active) or to improve the stalkers health and movement stats. 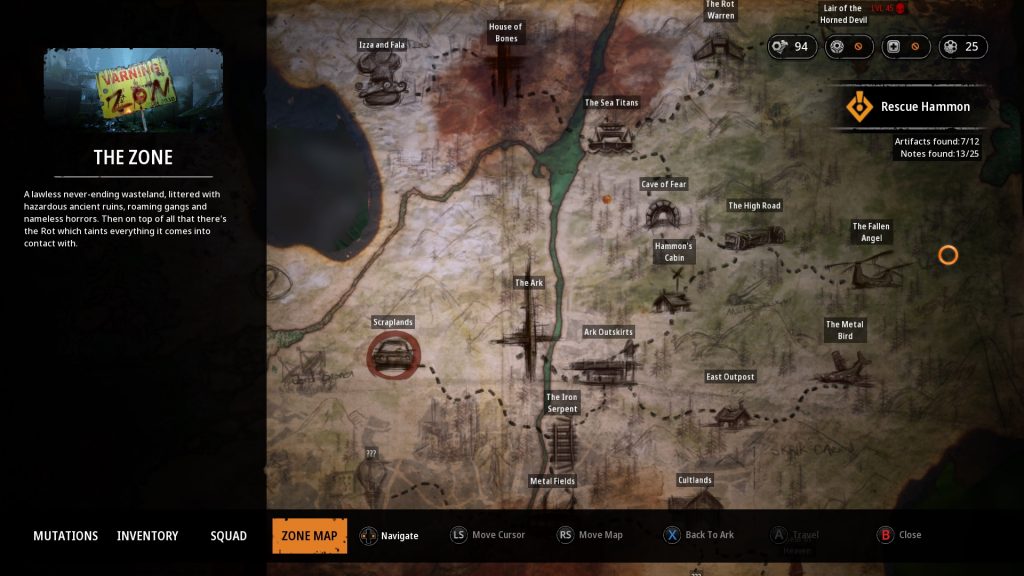 After a couple of areas, of which you can fast travel between at any time in the map window, you’ll reach the Ark. You can fast travel any time you’re not in combat, so if you had a tough fight and ran out of meds or grenades, you can travel back to the Ark to restock. Bear in mind that Iridia only stocks limited supplies, though she does restock every 5 levels you gain. 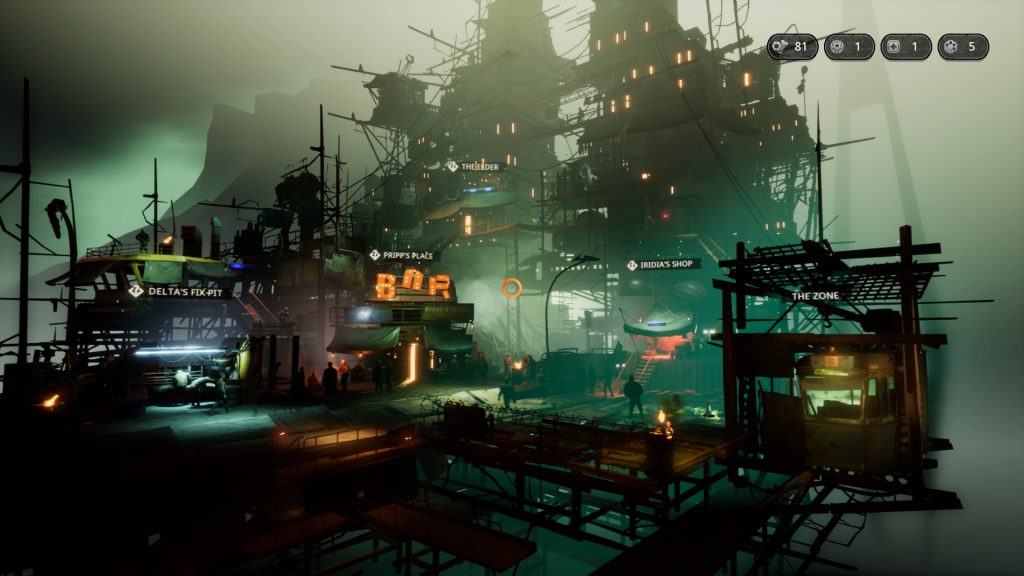 The Ark is where you can upgrade your weapons, turn in artifacts for group bonuses and purchase items such as weapons, grenades, med kits and weapon mods. You can also visit the Elder, who initially is dismayed. Lead stalker Hammon has been gone too long and The Elder fears he’s in grave danger. You are sent north to see if you can find him and his party. Along the way you will find members of Hammon’s team – Selma, Farrow and Magnus, who are able to join your team. 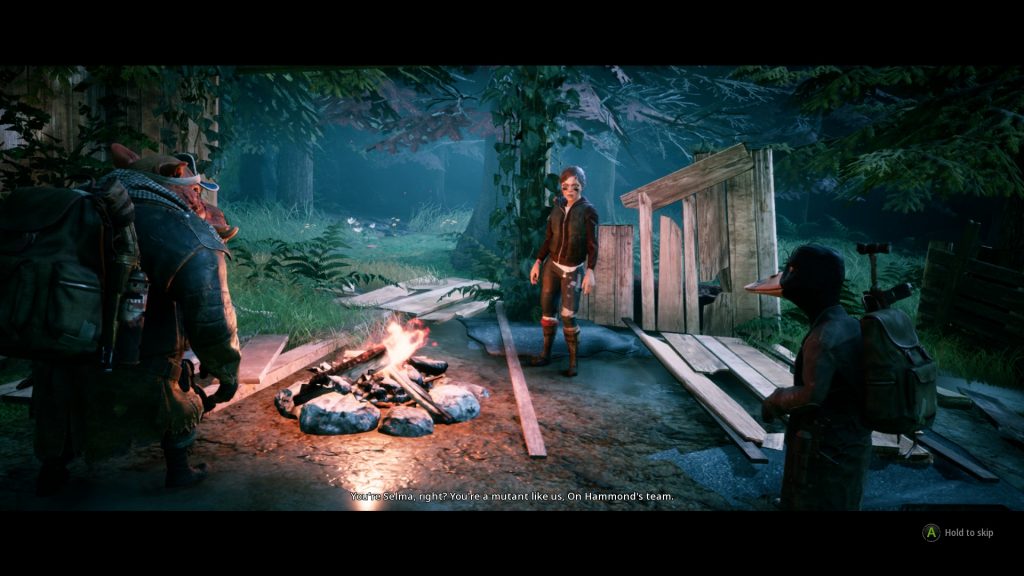 Each of them has special abilities once unlocked with mutation points that will help greatly in battle. Selma can use tree roots to hold the enemy in place for a turn, Farrow has double the critical chance when shooting whilst hidden, and Magnus can shoot chain lightning between the enemy or use mind control. There is some great versatility once you find them all. In the later stages of the game, I found I was often changing team combinations a few times as I was struggling to take down certain groups that were slightly too overpowered for my team. Many a save game reload occurred throughout the game (67 manual saves according to my game stats!).

The npc monsters you’ll face include simple Butchers and Marauders, Pyro’s will throw Molotov cocktails at your nearest team member (emphasis on spreading your team here), Hunters will hunker down behind cover using overwatch, Shaman’s will summon 3 reinforcements, Tanks have high HP and will charge a team member, destroying any cover they had, and priest mini-bosses like Brother Bodin and Chief Husse will use chain lightning and mind control. Then there’s the mechanical robot enemies including med-bots and the huge mechwarrior-type MIMIR 2600’s – it’s worth saving your EMP grenades for these bad boys. 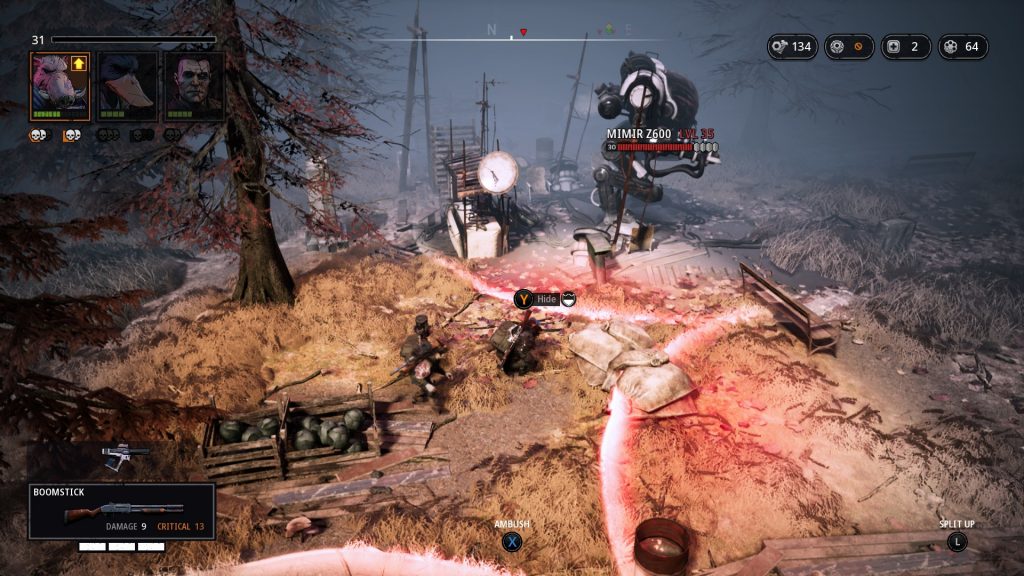 The mechanical robots are the tough ones. They have a lot of HP and alert any other nearby mechanics, especially bloody med-bots! Once you engage a fight, again if you don’t disable them in the first round, med-bots will run off and resurrect any npc that you’ve previously killed, even if it was on the other side of the area you’re in. I then made it a priority to take these med bots down first, either with EMP grenades (knocking them out for 3 turns after upgrading my artifacts) or using Bormin’s charge ability, but this risked triggering the other npcs around him. There are a lot of tactics to think about in Mutant Year Zero, and just because a tactic worked the last fight, doesn’t mean it will work again the next. This really kept the gameplay dynamic for me as I played beyond 20 hours and I never got bored of it, which is very rare for me!

Overall, I gave the game a 9 out of 10. Mutant Year Zero: Road to Eden stands out amongst the turn-based XCOM-style games by giving you the ability to stealth around the map, scouting positions of the enemy and working out the best angle of attack based on your party’s mutation abilities. The RPG elements and great story really had me sucked in and I never got bored of the gameplay loop, which is a rarity for those that know me. I highly recommend giving this a go if you’re a fan of XCOM, Phantom Doctrine or Phoenix Point. Below is a 25-minute gameplay video of the introduction to the game to see for yourself.

This review utilised the Xbox version of the game with 24 hours of gameplay. Mutant Year Zero: Road to Eden is available now on Steam, PS4 and Xbox One.