“My Friend Pedro’s high energy action and speed is what makes it truely Bananas.”

During my first run through of My Friend Pedro, my initial thoughts were that it wasn’t as Bravisimmo as it was made out to be. But after my second run my entire perspective of the game completely changed. My Friend Pedro, to put it simply, is Bonkers. Slowing down time may be the go-to mechanic of this platformer-like shoot ‘em up but its high energy action and speed is what makes it truely Bananas.

Speaking of bananas, this is the first thing you see, and it talks. The banana is your friend, Pedro. If you’re confused, it doesn’t matter. This is how your character wakes up at the beginning of the game. Unaware of who you are or how a banana is even talking to you, Pedro leads you on the chase to take down multiple targets who seem to also hold a target on you. The reasons for this don’t really matter as the action packed gameplay distracts you from remembering there even is a story, if you can call it that.

The main objective is very simple. Shoot everyone and try not to die. But make it look extremely cool. And do it quickly. The way the levels are designed let you get creative with your kills and really shine during the last half. Incorporating jumping, swinging, parkour-like stunts and even skateboarding lead to some truely satisfying and memorable moments. Even if memorable means you just ollied your way through a window and blew two separate brains out at the same time. Followed by kicking a body part towards a third, knocking them out. However it’s the main mechanic that puts the cherry on top of this Banana split sundae. 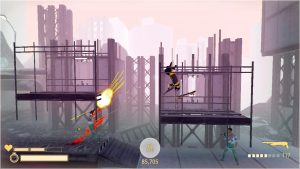 It’s called Focus and most of us already have a grasp of what this is. It’s the slow-motion bullet time effect we’ve seen in movies like The Matrix trilogy. In focus you can easily flip over obstacles, dodge bullets and have an easier time acing those perfectly timed kills. It makes all of these movements flow with ease. Out of focus however is a different story.

I found jumping and running felt a tad clunky if you’re playing like a regular platformer. Which I was doing a lot of during my first playthrough outside of focus. It was a slower safer run so I could constantly be aware of my surroundings while trying to execute the perfect kill. The character model physics in particular made it feel like I was playing an old Adobe Flash game. Turns out I wasn’t far off the mark either. My Friend Pedro is based off the old Adult Swim Games Flash game MFP: My Friend Pedro from 2014. This is what brought upon my initial first impressions. At first the gameplay felt sluggish and the focus ability was cool but it didn’t feel like a good balance. I eventually learnt that relying too heavily on Focus was a big no no and my balancing act was to blame. And to move faster than a slug. 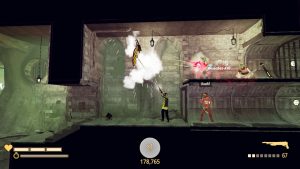 It’s not all about pulling off cool looking moves and kills, it’s also about how fast you can do it. Essentially you’re competing against your own personal best and others around the world to be on top of the leader board. Using too much focus will increase your run time which in turn affects your overall level rating. For a while there it was no surprise my average score was a C. Balancing between normal timing and focus is key. For a lot of my second run I wasn’t focused on making focus a priority. It’s all about quick switches back and forth to make traversing through each level faster and more fluid. I began to also only use focus if there more than 2 enemies. Doing so eventually brought my rating up to a solid B and lead to a more enjoyable time in the game. But even for Normal difficulty, also the easiest you can choose, it felt like a challenge to even get an A. It really makes you want to go back and keep practicing to “git gud.”

This violent ballet also comes with a killer soundtrack. Its electro sound matches beautifully with the industrial setting and action fueled gameplay. It once again reminded me of The Matrix movies and their perfectly choreographed action sequences. A beautiful treat for the eyes and ears.

Big things come in small packages and My Friend Pedro is a small game that delivers big results. It’s creative, surprisingly competitive and beautifully violent. While it is a short game that lacks story substance, it does somewhat makes up for it with its high replayability and fun gameplay.

My Friend Pedro is out now on Nintendo Switch and Steam and I give it a 8.5 out of 10.