“Looks aesthetically amazing, is very rewarding and straight up fun in my books.”

Before it’s launch, NBA 2K20 had some different more negative hype towards it. Labeled by some in the community as “full of gambling” I must say this isn’t entirely true. It does harbour luck based loot mechanics and micro-transactions, the latter I’ve never been a fan of. But NBA 2K20 also tells a story like 2K hasn’t done before and opens the doors to a wider NBA 2K audience. All while keeping it about the passion for the sport itself.

NBA 2K20 offers three main styles of gameplay which all contain multiple game modes, including the first ever appearance by the WNBA. But the headlining mode for this year is MyCAREER. It’s the same “started from bottom” journey we’re all too familiar with. But it’s execution has been given the artistic treatment. LeBron James and Maverick Carter along with their content company SpringHill Entertainment have teamed up with 2K to tell a MyCAREER story unlike any other. “When The Lights Are Brightest” is a cinematic narrative that opens up your journey via some lengthy cutscenes and minimal gameplay.

Before beginning your origin story, you obviously build your own character from scratch but you can also scan your face into the character build via the MyNBA2K20 app. My assumption that this technology could work on a phone was the complete opposite to the reality. After many many attempts in very well lit areas, I couldn’t get my face to scan at all. Luckily I could get my player to looks just like me the old fashioned way. Just a little more handsome. 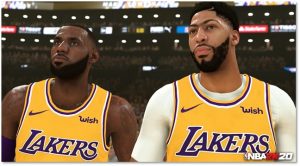 From young college student on the basketball team to big time superstar, you’ll take risks, make choices (some scripted, some not) and learn how these decisions will affect the relationships you have on and off the court. But in the end, outcomes don’t exactly matter. Whether you win or lose a game, the story will continue on. The only thing that truely matters is your own performance. During your rare moments of gameplay you also learn how to play as a solo character instead of a whole team. This sometimes acts a tutorial mode to get your head around all of the MyCAREER features you gain access to following the cinematics. Although you only play as one person, there’s a lot more pressure on you to perform your best and stand out. If you fall behind, people will notice and your reputation will be at stake. The narrative takes a few hours to get through and isn’t absolutely necessary to complete. It’s also cutscene heavy so those who just want to jump straight into the action should skip it. I wouldn’t exactly call it a moving story arc but if your wanting a different form of story telling within an NBA 2K game than give up the time to play through “When The Lights Are Brightest.”

Along with past and present NBA all-stars, “When The Lights Are Brightest” also stars Rosario Dawson as your college advisor and Idris Elba as your coach. It’s unfortunate it didn’t also go with a gender diverse storyline by also giving you the option to play as a girl. It’s understandable as to why since all of the acting in “When The Lights Are Brightest” were done using Motion Capture which would of meant twice the work. But with the debut of the WNBA in a 2K game, one can only hope that next year a female basketballer could get her own MyCAREER story.

MyCAREER carries on after the narrative and centres around The Neighbourhood as its central hub. This returning feature allows online players do everything they need to do to get game ready. They can practice on the courts against other online players, shop for new swag and go to the gym to increase their stats for the week. You can also increase stats by using Virtual Currency which can be expensive. But, in my opinion, unfortunately there’s a way to increase your Virtual Currency to help buy those hundreds of stat points you want to delegate so badly. Virtual Currency can be bought using real currency. Which would obviously fast track your players stats instead of putting the hours into the game. Call me old fashioned but it’s an aspect of the game, or in any game for that matter, that I’m not overly comfortable with. Unfortunately we live in a video game culture where titles like NBA 2K20 will always have micro-transactions.

Virtual Currency spending is also found within MyTEAM which is also my favourite game mode. MyTEAM once again uses a trading card like system where you build a deck of your best players to use in different basketball modes. Even if you don’t know a single thing about basketball, it will auto lineup the best players available in your collection. You can also evolve certain cards by doing challenges and even sell them for a small or huge profit on the Auction House. The Auction House uses MyTEAM tokens though instead of VC. However VC can still be used to buy card packs. Again, it’s an unfair advantage. Especially when MyTEAM can also be multiplayer heavy. Card Packs are obviously based on luck but if you spend enough money, you’re bound to recieve the best cards on offer in each collection. MyTEAM does include single player games that are the same as what’s on offer online. From 5v5 to a shorter more casual 3v3 game of Triple Threat, MyTEAM is one of the more rewarding modes within NBA 2K20. 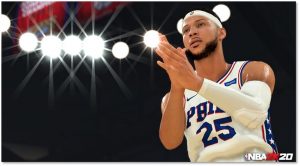 Triple Threat for example comes with constant rewards and are a lot shorter than full length 5v5 matches. Not to mention the purple Triple Threat court looks AMAZING! There’s also multiple challenges across every game mode as well as schedule events that give out special rewards. Of course these rewards go straight back into your MyTEAM progression. Honestly though, I’ve found myself spending more time here than working on my own basketball career over in MyCAREER. And he isn’t doing the greatest for it.

Last but not least is MyLEAGUE which allows you to play through entire seasons of basketball. But I want to highlight its feature of the WNBA. This is the first time it brings womens basketball to 2K and they absolutely bring it to the court. The team also worked hard in giving these women their own moves on the court. By using the same motion capture for the mens teams and the cinematic narrative, they aren’t just copying and pasting animation sequences and gives it the same amount of authenticity. Hopefully next years NBA 2K spreads the WNBA across the entire game and not confine them to one mode.

Never a fan of heavy hip hop soundtracks either, this soundtrack also surprised me with a mixture of different sounds to suit my tastes. Rock, pop and straight up hip-hop can all be found on the massive 50 track line-up with more expected to come. The aesthetic was also major eye candy for myself. Especially all the purples and pinks within the MyTEAM menus. The user interface is super clean and extremely user friendly. It took little to no time to find what I needed. In case you’re wondering I needed some major control pointers. However you don’t need many fancy moves to take down the best of the best. Believe me.

NBA 2K20 is still about basketball but unfortunately it’s also about those annoying micro-transactions. Aside from my hatred for pay-to-win, NBA 2K20 looks aesthetically amazing, is very rewarding and is straight up fun in my books.