IF the NBA has added anything to pop culture these days, it’s two things, shoes and Hip Hop. Well, today it’s need announced that NBA 2K23 will be adding some local Aussie hip hop music to their soundtrack this year, adding to their pedigree of legendary soundtracks by NBA 2K23 adding local Aussie Talent.

Today, NBA® 2K23 the latest iteration of the NBA video game simulation and Universal Music Australia announced a special partnership with Australian recording artists; Chillinit, Sahxl and Barkaa. The exciting collaboration titled Court in Session is a unique musical performance series that puts Australia’s best hip-hop artists alongside the beats created from the self-expression of the basketball players within the basketball video game, NBA 2K23.

For over 20 years the soundtrack has become an annual ‘greatest hits’ of today’s top hip-hop artists, and today the brand further substantiates its footing in the local Hip Hop scene with the launch of its new cultural platform, Court in Session. 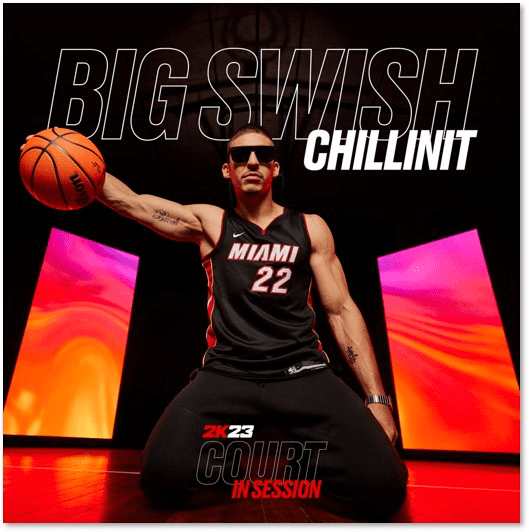 The music videos have been directed by acclaimed twice ARIA-nominated music video and commercial director, Gabriel Gasparinatos. Gabriel has recently directed films and commercials for Adidas, Beats by Dre, Spotify, Google and the A-Leagues.

Gabriel said, “It’s been so fun getting back to my rap video roots on this project, it’s highly technical with massive LED screens, an enormous lighting set and motion control rigs but working with DOP Tyson Perkins and bolt operator Max Pepper from Cinoptix on it has been super rewarding. Pulling inspiration from 2K gameplay highlight reels and modern rap clip sensibilities we had a blast pulling these individual videos together. It’s so cool to see such exciting, global brands willing to invest in & give a platform to Australian hip hop artists.”

NBA 2K23 offers an authentic and true-to-life gameplay with best-in-class visual presentation, improved player AI, up-to-date rosters and historic teams, the game has never felt more real and complete than it does in NBA 2K. The original music from Australian artists will also be available via all streaming platforms from today.

“We are thrilled to be partnering with such great local talent and to be able to be facilitators of taking them to a global audience through our game,” said David Kelley at 2K Games. “NBA 2K has always prided itself in being central to Hip Hop culture and with Court in Session in collaboration with BRING, we are proud to have created a platform that majestically combines our game, Hip Hop and basketball in a truly authentic & ownable way to appeal to a new audience.”

One of the most dominative names in the Hip Hop community is Sydney rapper Chillinit, who has thrived on building his career through social media platforms to become one of the country’s most prominent rappers with his 420Family. With an ARIA Gold album, two Double Platinum and eight Gold singles under his belt, ChillinIt is one of Australia’s most decorated artists.

The Court in Session campaign was extremely attractive to the young rapper who has always promoted his music in a non-traditional forum.

“I have always been a huge fan of the NBA and the video game, as a kid I would play for hours, then fast forward years later to see my own billboard within the game while I play with my own little brothers is surreal.

“It’s been such an honour to work with the team at 2K and to be a part of a game that I genuinely love and grew up playing. I can’t thank the team enough and can’t wait to welcome you all to the 2K with

Also joining the collaboration is 19-year-old vocal prince, Sahxl who has been primed as one of Australia’s next breakout stars, teetering the line between R&B and Hip-Hop with brazen conviction, honest story-telling, and undeniable melodies.  At the age of 13, Sahxl caught the attention of APRA Billion Stream award-winning producer Khaled Rohaim (Rihanna, Polo G, The Kid LAROI, OneFour) and has been steadily ascending since.

On the collaboration, Sahxl says, “When I collab with brands, it has to be authentic. I play NBA 2K all the time in the studio, so for me this project just made sense. It was a bit of a challenge producing the beat with my producer Sid Mallick, as it was our first-time using basketball sound effects to put together a song, so it was a really different process. The final track sounded dope though, and it was fun experimenting with new experiences and themes to help this song come together. It was a pleasure being invited!”

Hailed “the new matriarch of Australian rap” by GQ Magazine, Barkaa is a Malyangapa, Barkindji woman from Western New South Wales, now living in South West Sydney on Gandangara land. Music to Barkaa has been part of her journey to express herself, the truth and issues impacting First Nations people. Since her 2020 debut single, “For My Tittas”, Barkaa has swiftly climbed to the top as one of Australia’s most respected voices, named as one of the top rappers in the country by triple j and Red Bull respectively.  Most recently, Barkaa was announced as part of The #YouTubeBlack Voices Class of 2022, appearing on billboards across Times Square and Los Angeles, Barkaa’s star power is fast rising.

“The song “Ball On ‘Em” is a track that I wrote that was intended on amping people up and a shout out to haters that they couldn’t stop nothing. Referencing brother Patty Mills this is dedicated to him for defying all odds, somebody we as a First Nations community are constantly inspired by and in awe of. The lyric “pass it to them young ones, they gon’ run the game strong” is saying that this is and has always been bigger than us… We got to pass that torch over to our youth when our time is up and know that our future is in good hands, I’ve got to give a massive shout out to Rhyan Clapham (DOBBY) for going ham on the beat, we had so much fun in the studio working on this track,” said Barkaa.