Nelke and the Legendary Alchemists: Atelier’s of the New World Review

“As someone who isn’t the biggest fan of city simulators, I had to learn to power on through the stress of balancing my towns needs so I could find out the mystery of this legendary tree”

Take a town building simulator, include the stresses of multitasking & add in a storyline with an ensemble of cute, bubbly characters and you get Nelke and the Legendary Alchemists: Atelier’s of the New World. The latest title in the niche Atelier’s series by Koei Tecmo came with quite the learning curve for me. As someone who isn’t the biggest fan of city simulators, I had to learn to power on through the stress of balancing my towns needs so I could find out the mystery of this legendary tree my character was on a quest for.

Meet Nelke, an aristocrat who has a keen interest in legendary ancient Sage Relics. However, Nelke learned early on that the power of alchemy that comes with said Sages wasn’t her strong suit. Growing up to be a government official, she still yearns to search for them, in particular The Granzweit Tree. Rumoured to be on her fathers land, he allows her to search for it only if she governs the town of Westwald and helps make it blossom. 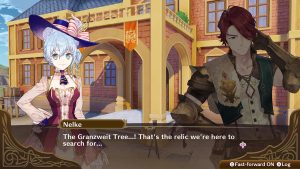 Although I was expecting to go on a JRPG-like adventure at the same time, I was disappointed to find that town building was essentially 80% of Nelke’s gameplay. But that disappointment soon fell away as I slowly started to, dare I say, kind of enjoy helping this small town thrive. The story progresses as you complete certain tasks in each chapter. Instead of “go talk to this person” or “clear this dungeon” as I was sort of expecting, it was more so reaching sales targets or building certain structures.

As the town of Westwald grows, it starts to attract the attention of alchemists from other worlds who want to move into town. They may also familiar if you’re a fan of the other Atelier titles. The addition of these alchemists helped since I needed to make money to help make Westwald grow and they knew how to synthesize items for me to sell. Alchemists aren’t only useful for crafting though as I was able to hire them to work in my stores as well as gather crafting materials. This isn’t the only interaction you get with them, they can accompany you on Investigations and develop a level of friendship with you which unlock certain events within the game.

Developing the town was all easy at first, however as it grows, more and more alchemists arrive and the expectations as town leader starts to increase. For me this is where the games difficulty truely kicks in. Along with tasks set out in each chapter, town residents have requests as well. It took a while for me to learn to only focus on the more important jobs. Juggling items that I needed synthesizing also required me to make sure I had gathered the items for each recipe, which was a whole other task at hand. And sometimes, that didn’t always happen. Usually because I was too busy focusing on another request or a research task. Figuring out what I needed to synthesize one item while having to make sure I had enough of the the same crafting material for another required a lot of brain power. Multitasking is absolutely vital the further you get in the game, which was no easy feat for myself.

Trying to juggle all the things later on was almost headache inducing. It required multiple breaks from the game, coming back each time with a calmer mindset which also helped me devise a new plan of action. There’s going to be minor and major bumps in the road ahead as Westwald becomes larger. A well thought out strategy is an absolute must. Multiple save files also became handy too if I wanted a do over. 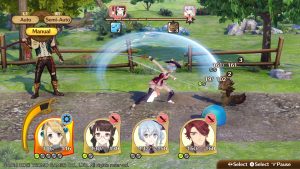 Luckily the other 20% of gameplay regularly allowed me to take a breather from all this stress. The turn-based JRPG battles are still here just like in other Atelier titles. You get to take part in these during Investigations through surrounding areas of the town. Like other JRPG’s, the encounters happen at random. However I thought these battles were very basic at first. It’s not until you reach more difficult enemies later on and level up your characters that the fights have more depth. Characters eventually bring more abilities to the table allowing for more interesting battles rather than just spamming basic attack commands until everything is dead. Unfortunately there are no weapon or armor customization for your characters either which was a bit of a let down. Investigations also allow you to gather items for crafting and required me to be strategic on which of the two I should focus on.

The whole process of town building, organizing, selling, visiting residents, researching, investigations becomes very rinse and repeat. It may have had a repetitive feel but there was always something different I was focusing on each time so it wasn’t particularly a bad thing.

Will all of this going on, I sometimes felt the gameplay, mainly in regards to the town building, overshadowed the story. At times I even forgot about the Granzweit Tree since I was too busy focusing on my towns problems. However it’s still easy to follow with its cutscenes, mainly happening between chapters or after certain events. For us gamers in the western world who don’t understand Japanese, there’s a lot of reading as there’s no English voiceover option. However, I did prefer the Japanese spoken dialogue since the game couldn’t be ruined by poor english voice dubbing which usually ruins the tone of most JRPG’s. It’s vibrant and colourful art style didn’t disappoint either and included an always charming soundtrack. These were a treat for the eyes and ears, even if my brain was occasionally having a hard time focusing on all the responsibilities of a team leader.

Nelke and the Legendary Alchemists: Atelier’s of the New World is a very niche title so it won’t be for everyone’s tastes. But if you’re a fan of strategic town Sims and cute Japanese aesthetics, I’d recommend this game for you. The turn-based battles truely helped me enjoy this game more than I had expected early on. Mixed with the addition of it’s storyline, it gave me a good reason to want to progress and be the best town leader I could.

Nelke and the Legendary Alchemists is available now on PC, PS4 and Nintendo Switch I give it a 7 out of 10.