Borderlands 3 came out no more than 2 weeks ago and already we have news on some fresh new content coming this October. The Bloody Harvest event is the first of what will be many free events for Borderlands 3. Bloody Harvest was talked about in more detail over on the first Borderlands Show with Creative Director, Paul Sage, where they also announce Borderlands 2 VR’s release for Steam on October 22. You can watch the full episode below.

During the spooky event, vault hunters will come into to contact with Haunted enemies, whom you’ll be able to access the event-specific map through. Doing so will also give you the terror debuff, leaving you partially blind and almost useless when it comes to using weapons. This already doesn’t sound too rewarding, but this is how you are allowed access into the event. Hectoplasm is collected from the encounters, which can be traded into Sanctuary 3’s new temporary NPC, Maurice. Once you’re allowed in you’ll face Maliwan goons, Rakk-O’-Lanterns and then wrap up your spooky battles fighting up against Captain Haunt. Does he sound familiar?

Captain Haunt is the spooky undead version of Captain Traunt. And he’s apparently a lot harder than his more alive version. But all of the creepy scares are worth it for some spooktacular loot! An Echo skin, trinket, vault hunter skin and global weapon skin are up for grabs. There’s legendaries to farm too, including weapons, a shield and grenade mod with some including the terror debuff. 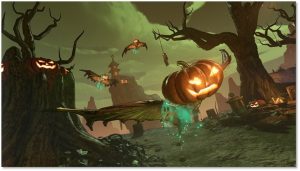 Watch The Borderlands Show for even more coverage as well as for a brand spankin’ new SHiFT Code for Borderlands 3.