THE second portion of DLC to come with Season Pass 2 for Borderlands 3 is scheduled for release on April 8, almost a month later than its original launch date. Director’s Cut will come with plenty of end-game enhancing content and behind the scenes goodies. Following last months look into the DLC in further detail, 2K announced more information today revealing more about the Director’s Cut’s new reward system.

Two different reward systems will come into play for those who own the Directors Cut, Vault Cards and Diamond Keys. Vault Cards were mentioned in the Director’s Cut’s first reveal but nothing more was known about them apart from the rewards on offer. But we now know that Vault Cards work as an indefinite daily/weekly challenge-based system where as you complete challenges/earn XP, you’ll fill up a progress bar. This is a similar reward system to that of the seasonal events that have taken place in-game. Each time you fill your progress bar, you’ll earn a Vault Card Chest which will contain anything from gear, cosmetic items, Eridium or a Vault Card Key. Keys will let you unlock Legendary items associated with said card. 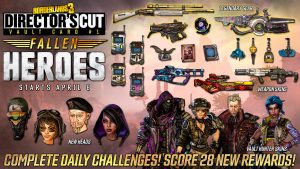 Vault Cards types will change over time and include different types of gear to allow for more variety and replayability. The first Vault Card, Fallen Heroes, was also revealed in the new rewards guide on the official Borderlands website as well as a list of rewards which can be find below.

Diamond Keys are similar to Gold Keys but don’t require scouring the Borderlands socials for keys. They’re earned in-game however exactly how or where haven’t been mentioned in the news release. But just from reading how it works, it’s definitely way more epic than opening a Golden Chest. Diamond Keys unlock and entire room found undernearth the bridge on Sanctuary III called the Diamond Armory. This room houses 3 large treasure troves locked behind 3 shutters, each containing different gear types. Unlocking these shutters allows you to choose one Shield, Weapon and Grenade.

However, there’s a catch to all of this. You’re only given a certain amount of time to browse and choose the loot you want before everything is locked away again. The amount of time given hasn’t been mentioned but by the looks of the number “296” generated in the middle of each wall, we might be getting a semi-ample amount of time. This is just a theory but 300 seconds, or 5 minutes, seems like a lot of time. But when broken down, this means you’d get roughly 3 seconds to look at each of the 80+ items of gear before the shutters come down. Unless you know exactly what you want and know what you’re looking for, you’ll probably have a stressful time deciding during the first few visits. 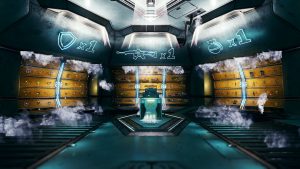