IF you mastered the Jordan Challenge in NBA 2K11, you’re going to be up for even more of a challenge in 2K23. You can play out Michael Jordan’s most historic moments once again when NBA 2K23 launches on September 9. But the team aren’t just remastering his old iconic moments.

As we’ve previously reported, the Jordan Challenge is making a return to the NBA 2K franchise. A whopping 15 iconic moments will feature in the Challenge, 5 more than in NBA 2K11. All of which have been completely rebuilt from the ground-up. 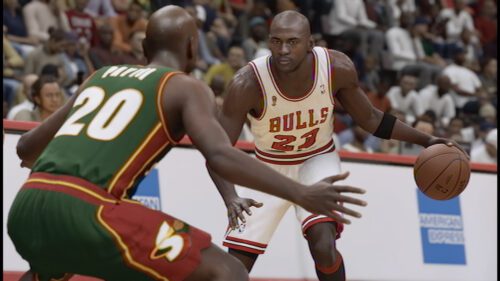 “Our team took everything into consideration when constructing this game mode; the arenas, the players, the uniforms, the broadcast, and the play style of the era have been accounted for in an effort to give fans a truly authentic and unique playable Jordan experience,” said Erick Boenisch, VP of NBA Development at Visual Concepts.

When you’re reliving Michael Jordan’s most iconic moments, there’s only one way to do it. And that’s with an 80s/90’s television set. But because that’s 99% impossible to do, we’re given an intricately designed video filter system. So it’s going to feel like you’re actually watching them when they happened back in the day. Right down to the 80’s and 90’s broadcasting logos, graphics and font.

You’ll also hear the very same announcers you would have heard during these iconic games. The team brought in the official Bulls announcer from the 90’s, Ray Clay, who recorded an entire PA announcer set for the Jordan Challenge. Other greats from the NBA community were also brought in for pre-game interviews, including Jordan’s opponents, coaches and commentators from back in the day.

The feel for the game has also been matched to the era. Certain rules and gameplay aspects, like heavier focus on post and mid-range game and tighter transitions, have been added for more authenticity. Along with this, NBA greats like Magic Johnson will have era-appropriate jump shot, layup and dunk packages, including Magic’s signature no-look passes.

The nostalgic first look at the Jordan Challenge can be found below.