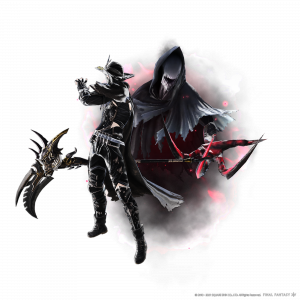 FINAL Fantasy XIV Online Director and Producer, Naoki Yoshida created plenty of hype as he entered the stage at the start of the opening keynote. Yoshida, aka Yoshi -P, hosted the presentation which kicked off Day 1 of the 2021 Final Fantasy XIV FanFest which was held digitally this year due to COIVD-19. Instead, it’s been broadcast live from Tokyo to Final Fantasy XIV’s Twitch and YouTube channels.

Yoshi-P was dressed head-to-toe in a never-before-seen armor set while also weilding a scythe. He eventually revealed that this was the 2nd new job being introduced in Endwalker called the Reaper.

Beginning at level 70, Reaper is a fast-paced mellee DPS who wields a two-handed Scythe weapon in combat. Reapers also call upon an avatar from the void to fight side-by-side with them. They’re also able to channel void power through their companion.

Yoshi-P informed viewers that along with Dragoons, Reaper also have the Maiming sub-class. No job requirements are required to play as the Reaper, however you will need the Endwalker expansion as well as at least one job at level 70 or higher.

Reaper will also play a large part in the upcoming plotline for part 2 of the Death Unto Dawn patch. In the fight against the Warrior of Light, Xenos choses to change his job to Reaper. A first look at the Reaper in action was also shown during the keynote, giving off the same dark, edgy vibe as Dark Knight while also looking like a very fast-paced and funclass to play as.