ACTION-platformer OlliOlli World isn’t due for release until early next year, but some of the tracks featuring on the games OST have been revealed. The Golden Joystick Awards 2021 were held earlier this week, which is where the games OST early reveal took place. The 39th Golden Joystick Awards, which can be watched here, revealed 8 out of the 32 tracks which will feature on the OlliOlli World soundtrack. 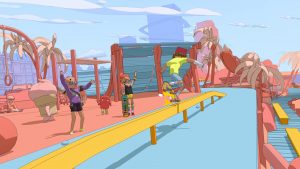 Matching with the games skateboarding theme and chill vibe, the tracks are a range of chill and up-beat electronic sounds from the likes of Fardust, Nikitich and Adam Swim to name a few. What’s revealed so far of the OST is also now available to listen to on Spotify.

“Music has always been a key component in OlliOlli games as it constitutes an integral part of the flow-state gameplay of the series”, explains Simon Bennett, Co-CEO at Roll7, who also announced the Best Audio award during the show. “We are thrilled to share these captivating tunes created by outstanding independent musicians from around the world.”

OlliOlli World is the third installment in the OlliOlli series, launching across all platforms in Q1 2022.