“New Super Lucky’s Tale delivers so much variety that it’s beating out my other favourite platformer titles.”

Every 3D platformer I’ve played over the years have all had the same basic concept. Collect all the coins/all the items, letters, pages, etc. etc. Don’t get me wrong, platformers are fun but after a while the concept becomes less interesting. Picking up New Super Lucky’s Tale though was a breath of fresh air. Does it fall far from the platformer tree? In regards to collectables, no. That’s a given. But the rest of the gameplay delivered so much variety that it’s beating out my other favourite platformer titles.

New Super Lucky’s Tale is the latest in the Lucky’s Tale series by Playful and follows the adventures of Lucky the fox. Along with his family and neighbours, Lucky’s been on the run for years with the Book of Ages after Sorcerer Jinx tries to steal this magical artifact. Of course they couldn’t run forever from Jinx and his clan, aptly named “Kitty Litter.” When confronted, the Book Of Ages is used against Jinx, scattering pages from the book in the process. This opens a portal sending little Lucky on a wild adventure through the Book of Ages to retrieve the pages that were lost. 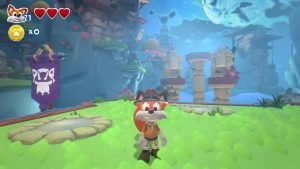 What I expected was a regular looking 3D platformer that felt generically the same. This is what I got to begin with during my first level. The next level however was a 2D side-scroller. I’ve never come across a 2D/3D hybrid in the past and this became a real winning point for me. Just as I thought it couldn’t get any better, I stumbled upon side levels which introduced puzzles and a labyrinth like mini-game. The latter I wish had incorporated the Nintendo Switch’s motion controls to guide the ball. There’s also a couple of levels with a top-down perspective and some inspiration from Temple Run as well. Oh, and a level of just carnival games. By this point I was having a lot of fun bouncing, burrowing and exploring every corner of these colourful environments. Incorporating multiple gameplay styles kept everything feeling fresh and stopped me becoming bored with the same type of levels over and over again.

There’s no true order in which levels are completed either, and early on you don’t even have to finish all of them to progress. Different numbers of pages unlock boss fights in each world so progression early in the game requires little effort. These fights are fun but didn’t feel overwhelmingly challenging until I was close to finishing the story. Whilst lacking challenge they were still mechanic heavy and designed well. But I feel that this is a conflicting opinion. As much as I enjoyed the fights for the most part I also wish there was more direct interaction with the boss at hand. This is in regards to both my attacks and theirs. Fights had a lot more to do with dealing with smaller enemies and dodging hazards within the space. While the boss looked over and dealt damage on the odd occasion. The final boss however was, as always, the bread winner overall. Jinx put up a fight that tested my patience over and over again. Feeling ultimately defeated, I walked away overnight and then came back to beat him in one go. 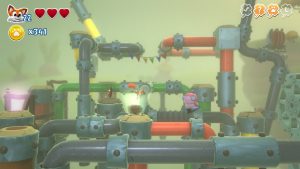 While completing every level isn’t a requirement I highly recommend giving them all the old college try. Not only do they differ in gameplay but are also set in a variety of different environments filled with secrets. Some of these pages are very well hidden and looking in every corner of the map won’t always cut it. Finding all of the pages also unlocks costumes to purchase so there’s a bonus incentive of completing as much as you can. The story spans across 5 colourful worlds filled with cute NPC’s and some not so cute enemies. And surprisingly none of these worlds involved large bodies of water. Is it a true platformer if it doesn’t include a water level? No, but we’ll let this one slide. Whether the Nintendo Switch is docked or undocked, graphics look incredibly smooth and for the most part perform well. A part from the odd occasion where framerate slightly skipped.

Taking Jinx down isn’t exactly where this tale ends. Finishing the story opens up an end game world of 16 extra levels. Your thumbs will get a workout playing through new labyrinth puzzles, brand new levels and surprisingly includes hard modes of my favourite boss fights. The ones I didn’t find overwhelming. Only this time I actually kind of broke a sweat. An extra 16 levels may not seem like much but this is where the games challenge truely peaks. The main story component is a bit of a walk in the park so it was nice to feel like I was being challenged and no longer hoarding extra Lives. 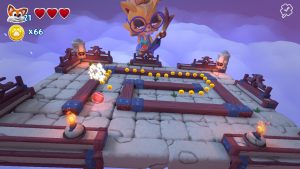 With it’s multiple gameplay options it’s safe to say New Super Lucky’s Tale is my new favourite platformer for this generation. As well as another outstanding release for the Nintendo Switch.

New Super Lucky’s Tale is now available on Nintendo Switch and I give it a 9 out of 10.