Ah the ports just keep coming from the fated Wii U console to the monsterously successful Nintendo Switch. Following the growing trend of ports while we wait for game designers to give us something new in Super Mario Bros. U Deluxe, a platformer that while may have been a great re-invention for the Wii U, turns out to be a superb successor to Super Mario Odyssey on the Switch. There are dazzling levels that are the perfect amount of time for on the go gaming as well as easily adjustable multiplayer mode with joy-cons. The graphics run at a beautiful 1080p on the Switch and with new characters and the addition of New Luigi U, this really is the Mario filler we need till the next big original Mario game is released.

Having the traditional 2D Mario game style is something of a change from recent games like Odyssey and Galaxy, with the sheer focus of this title feeling like it is a spiritual successor to Super Mario World. You can play as the usual Mario or Luigi, although this time around the additions of Toad, Toadette and Nabbit. Playing as some of these characters does change the mode with Toadette being Easy and Nabbit being super easy. Now when I say super easy, I mean so simple you can easily run through each level and collect any of the items and coins you have missed and to be honest unless you hand the controller to a child, this is the only reason to use this mode. The character design is cool and it is fun to play as a non traditional Mario character, it does bear on the WAY too easy side of things. 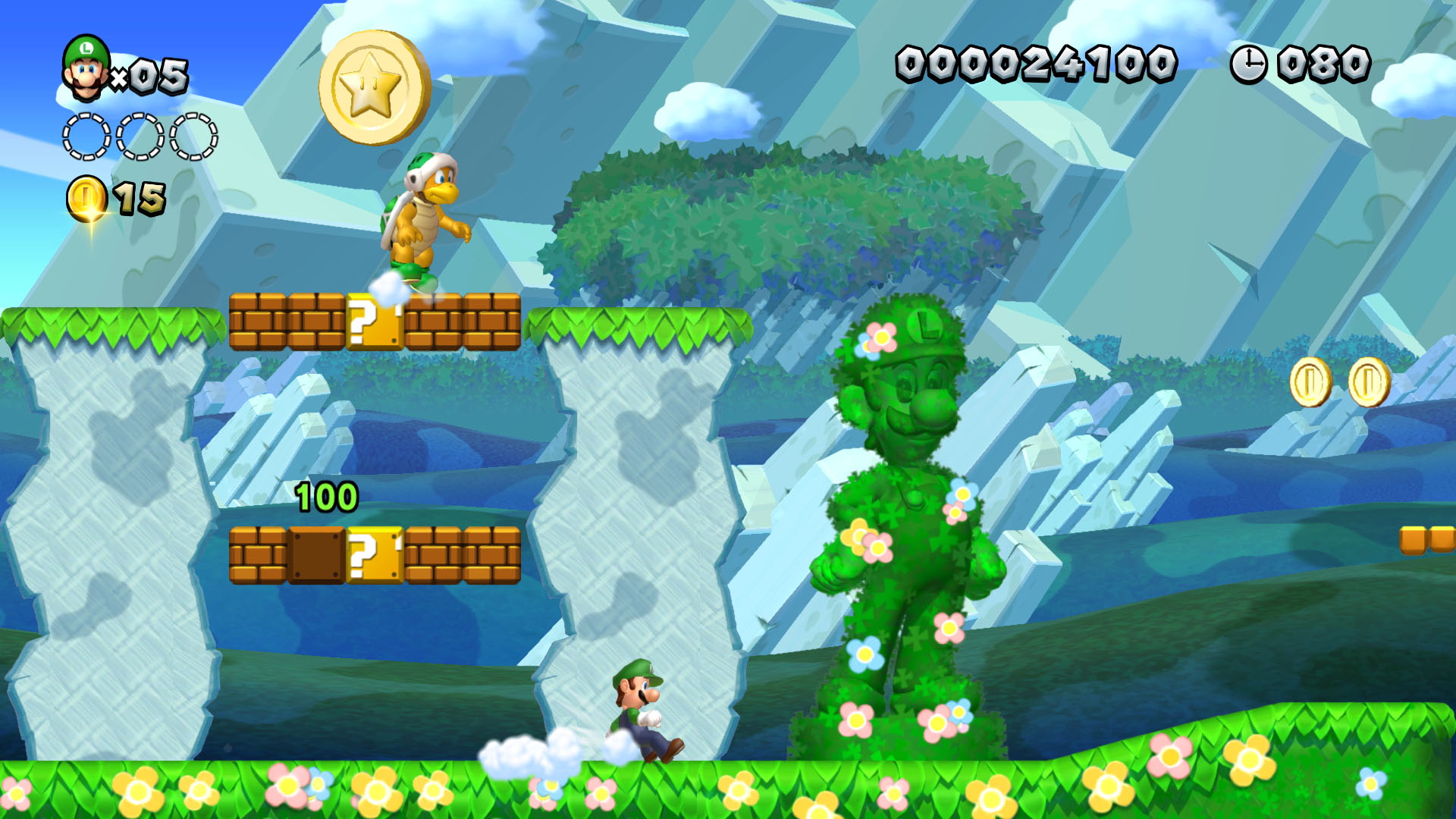 Playing New Luigi U is the more challenging mode out of the two titles and really does required players to show what they have got in terms of skill and precision. Definitely do not start out in this mode if you are a newbie to the series as it may prove to be a bit to challenging . Once you have mastered Super Mario Bros U, this is definitely a great extension that gives the game longjevity and something to come back to once you are done if you are in need of some more Mario (well Luigi) goodness.

The super guide is back as a feature in this title, after proving to be a controversial addition to the Wii U addition, if the game can see you struggling to make it through some of the more challenging levels, it will ask you if you want Luigi to show you how it’s done. The game will then give you an option to replay the level or simply keep going with that level unlocked so you can easily move onto the next one and forget the whole horrible thing ever happened (well at least that’s what I told myself to get through some of the challenges!)

Challenging it is! The game does not hold back on making it difficult, it is a trend that we also saw with Donkey Kong Country : Tropical Freeze and was also a large part of what made that game so appealing and gave it the longjevity that is shared with Super Mario Bros. U Deluxe. One thing that did surprise me was the boss levels, they are so painstainkingly simplistic that a simple jump, avoid and jump with rise and repeat 3 times is all that a boss needs to be defeated. Starting out this was ok, but at the game goes on it was surprising that they stuck with this formula as it appeared anti climactic, particularly when given the calibre of a lot of the challenges in the game. 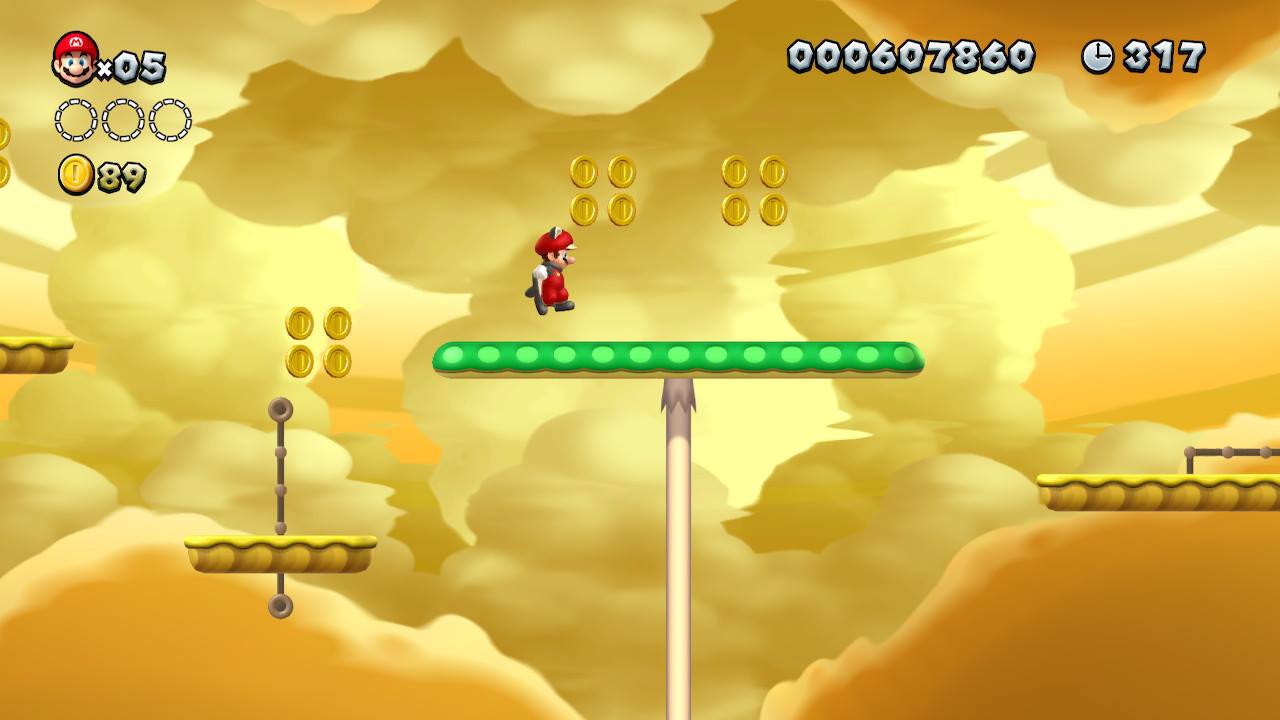 Multiplayer this game is a lot of fun, I as fortunate enough to talk my other half into picking up a joy con and joining in the fun. The gameplay was fantastic on the big screen in docked mode, however when we Switched (ha!) to handheld and played tabletop the screen size really let the game down. It was difficult to see who was who and so in an effort to avoid any fights and arguments we docked the Switch and kept playing. Playing in solo mode in handheld was an absolute dream, this game has come everywhere with me and the levels are just long enough to be a viable mobile title.

While the game doesn’t offer anything new apart from two characters, it is complimented by a substansial graphical upgrade on the Switch and the decision to keep it at 1080p in docked mode is a great one. The lack of new content is a little bit of a deterrent for those who have played the game previously, however as stats show not too many people owned the Wii U console, it is pretty safe to say there are still quite a few people out there who will pick this up.

New Super Mario Bros. U Deluxe may be a mouthful of a title, but what it lacks for in finesse it makes up for with exciting gameplay, deep and beautiful colours, an upgraded graphics system and classic Mario gameplay that gamers have enjoyed for decades. Now being able to have the best version of this character on the go is an essential to any Switch collection. The addition of New Luigi U is a welcome one and really adds to the longjevity of the game. The addition of Super Guide may seem an odd necessity but once you start playing you may just be grateful for its existence to help you get to the next level. That being said this game is a ton of fun wether played in single or multiplayer and is a true remined of how great Nintendo characters are.