MUCH to a lot of people’s delight (including our very own Nicco), 2K surprised Borderlands fans last week by announcing all all-new, well, New Tales From The Borderlands.

The title is being developed by Gearbox’s Quebec studio, and has been confirmed for an October 21 release date on PC, Xbox, PlayStation and Nintendo Switch. Instead of being a first-person shooter, it is (like the previous Tales From The Borderlands game) a third-person narrative adventure where the outcomes vary depending on player choices.

Ahead of its official unveiling I had the chance to view some gameplay capture (see below) and chat with the developers – and I really enjoyed what I saw.

Set about a year after the events of Borderlands 3, New Tales From The Borderlands is about three oddballs – Anu, her adopted brother Octavio, and frozen yoghurt shop owner Fran – and how they end up caught up in an adventure involving corporations, vault technology, and the zaniness the Borderlands series is well known for.

As the game opens, the Atlas corporation has established a space station for conducting research on a Vault Key they’ve found – at which point the Tedior corporation show up, attack the station, steal the key, and then the main story of the game kicks off.

The three characters have their own ideals – Anu wants a world where people don’t need to kill get ahead, Octavio wants to be famous, and Fran wants sweet, frosty revenge on the Maliwan Corporation for destroying her yoghurt store with a giant laser – and how they intend to achieve those goals looks to be an important part of the story.

I was really impressed with how the graphics had been updated, even since Borderlands 3 – they looked more defined and fluid, but still perfectly captured the rotoscope art style the series is famous for.

The new characters were great too – the voice acting was well done and the writing was great too. Fran in particular reminded me of the character of Pam from the TV show Archer, so I’m

One of the moments in the preview that really stuck out for me was a sequence where Octavio is trying to get past a guard – in the middle of a planet-wide war – and they end up in a high-stakes, winner-takes-all toy fight, smashing collectible figurines together like kids playing with Transformers – represented by a mini-game reminiscent of an arcade fighting title.

It was simultaneously ridiculous yet completely in keeping with Borderlands style at the same time, and I found myself grinning and laughing (in the best way) at the sequence and several others in the preview.

One of the big elements of the game is the immediacy of choice implementation, and the fact the outcomes aren’t always obvious at the time, either.

“I’m still discovering them and I’ve been working on the game for two and a half years,” he said.

Accessibility and making sure people can enjoy the game’s story has been a key as well, he explained,

“You can make them [the puzzles] as accessible and easy as possible – eg any input will work,” Frédéric said.

“We want to make it as accessible as possible, we want people to enjoy the story first and foremost.”

Gearbox Software production director James Lopez said the game had been developed with the assistance of some of the previous Tales From The Borderland team, even though this was the first internally developed Tales game.

He also stressed the game would be accessible to people who hadn’t played any of the previous Borderlands games too.

“We do a fair amount of onboarding… We hope all of our fans come back and we make some new fans,” he said.

Despite the preview coming from later in the game, I certainly had no trouble at all establishing who each of the three protatganists were and what their “thing” was, so I have no trouble believing that newcomers to the Borderlands universe will be able to jump in and enjoy the offbeat nature of it all without any issues.

Both Frédéric and James said making the game had been a rewarding experience and had loved watching it come together, from seeing the work the writers, actors and developers were doing coming to life, to seeing how particular elements of the game, such as the Vaultlanders toy combat minigame, evolved over the course of the title’s development.

While I haven’t played the previous Tales From The Borderlands game, I’m not a complete philistine and have played (and enjoyed) some of the previous main Borderlands games – so with that in mind, I’m really looking forward to playing this new instalment when it launches next month. 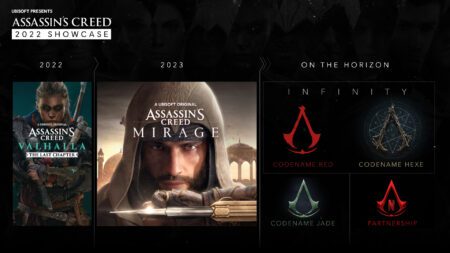