New Wonderlands classes have been revealed

2K are well known for slowly drip-feeding us details ahead of game launches. Last weeks Game Awards presentation was the beginning of Tiny Tina’s Wonderlands Dev Diaries which showcased a brand new trailer and highlighted some of it’s main characters. This week, 2K have revealed new classes as well as closer looks at environments, enemies and game mechanics as well as a new trailer. 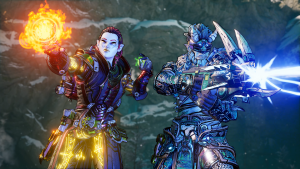 Before today, we knew only of two Wonderlands classes, Brr-Zerker and Stabbomancer. This Dev Diary entry has revealed two more classes for fans to get excited for ahead of the games March 25, 2022 release date. Spellshot is the wizard class of Tiny Tina’s Wonderlands, who can not only cast spells on their enemies but also transform them into a harmless Skeep. Clawbringer on the other hand is a Thor-like hammer wielding class with a Wyvern sidekick who fights alongside them. Clawbringer’s can deal hard hitting physical damage with their hammer, bring down fire and flames on enemies and buff their party thanks to their Dragon Aura.

Game mechanics revealed in the Dev Diaries are mostly the same as the Borderlands series. Online and split-screen co-op has been unveiled as well as the millions of guns and rarities they come in. Wonderlands damage types work almost the same but are different for the games magical setting. There are five elements – fire, frost, lightning, poison and dark magic. Similar to Borderlands, these will need to be matched with certain enemies depending on the colour of their health bar. 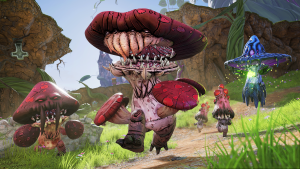 Rings/Amulets can be equipped to give boosts to different character/loadout stats and abilities. Rings work with your loadouts to buff skill durations, damage, etc. Amulets on the other hand gives characters a special effect ie. instant reload after a melee hit. Wards are probably the most unique mechanic added that’s different from the Borderlands series. Wards act as a shield when equipped, and according to the Devs, you should get one ASAP.

We also get to see a much darker side of the world of Wonderlands today with The Weepwild Dankness, The Fearmid and Mount Craw. The Weepwild Dankness is the dark and dank side of the forest, full of enemies like the ultra violent Shrooms. Mount Craw is high up in the snow covered mountains, where Goblins and Trolls live. Lastly, the Fearamid is where you’ll find the undead, emotionally dead and skeletons lurking all over.