Day 1 of the 2021 Final Fantasy XIV FanFest presented us with plenty of exciting information about what’s to come in the next expansion, Endwalker. But of course, lots of fans, including myself, were much more excited when we were presented with just some of the new areas waiting to be explored when Endwalker launches on November 23.

Director and Producer of Final Fantasy XIV Online Naoki Yoshida, aka Yoshi-P, hosted the keynote address which kicked off day 1 of the 2 day event which is being broadcast live from Tokyo. During the two-hour keynote address, Yoshi-P presented fans around the world with concept art and video of vibrant new areas.

Some of these areas are completely new to the world of Final Fantasy XIV Online while others have been talked about in the past through lore. One prime example is Thavnair, a colourful and vibrant area by the sea which is also the origin of the Dancer job which was introduced in Shadowbringers.

Thavnair gives off a strong Indian/Middle Eastern vibe with lots of reds, blues and yellows in it’s architecture. The area is also surrounded by cliffsides striped vibrantly with purple tones throughout as well as lots of greenery.

One of Thavnair’s towns was also revealed during the keynote, this one is called Radz-At-Han. Rich in beautfiul architecture and detail, the sights and sounds of Radz-At-Han will instantly send you off to a different part of the world. Kind of like Stormblood did with it’s Eastern culture aesthetic.

Labyrinthos was another beautiful world shown during the keynote which comes with its own mysteries. The video reveal shows an environment completely surrounded by cliffs with lots of white and gold buildings. A major component about Labyrinthos that’s noticable in the video is that it’s housed underneath this dome-like structure with a large glowing sun-like thing hanging from the very top.

After the video was shown, Yoshi-P revealed that Labyrinthos is actually underground. The roof is obviously a fake sky with the large glowing thing up top being a fake sun. Labyrinthos’ history and how we get there however is a mystery as Yoshi-P deliberately refused to disclose such details.

Funnily enough, one of the higher-ups on the game did spoil a detail about Labyrinthos during the opening ceremony of FanFest Day 2. He mentioned his excitement while watching Day 1 while working at home, going onto mention something about Labyrinthos and monsters. The way Yoshi-P responded afterwards could of confirmed a spoiler that there are monsters within the area.

Garlemald, the imperial captial, was also touched upon during the keynote address and confirmed as an area that players will be able to visit in Endwalker. Garlemald is currently crumbling down and definitely shows in the images shown. 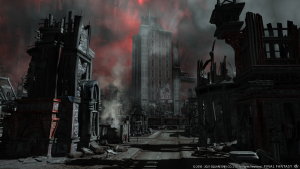 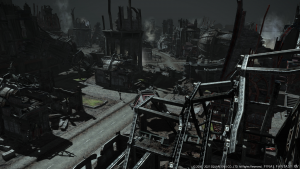 Yoshi-P also took us to one of the more exciting locations that’ll be introduced in Endwalker: the Moon. More specifically one of the Moon’s many areas that we’ll be exploring in the new expansion. Artwork and video for Mare Lamentorum were shown featuring the exterior and interior of a large tower, caverness environments and other exterior footage.

Yoshi-P also explained that from what we see in the video is that air and gravity have been confirmed on the moon. How? Well, apparently that’s mystery to be explained when the expansion launches.

While all of these new areas come with a lot of importance, there’s one in particular that most Final Fantasy XIV Online players will turn into their new hangout spot. Old Sharlayan is the new player hub for the Endwalker expansion.

Yoshi-P revealed during this segment of the keynote that Old Sharlayan was originally meant to be part of Final Fantasy XIV Online a long time ago. Back in 1.0, there was meant to be six starting areas. The original three areas – Ul’dah, Limsa Lominsa and Gridania – along with Ishgard in Heavensward and Ala Mhigo in Stormblood were the other five starting areas planned to be part of the original six.

However, there wasn’t enough time to execute all six which meant the team had to chop it in half. Time constraints mainly had to do with the story creation, with Yoshi-P adding that we would of needed a story for each of the 6 cities, which there was not enough time for.

Thankfully, the original six will now be complete in Endwalker. In-development footage of Old Sharlayan was also shown during the keynote. While it definitely looks like it’s yet to be finished, it’s overall design looks pretty amazing which can be seen in the video below.

Personally, I’m excited for all of these areas. But there’s one I really want to see more of but were only shown concept art for. And that’s of this floating city which sort of reminded me of the Seas of Clouds in Heavensward. But much more colourful from what we’re able to see so far. 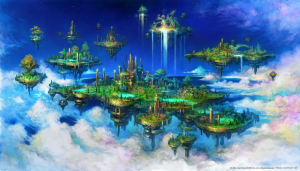 There are plenty more sights to see when Endwalker launches and Yoshi-P has confirmed that there will be the same amount as previous expansions. 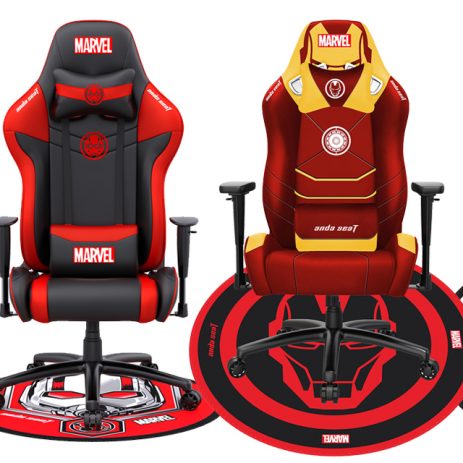